The Seahawks will host their divisional rivals, the Rams at Lumen Field Sunday. Kickoff is slated for 4:25 p.m. ET and the bout can be seen on FOX.

Seattle is in a must-win situation if it wants to earn a postseason berth as the No. 7 seed in the NFC. Should Pete Carroll and his team win, their fate would be in the hands of Detroit on Sunday Night football. A Lions’ win would ensure them a spot but if the Packers win they are eliminated.

Not many pundits and fans expected the Seahawks to be in contention for a playoff spot after trading away Russell Wilson during the offseason. This year was expected to be a rebuilding year.

Seattle (8-8) had lost three-straight games before ending the streak with a 23-6 win over the Jets last week. At one point the Seahawks were 6-3 but struggled with injuries and losses throughout the midpoint of the season.

In many other games around the league this week, starters will be rested. This contest will feature both teams playing their stars looking for a victory.

Bookmakers at FanDuel Sportsbook give the Seahawks a six-point edge over the Rams. On the moneyline, Los Angeles is +215 and Seattle is -260.

The game total for the contest is set at 41.5 points. Bettors have put 74% of their wagers on the Rams to cover the spread and 79% of the money on the Seahawks to win straight up.

Players to watch in the Rams vs. Seahawks contest

Baker Mayfield: The former No. 1 overall pick in 2018 signed for the Rams after being released by the Panthers. Since then he’s thrown for four touchdowns compared to one interception and holds a 2-2 record as the team’s starter. He’ll try and finish the season with a winning record for Los Angeles in hopes they’ll sign him again in the offseason.

Kenneth Walker III: The rookie running back has outperformed expectations this year and has accrued 199 rushes for 936 yards and nine touchdowns. The fourth-rounder needs just 64 yards and a score to hit 1,000 yards and double-digit touchdowns for the campaign. 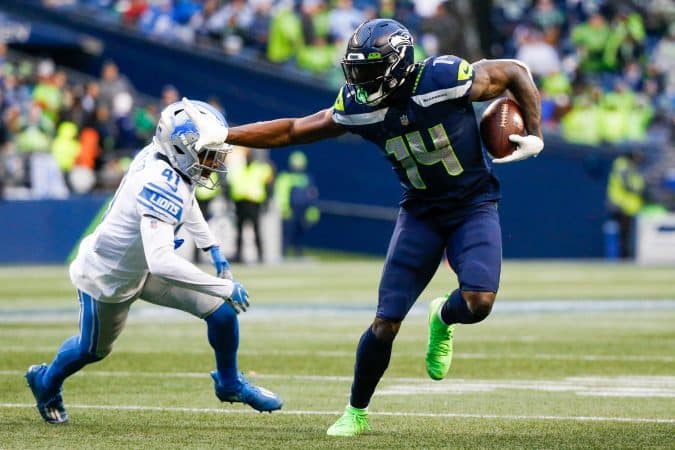 Our NFL bet of the week for the Rams vs. Seahawks

Seattle is set to be at full strength on offense with Tyler Lockett expecting to play. The Pro Bowl wide receiver played sparingly against the Jets and recorded just two catches for 15 yards.

Lockett is 21 receiving yards away from the 1,000-yard mark. He opens things up for Kenneth Walker III and the running game since defenses have to focus on him and Metcalf.

The Seahawks endured a bad run where they lost five of seven games recently. Most of the games have been competitive with four of the losses coming by one score or less.

Geno Smith has played well this season and was voted to his first Pro Bowl. Smith’s stats below showcase his breakout year.

The Rams have been poor offensively and are second-worst in the league posting an average of just 281.3 yards per game. The unit has scored just 18.2 points per game (26th).

Although Sean McVay’s team has won two of its last four games, the victories came against weak opponents in the Raiders (6-10) and Broncos (4-12). Against more quality opposition such as the Packers and Chargers, the Rams fell by 12 and 21 points.

Seattle is 7-9 against the spread this season and is 13-5 straight up in its last 18 games versus Los Angeles at home. The Rams are 5-10-1 ATS this campaign and have lost their previous six road games.

At ESTNN, we believe a full-strength Seattle team outmatches the Rams at most positions. Our pick is to take the Seahawks to cover an alternate 3.5-point spread on FanDuel Sportsbook at -154 odds.

The former West Virginia Mountaineer has thrown at least two touchdowns in 12 of the 16 games he’s played this season. He’s also hit the over-touchdown pass prop 75% of the time in 2022-2023.

In his previous 10 games, Smith has thrown for more than 1.5 touchdown passes eight times. With Lockett healthy again and facing a weak Rams’ defense, it’s probable he’ll once again beat the prop.

We believe it’s wise to bet him to throw over 1.5 passes at -117 odds on BetRivers Sportsbook. If you’re interested in learning about more prop bets for week 18, read our NFL player props page.

Frequently asked questions regarding Los Angeles vs. Seattle in Week 18

Seattle won its lone Super Bowl title in 2014. Carroll and company triumphed over the Denver Broncos, 43-8.