This Sunday in Week 17, the Los Angeles Chargers are hosting the Los Angeles Rams and the game is available for LIVE STREAMING with Caesars Sportsbook. NFL watch and bet is here so tune in for the Rams vs Chargers live stream.

With Caesars, fans can now use the NFL Watch & Bet feature for one game each Sunday, which started in December. The Caesars app will carry the NFL live stream, and you can always find odds before the game and during with live betting information.

For the Rams vs. Chargers game, Caesars has the following odds:

The Chargers opened as an 8-point home favorite before moving to 6.5 points at Caesars Sportsbook. There is no real home-field advantage in this game since both teams play at SoFi Stadium. The total opened at 40.5 points and has gone up a couple points heading into the weekend.

For our Rams vs. Chargers predictions, see our preview.

Thanks to a three-game winning streak, the Los Angeles Chargers (9-6) are back in the playoffs for the first time since the 2018 season. Justin Herbert (24-23) is finally over .500 for his career for the first time after a 20-3 win in Indianapolis last Monday night.

The Rams (5-10) have been eliminated for several weeks from the playoffs, but they won in dominant fashion, 51-14, on Christmas against Denver, a game that led to the firing of Nathaniel Hackett. Baker Mayfield completed 24-of-28 passes in his third game with the team against what was one of the best defenses this year.

You never know which team will show up now that the Chargers are in the playoffs and the Rams are coming off that huge win. The Chargers still could improve their play and seeding with wins, but the games are no longer do-or-die for them. The Rams mostly just want to continue seeing what they have in Mayfield as they finish these games out without the services of Cooper Kupp and Aaron Donald.

After Cam Akers rushed for 118 yards and three touchdowns against Denver, he could be the player to watch for in this one as the Chargers have struggled against the run throughout the year.

Last week was the first time in the last 15 games that the Chargers won a game by more than 10 points. Expect something closer this time.

Remember to check out our NFL best bets today for more betting ideas or for more NFL spread picks. 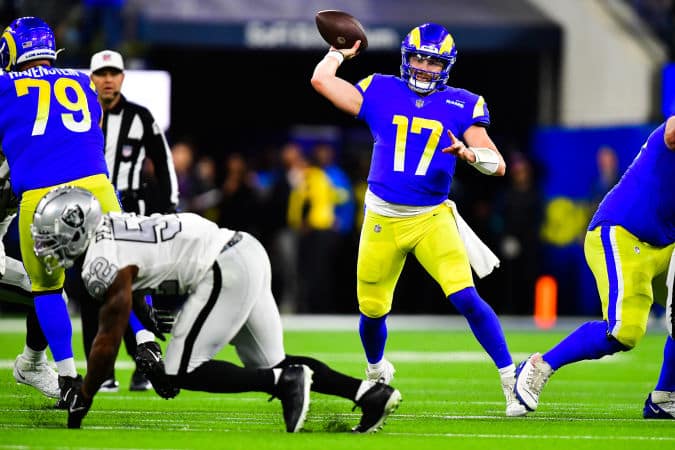 Rams vs. Chargers was going to be the Sunday Night Football game on NBC, but it was flexed out for Steelers vs. Ravens. You can watch the Rams vs. Chargers on your local CBS affiliate with Spero Dedes, Jay Feely, and Aditi Kinkhabwala on the call. Just tune into CBS for kickoff at 4:25 PM ET.

NFL+ subscribers can login from their favorite mobile device or computer to begin streaming the game live. NFL+ has a 7-day free trial and costs $39.99 per season. If you opt for the NFL+ Premium version, you also will get access to replays of older games, all-22 coaches film, and original content from NFL Films. The NFL+ Premium plan is $79.99 for a season, but with the season nearly over, there are reduced rates for the holiday. Only American users can subscribe to NFL+. If you are an international user, then you must subscribe with NFL Game Pass instead.

Games available on the NFL on CBS are also games you can stream if you are a Paramount+ subscriber in the US. Just log into your Paramount+ account and start streaming the CBS channel during the game to see it. Paramount+ plans start at $9.99 per month.

A very popular alternative to cable is Hulu + Live TV. This package comes with Hulu’s original content as well as plenty of movies, classic series, and live sports from all the major networks (CBS included). You also get the exclusive content from Disney+ and ESPN+. These subscriptions begin at $69.99 per month for US customers only.

Sling TV is another solid choice for cord cutters with live sports, movies, and news. Their plans range in price from as low as $40 per month to as high as $55 per month. All new users can receive half off their first month, and Sling TV is only available to US customers. Anyone trying to access Sling TV outside of the US will encounter a geo-block.

FuboTV is another strong streaming option with three different plans that vary in price from $69.99 to $99.99 per month. There is a free trial available for each plan. Users must be located in the United States, Canada, or Spain to use FuboTV.