The Las Vegas Raiders and Pittsburgh Steelers are both 6-8 and got some good news when the Jets lost on Thursday night to Jacksonville. Still, both have slim playoff chances. This game is more about renewing an old-school rivalry, especially with the Steelers planning to celebrate the 50th anniversary of the Immaculate Reception.

It may be the most famous play in NFL history, and the star of it, Franco Harris, was set to be honored with the retiring of his jersey number. Most unfortunately, Harris passed away in his sleep on Wednesday morning at the age of 72, so it will be a somber, emotional celebration in Pittsburgh this Saturday night.

It also expects to be the coldest game in Pittsburgh since 1989 with temperatures in the single digits at night. The Raiders are not used to winning games in cold weather like this, but they have a capable running back in Josh Jacobs. They also got tight end Darren Waller back and he caught a touchdown last week.

But the Raiders won on their own incredibly improbable play last week when the Patriots decided to lateral with overtime in their back pocket. An ill-advised lateral from Jakobi Meyers was caught by Chandler Jones for the shocking game-winning touchdown.

The Steelers roughed up Carolina on the road with Mitch Trubisky avoiding turnovers and engineering long drives with plenty of third-down conversions. He is expected to go back to the bench for rookie Kenny Pickett, who is returning from his second concussion.

But with the cold weather, this looks like a ground game between Jacobs and Najee Harris. The team that wins the line of scrimmage should win the game.

Players to watch in the Raiders vs. Steelers game

Maxx Crosby: He has been by far the team’s best defender with 11.5 sacks on his way to the Pro Bowl. Pickett has taken his share of sacks as an indecisive rookie who doesn’t want to throw picks like he did early in the season, so Crosby could clean up here with a couple more sacks. He also has 19 tackles for loss, which leads the NFL.

Najee Harris: What better way to honor Franco Harris than for a running back named Harris to rush for a lot of yards and score a touchdown or two to beat the Raiders? Harris has gone over 85 yards in four of his last six games, and he’s found the end zone in four of five games. He’s been a much better player since the bye week, and we know he’s going to be extra motivated to shine for Franco. His prop picks should be great plays this week. 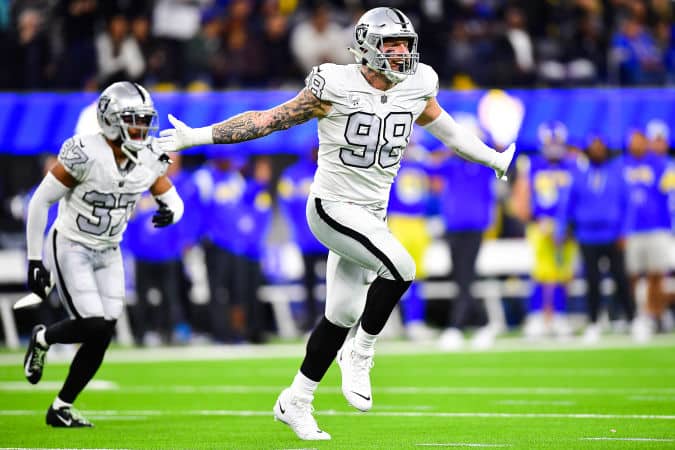 Our Best NFL Bets for the Raiders vs. Steelers game

We have two NFL Week 16 predictions for this classic matchup of two old rivals in the AFC.

The Raiders vs. Steelers spread opened with the Steelers as a 2.5-point home favorite and it has consistently stayed around there.

I would say it is Pittsburgh’s game to lose, but this season has shown that the Raiders are the best team at finding ways to lose games. They nearly blew a fifth lead of at least 13 points against the Patriots last week, but New England bailed them out with that lateral.

Josh McDaniels’ game management has been poor this season. Derek Carr has not been very good in all these close games either, and he has not completed more than 55% of his passes the last three weeks. Pittsburgh’s defense has played better since the bye and so has the offense.

Kenny Pickett is a wild card in weather this cold, but you have to expect the Steelers to have a conservative game plan that minimizes his mistakes and leans on the improved running game with Najee Harris and Jaylen Warren. Diontae Johnson is also coming off a very good game and is still looking for that first touchdown of the season. Maybe that can be his Christmas present.

Coaching still matters in the NFL as evident by the seasons for these teams. The Raiders find interesting new ways to blow games while the Steelers have improved on both sides of the ball since the bye week.

Let’s trust Mike Tomlin to rally the troops again and seize the moment in front of a home crowd that will be there to honor Harris’ legacy. Take the Steelers to cover for your NFL bet of the week.

This will not end 13-7 like The Immaculate Reception did, but it should be a low-scoring game. Derek Carr is 0-6 with the Raiders when the temperature is under 38 degrees. He failed to lead the Raiders to 20 points in any of those six games, and this should be the coldest game yet in his career.

The Steelers are a mediocre scoring defense this year, but their only terrible defensive games were against the likes of Buffalo, Philadelphia, and Cincinnati. The Steelers have held their last four opponents to 16 or 17 points. They have held the last 7-of-9 opponents under 19 points.

The Raiders are not a great defense and have just one game with multiple takeaways, so it does not feel like a game where the Pittsburgh offense will feed the Raiders short fields on a bunch of turnovers.

The Steelers also showed an incredible turnaround with the run defense last week. After getting embarrassed with 215 yards on the ground by the Ravens, the Steelers embarrassed the run-heavy Panthers by holding them to 21 rushing yards. They stonewalled Chuba Hubbard and D’Onta Foreman in that game.

Jacobs is the NFL’s leading rusher with 1,495 yards, but this running game is not as diverse as what the Ravens run with the mobile quarterback being part of their success. Jacobs is closer to facing Foreman, so last week was good practice for getting back to basics for the Steelers. Jacobs will get some yards, but this shouldn’t be one of those games where he goes off for 140-plus yards like he’s done five times this year.

Let’s trust T.J. Watt and company to get after Carr and keep that winless streak in cold weather alive. The best way to do that is to hold the Raiders under 19 points.

Frequently asked questions about the Raiders vs. Steelers game in Week 16

Since 2007, the Steelers under Mike Tomlin are 25-8 SU and 15-17-1 ATS in prime-time games at home in the regular season. He is 5-1 SU in his last six such games. The Steelers last beat Cleveland 26-14 in Ben Roethlisberger’s final home game.