Few could have imagined the Las Vegas Raiders (5-7) and Los Angeles Rams (3-9) would enter this game with so few wins after what they did last year. But too many disappointing losses early and too many injuries as of late for the Rams have led to this point.

But the Raiders have won three in a row and the defense was at its best all season against the Chargers on Sunday, holding Justin Herbert to 13 offensive points and sacking him five times. Maxx Crosby continues to have a great season with 10.5 sacks.

Josh Jacobs is leading the NFL in rushing with another huge game, and Davante Adams is leading the NFL with 12 touchdown catches as he averages a career-high 14.9 yards per catch this season. It’s really a shame this team tied the NFL record by blowing three 17-point leads, because this is a dangerous offense with just two players dominating the ball right now.

The Rams may still be without superstar Aaron Donald on defense, another big blow to a team that has lost Matthew Stafford and Cooper Kupp. The Rams claimed quarterback Baker Mayfield off waivers on Tuesday, but it would be a mistake to rush him into the game on such a short week. But backup John Wolford is also banged up, so the team may be limited at what it can do at that position.

Players to watch in the Raiders vs. Rams game

Josh Jacobs: With the Raiders, you get to see one of the best wide receivers (Davante Adams) in the league and one of the best running backs in Jacobs this year. He has five games with 140-plus rushing yards this season after having no such games in his first three seasons. Jacobs should win the rushing title as he leads with 1,303 yards, almost 200 yards more than runner-up Nick Chubb (1,119 yards).

Tutu Atwell: He did not have a touch on offense during his rookie season, but with Cooper Kupp and Allen Robinson out, it is time to unleash Tutu Atwell. He had a 54-yard catch against Dallas, a 62-yard touchdown against the Saints, but the Rams have waited until now to get him more involved. He had the team’s only 30-yard play against the Seahawks last week. He is the only real big-play threat in this offense right now. 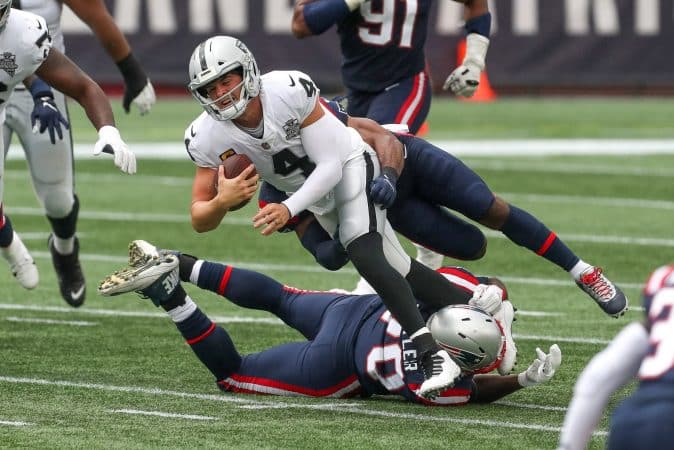 Our Best NFL Bets for the Raiders vs. Rams game

We have two NFL Week 14 predictions for this non-conference matchup on Thursday.

The Raiders vs. Rams spread opened with the Raiders as a 5.5-point road favorite. The line has moved up to 6 points, which is a lot for any team led by Derek Carr.

This would only be the second time Carr is favored by more than 4 points on the road in his career. The last was as a 7.5-point favorite against the 2020 Jets. He needed a Hail Mary touchdown with the Jets blowing the coverage on an all-out blitz to win 31-28.

Since 2014, the Raiders are 13-9 SU and 6-16 ATS as a favorite of at least 3.5 points. Without Stafford available, the Rams have failed to cover +6 in three of the last four games, but they did step up in Seattle and nearly won before allowing a late touchdown in a 27-23 game.

The Raiders should win this game, but they have a bad habit of making every game close because they usually only play one great half. Sean McVay won’t want to be embarrassed at home in prime time, so we think the Rams could do enough on offense to keep this close in the fourth quarter. The Rams are also good against the run, so maybe this won’t be another 140-yard game for Jacobs.

Davante Adams to Score and Raiders to Win (-165)

Adams is on fire after a season-high 177 yards against the Chargers. He also had his fourth game this season with multiple touchdown catches. He has gone over 100 yards in his last two regular-season games against the Rams, and he caught a touchdown against Jalen Ramsey in the last playoff meeting between the two with Green Bay in 2020.

Adams will take the Ramsey matchup well, and the Raiders can move him around to get him open on different defenders. Adams has caught at least one touchdown in eight games this season. He is still the most consistent receiver in the league when it comes to scoring touchdowns, and we are seeing him do it from further away than just the red zone this season.

Adams’ last nine touchdowns are all from 25-plus yards. That matches the total of 25-yard touchdowns Adams had in 2017-2020 combined. It is also the first time in his career he’s ever scored from 25 yards out on consecutive touchdowns, and the streak stands at nine. Crazy stuff for someone who played eight years with Aaron Rodgers.

We already highlighted why we like the Raiders to win the game. Might as well parlay it with an Adams touchdown and take advantage of that pick at BetMGM for your NFL bet of the week.

Frequently asked questions about the Raiders vs. Rams game in Week 14

The game is being played at SoFi Stadium in Los Angeles, California.

The worst record for a defending Super Bowl champion is 6-10 by the 1999 Denver Broncos, who lost John Elway to retirement and reigning MVP running back Terrell Davis to injury after four games. The 2022 Rams can match the 10 losses with a loss here and take the record even lower with four more games to go.

You can always check out our player prop picks and daily NFL predictions.