After two dominating performances by the Suns and their 2-0 lead in the Western Conference semi-finals against the Mavericks, the series are moving to Dallas for the next two games. Can the Mavs win Game 3 or will the Suns come one step closer to a sweep?

After the first two games of Western Conference semi-finals, the Phoenix Suns are looking like a true contender. That’s hardly surprising given the fact that they were the top seed in the league ahead of these NBA playoffs, but they’ve definitely proven that they mustn’t be overlooked. The Suns go to Dallas with a 2-0 lead in their pocket, hoping to continue their winning streak over the Mavericks in Game 3.

Meanwhile, the Mavericks never looked like winning in the first two games of the series. Even though Luka Doncic is having a great playoffs, at least on the offensive end, the rest of the team doesn’t seem up to par for this stage. Of course, things can look different in the next game since the Mavs will now play at home, but they need to do much better if they hope to beat the Suns.

So, here are my picks and predictions for Friday’s NBA matchup between the Phoenix Suns and Dallas Mavericks. 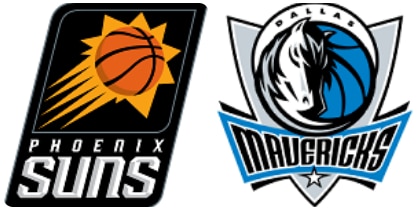 After the first two games in which the Suns were favored by around six points, now the two teams are matched when it comes to money line odds, although if you want to bet on spread, the Suns are 1.5-point favorites. We were a bit surprised to see that given the performances by these teams in two games in Phoenix, but the Mavs will now host Game 3, so that’s understandable.

Meanwhile, line for total points has once again gone up compared to the previous game. That’s not surprising since we saw 238 points in Game 2. So, a points total of 219.5 points doesn’t seem unusual with that in mind.

Before we proceed with our picks for Game 3 of the Phoenix Suns vs Dallas Mavericks series, you should also check out our daily NBA betting tips and our NBA playoffs parlay tips.

Now, let’s take a closer look at our betting tips for Suns vs Mavericks Game 3:

Yes, Game 3 will be played in Dallas after the first two games have been played in Phoenix. Yes, Luka Doncic is having a historic playoffs and if we can see another of Mavs’ players step up, that would put Dallas in a good spot to notch a win in this series. All of this is true – but we don’t see Dallas winning Game 3.

First of all, the Suns thoroughly dominated the Mavericks in the first two games. The Mavericks came to this stage as one of the best defensive teams in the league, and they failed to keep the Suns from scoring over 120 points in both games. Also, the Suns have now beaten the Mavericks in eleven straight games, so that’s another chip on the shoulder for Dallas. All in all, the Suns are the better team of the two and we have no doubt that they will get to the Conference Finals. So, we can see them taking Game 3 as well.

So, we expect the trend from the first two games of the series to continue in Game 3, at least when it comes to total points. With that in mind, our prediction for this game is over 219.5 total points.

After two games in which he struggled from the field after coming back from his injury, Devin Booker exploded in Game 3 and scored 30 points on 11-19 from the field. So, it seems like Booker is getting back into the form in which he was at the start of the playoffs before he was injured, and that’s bad news for the Mavericks.

With Dallas already lacking in size in the paint, they now have to worry about Devin Booker as well, in addition to the constant that is Chris Paul. The number of threats on the Suns team is great and that will once again open a lot of room for Booker to operate and, as we expect, score 27 or more points.