As expected, both the 76ers and the Heat made it to the Eastern Conference semi-finals and now they will fight for a spot in the Conference Finals. Will the Heat take the lead at home or will the 76ers surprise them in Game 1?

The NBA playoffs have reached the semi-finals in both conferences and one of the matchups in the Eastern Conference is the Philadelphia 76ers vs Miami Heat duel. The 76ers enter this game after an emphatic win in Game 6 over the Raptors, which came after the team nearly blew a 3-0 lead. But they showed in Game 6 that they are capable of dealing with pressure.

Meanwhile, the Heat were pretty confident in all of their games against Atlanta Hawks in the first round, losing just one of them, barely. So, they certainly proved that they deserved the first seed in the Eastern Conference and they enter the series against the 76ers as the favorites, especially with Joel Embiid injured at the moment.

So, here are my picks and predictions for Monday’s NBA matchup between the Philadelphia 76ers and Miami Heat. 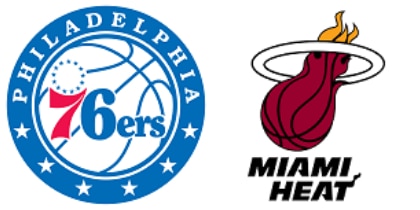 The Heat are the clear favorites ahead of this game and the spread is set at 8.5 points. This might seem like a lot for conference semis, but Joel Embiid is already ruled out of Game 1 and that certainly affected the odds and the spread. If you want to include this game in your betting, check our NBA playoffs parlay picks as well.

Meanwhile, the line for total points is set at 208.5 points. Once again, this might seem like it’s too low, but the 76ers will miss their top scorer and that’s bound to affect their output on offense. On the other hand, Embiid’s presence in defense will be missed as well, which could open up more options for the Heat to score.

So, we’ve talked about some of the key aspects to keep in mind ahead of Game 1 and you should also check our daily NBA predictions for betting tips on other NBA games. However, now it’s time to get a closer look at our 76ers vs Heat betting tips:

As we already mentioned, Joel Embiid will miss Game 1 of the series, at least, after suffering an orbital fracture and concussion in Game 6 against the Raptors. So, with their best player out, the 76ers go to Miami severely handicapped and we don’t see them avoiding a loss in this game.

We would expect the Heat to win the game even with Embiid playing, but without him, we can see Game 1 ending in a blowout for the home team. After all, the entire game plan for the 76ers revolves around Embiid and with Miami in great form, we don’t see how the 76ers can come under the spread in this one.

Three of the four head-to-head duels between the 76ers and the Heat in the regular season have gone under total points and we can see that happening again in the playoffs. That being said, the line is a bit low for our taste, but all three of those games in regular season that have gone under ended with fewer than 209 points being scored.

So, with Embiid out of Game 1 as the 76ers’ top scorer, we can certainly see the guests struggling to put up points on the board, especially since the Heat are capable of playing great defense.

Once again, Embiid’s absence will impact the output of other players of the team. After all, someone will have to carry the offensive load instead of him and our pick is James Harden. Yes, Harden didn’t have the best of series against Toronto and the most points he scored in a game was 22.

But now he will have to put up more shots and we all know that Harden can put up big numbers when everything revolves around him, which will be the case in Game 1.