The New England Patriots (7-6) are the No. 7 seed in the AFC going into Week 15, but they have the same record as the Jets and Chargers. The Patriots also have a brutal schedule to end the season, so it is crucial they win this game against the Las Vegas Raiders (5-8) if they want to make the playoffs.

The Raiders have found the most incredible ways to blow games this season. They just tied another NFL record by blowing four 13-point leads in one season, but the last was arguably the most improbable yet as Baker Mayfield led two touchdown drives for a Rams offense he just joined two days earlier. The 17-16 loss also covered up a poor gam from quarterback Derek Carr, who threw a costly interception before halftime.

The big subplot to this one is that Raiders coach Josh McDaniels was Bill Belichick’s longtime assistant in New England, and there is no doubt the Hooded Genius misses him. Matt Patricia has not done a good job of replacing McDaniels’ role this year, but the Patriots were able to win 27-13 in Arizona last week. They usually come through to beat teams with losing records the last two years.

But McDaniels can point to an overtime win over Belichick in 2009 when he was with Denver. It helped him start 6-0 that year, then it has been all downhill ever since for his head coaching career. McDaniels is 10-25 since that hot start.

The NFL Week 15 odds have the Raiders as a 1-point home favorite with a total of 44.5 points. Will Belichick avoid going 0-2 against his trusted assistant?

Players to watch in the Patriots vs. Raiders game

Hunter Henry: It seems to take a dome game for the Patriots to remember that Hunter Henry is very useful in the passing game. He had a season-high 63 yards in Minnesota on Thanksgiving, and he set another season high with 70 yards in Arizona on Monday night. The Raiders have struggled with tight ends, and the Patriots have had a lot of injuries to pass catchers in recent weeks. This could be another big game for Henry, who averaged 53.4 yards per game against the Raiders when he was with the Chargers all those years.

Chandler Jones: He was a first-round pick by the Patriots in 2012, but it was really in Arizona where Jones became one of the best pass rushers in the league. Few were as good at turning pressures into sacks than Jones. But in his first year with the Raiders, he only has 4.5 sacks and 17 pressures in 13 games, putting it on track to be his worst season. But maybe he’ll perk up against the Patriots, and Mac Jones has struggled with sacks behind New England’s line at times this year. 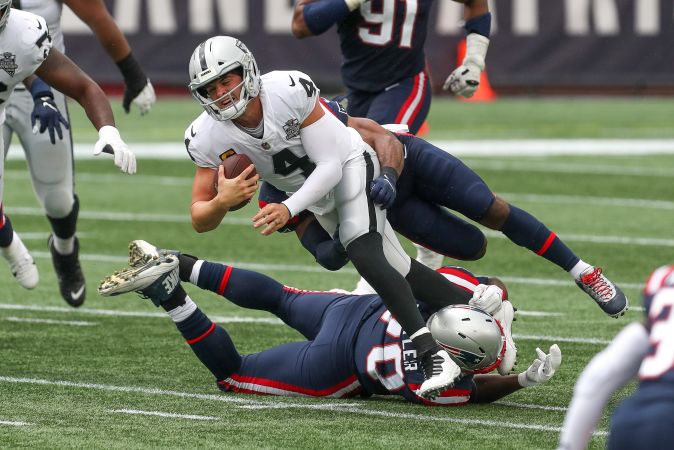 Our Best NFL Bets for the Patriots vs. Raiders game

We have two NFL Week 15 predictions as Belichick matches wits with McDaniels.

The Patriots vs. Raiders spread opened with the Raiders as a 1.5-point home favorite. The line has come down a half point at many sportsbooks going into the weekend.

The Raiders are certainly better than their 5-8 record, but this team just forgets to play 60 minutes of football. They can give you a strong 30 minutes, but the other half is often a mess.

The offense clearly has major talent in Davante Adams and rushing leader Josh Jacobs, but Belichick is usually good at taking away one of your major weapons. The Patriots are solid against both the run and pass, though Jacobs has been so good, that they may let him get a few more carries if it means Carr is struggling to find Adams. The Raiders don’t have much in other receivers outside of Mack Hollins.

For the Patriots, it really is about the defense controlling the game. Mac Jones is 3-0 this year when he takes four sacks or more, which is obviously silly and not ideal. As much as Jones may hate the “quick game” as a passer, the truth is he’s 4-0 when his average pass travels under 6.0 yards this season and 1-5 when it goes deeper.

The Patriots are 0-6 when they allow 20-plus points and 7-0 when they allow fewer than 20. They may need to buck that trend this year as the Raiders’ lowest-scoring home game this year was 20 points against the Colts, a game they still lost to an inexperienced coach (Jeff Saturday).

With the Patriots having more to play for and the better coach, let’s go with New England as your NFL bet of the week. Even if the Raiders come out strong in this game, you just cannot trust them to close the deal. If Baker Mayfield can do two late touchdowns on his new team without Cooper Kupp, then surely Jones can get a few touchdown drives in this one.

You can visit our NFL picks page for more betting tips.

The Raiders have played in their share of high-scoring games, but that would not be ideal for the Patriots. The defense also might be too good to give up more than 24 points to this Raiders offense that is largely driven by two players (Jacobs and Adams). With Carr not being a mobile quarterback and playmaker, and the Raiders not having great depth at the skill players, this just doesn’t seem like the kind of offense that will give Belichick’s defense fits.

Even when McDaniels beat Belichick in 2009, that was a 20-17 game in overtime. It’s not like McDaniels’ scheme fooled the master.

Five of the last six New England games have finished under 41 points. The Raiders are coming off that 17-16 mess against the Rams.

This feels like a 23-20 type of game that hits the under.

Frequently asked questions about the Patriots vs. Raiders game in Week 15

The game is being played at Allegiant Stadium in Las Vegas, Nevada.

Only two players have rushed for 100 yards against the Patriots this year, and one was quarterback Lamar Jackson (107 yards). Green Bay’s Aaron Jones (110 yards) is the only running back to do it to them this year. Josh Jacobs has six 100-yard rushing games this season.