It’s always must-watch television every time the New England Patriots and Green Bay Packers face off. However, this rivalry has lost quite of its appeal since Tom Brady left town. Still, watching Bill Belichick’s game plan to try and stop Aaron Rodgers is always a treat to the eyes.

Rodgers and the Packers are fresh off a big, albeit boring win over Brady and the Tampa Bay Buccaneers. However, Matt LaFleur’s overly-conservative game plan seemed to be holding his quarterback back for most of the game. That could be due to the Packers’ lack of strength in the receiving corps.

The Patriots have been far from a contender this season, dropping their season opener vs. the Miami Dolphins and then barely beating the struggling Pittsburgh Steelers in Week Two. They did look a lot better offensively vs. the Baltimore Ravens but still couldn’t finish the job.

There’s plenty of speculation about Bill Belichick’s future beyond this season, as he’s been in charge for way too long and may not want to be a part of a rebuild. But then again, you never know what to expect from one of the greatest masterminds in NFL history. 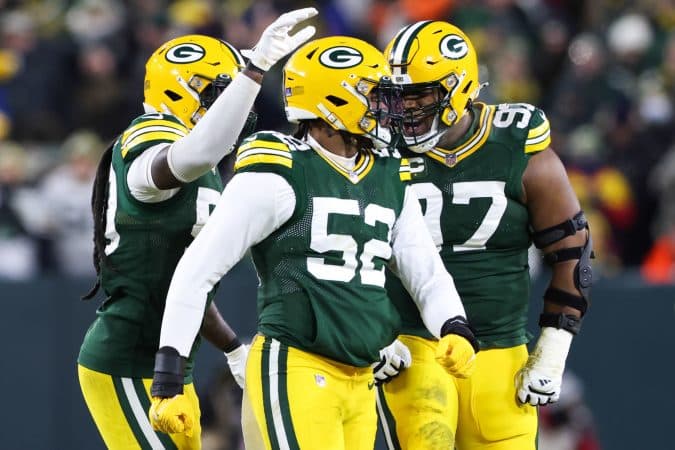 Rhamondre Stevenson: Patriots beat writers hyped up Rhamondre Stevenson before the start of the season and predicted he’d have a big role in their offense as a pass-catching back. He finally woke up and broke out with 73 yards and one touchdown on 12 rushes and added 4 receptions for 28 yards.

Romeo Doubs: Aaron Rodgers raved about Romeo Doubs in the offseason and it seems like he’s earned his trust. He was his favorite target vs. the Buccaneers, hauling in all 8 of his targets for 73 yards and 1 touchdown, including a beautiful 21-yard grab. Maybe Rodgers has found his new WR1.

Week 4 Predictions: NFL Bet of the week on Patriots vs Packers

The opening Patriots vs Packers spread has the home side favored by 10.5 points, which seems like a bit of a stretch right now. Yes, the New England Patriots aren’t any good right now, but Bill Belichick doesn’t get blown out too often, and he usually has these sorts of games marked in his calendar.

The Green Bay Packers were inefficient and showed no sense of urgency or aggressiveness in last week’s matchup vs. the Tampa Bay Buccaneers. They can handle bad teams like the Patriots with ease, but it seems like they’re not willing to take any chances right now.

So, even though we don’t expect the Patriots to win this game by any means, we still believe that laying 10.5 points is way too much. Their defense is competent enough to keep the Packers’ new-look offense in check and at least hang around.

Also, both teams are likely to favor the running game in this matchup. That will keep the clock running and prevent either side from running away with this one. The Packers will most definitely win, just not by more than 10 points.

The Patriots vs Packers odds have this game sitting at just 41 points, which speaks volumes of the approach both teams have taken to start the season. Matt LaFleur doesn’t seem to want to put a lot of pressure on his unproven receiving corps, and Bill Belichick has never been an offensive-minded coach.

LaFleur is holding Aaron Rodgers back, but that approach has worked thus far. The truth is the Packers don’t have a lot of weapons right now, so maybe trusting Aaron Jones and AJ Dillon to do most of the heavy lifting isn’t a bad choice at all.

Mac Jones, on the other hand, has regressed from his rookie season, but it’s not like he was all that good, to begin with. The Patriots feature a mediocre set of receivers, so we can expect another plethora of screen passes and their RB committee to do most of the job.

All things considered, this game has the makings of another snoozefest like that Bucs vs Packers matchup from last season. So, even though the total might seem quite low with Aaron Rodgers on the field, this might as well fall way below.

He hasn’t talked about retiring after the season yet.

Of course, all you need to do is visit our NFL picks daily page.

Yes, and you can check them out on our NFL odds page.