For the second year in a row, the Buffalo Bills (12-3) can end the season of the New England Patriots (8-8). The Patriots hope to clinch the final Wild Card spot but face a daunting task of beating an emotionally charged Buffalo team.

The Bills are receiving encouraging news about safety Damar Hamlin after his cardiac arrest incident on Monday night in Cincinnati. He is improving and his teammates sound ready to play their hearts out for him this week.

It appears the NFL is ruling Bills-Bengals a no contest and it will not be completed. It is not clear if the Bills will get to host an AFC Championship Game or if that will be played at a neutral site this year due to the imbalance in games played for the Bills and Bengals and the rest of the field.

But it is clear that the Bills are a whole tier above these Patriots, and they have done a great job of beating them since 2020. Josh Allen is 5-1 against the Patriots in his last six starts, and only the extreme wind game in 2021 tripped him up. He has not thrown a single interception against the Patriots in five straight games, which is what that defenses feasts on to help out its struggling offense. The Patriots have scored a defensive touchdown in four straight games, the first team to do that since the 2002 Buccaneers.

But those Buccaneers won the Super Bowl and had a historic playoff run. These 8-8 Patriots will be very fortunate just to sneak into the tournament again. The NFL Week 18 odds have the Bills as a 7-point home favorite with a total of 42.5 points.

Players to watch in the Patriots vs. Bills game

Matt Judon: The edge rusher has made the Pro Bowl the last four seasons, but he has been at his best in 2022 with 15.5 sacks. Anything he can do to disrupt this offense would be appreciated as the Patriots are 4-1 when Judon registers more than 1.0 sack this season. Judon has 3.5 sacks of Allen in his career when facing the Bills.

Stefon Diggs: Few players were as emotional as Diggs was for his teammate Damar Hamlin this week. Knowing his teammate is doing well, look for Diggs to shine. He hasn’t caught a touchdown in his last three games but his last one was against the Patriots. He has five touchdowns in his last five games against the Patriots and averages 85.7 yards per game against Bill Belichick’s defense. 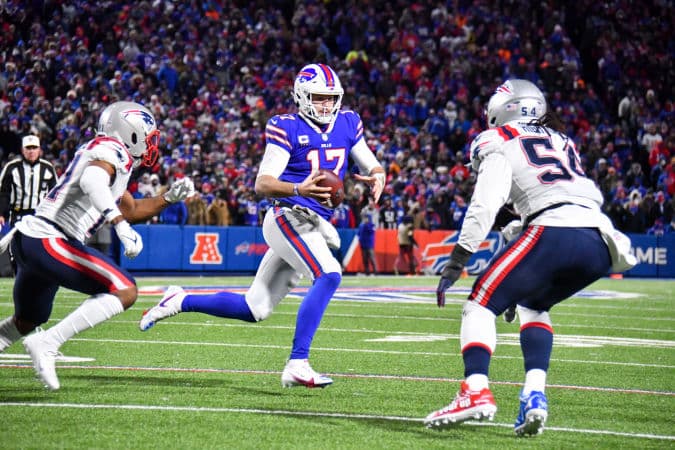 Our Best NFL Bets for the Patriots vs. Bills game

We have two NFL Week 18 predictions for this AFC East rematch with playoff implications.

The Patriots vs. Bills spread opened with the Bills as an 8-point home favorite and it has gone down a point going into the weekend.

This is such an emotional week for the Bills, but we have seen instances in the past where a player lost a close loved one and had to go play a game a short time after. Think of Brett Favre against the 2003 Raiders just after his father passed away. He was magnificent that night and the team rallied around him in a dominant win.

But this is a whole team that went through a traumatic experience, and now they return home to play in front of one of the most loyal fanbases in the league. That stadium is going to be electric for this one, and it is hard to see how the Patriots stand much of a chance.

Because the Bills did not get the worst news possible this week. They do not have to worry about grieving the loss of a teammate and preparing funeral services. Damar Hamlin is going to beat this incident thanks to the work of first responders. He is improving, and one of the first things he asked when he woke up was if Buffalo won the game.

His brothers are going to rally around him and continue on with the mission they’ve had all year of winning a Super Bowl. Maybe the No. 1 seed they had their eye on to have the playoffs go through Buffalo isn’t going to happen now, but that is okay. This team is battle tested and ready for anything.

Take the Bills to cover the spread and beat the Patriots again for your NFL bet of the week.

bet on nfl with wynnbet >

Call it double dipping, but we are all over the spread in this one and for the Bills to win big. They already beat the Patriots 24-10 back in Week 13. New England’s only touchdown that night was a screen pass to a corner (Marcus Jones) playing his first offensive snaps of the season. They won’t get fooled again.

Matt Patricia’s offense is terrible despite having the best average starting field position in the league, and they are the worst when it comes to the red zone.

Allen has been magical against the Patriots as evident by that brilliant touchdown in Week 13 when he didn’t step out of bounds before throwing the ball near the sideline. Belichick has not found answers to stop him unless it involves extreme wind.

The Patriots just do not score enough on offense to hang with these Bills. They won’t get a defensive return touchdown for the fifth game in a row. They are more likely to lose by 30 points again like they did in the playoff meeting, the last game these teams played in Buffalo against each other.

It may not be 47-17 again, but a repeat of 24-10 or better is certainly more than doable. That crowd is going to be incredible Sunday, feeling a collective sigh of relief that Hamlin survived one of the scariest incidents any of us have seen on a football field.

Now it’s time for the Bills to get back to their winning ways and take care of these Patriots.

Frequently asked questions about the Patriots vs. Bills game in Week 18

The game is being played at Highmark Stadium in Buffalo, New York.

Since Josh Allen’s breakout year in 2020, the Bills are 12-9-2 ATS as a home favorite, one of the better records in the league in that time.

Since 2020 without Tom Brady, the Patriots are 6-8 ATS as a road underdog. Only five teams have a worse record in that time.