The NFC South is up for grabs as the Tampa Bay Buccaneers (7-8) host the Carolina Panthers (6-9). Tampa can win the division with a win in this game. Carolina can take the division lead into Week 18 with a win here but will not clinch without another win or Tampa Bay loss next week.

This is the biggest game of Sam Darnold’s career, and it is probably not even in the top 75 biggest games for Tom Brady’s career. That difference is part of the reason why the Buccaneers are still expected to win despite what happened when these teams met in Week 7.

The Panthers won 21-3 in a game with no turnovers by either team, and P.J. Walker outplayed Brady. Walker was efficient (16-of-22 for 177 yards and two touchdowns), and that is all Darnold needs to be in this one. Do not try to be the hero. The Buccaneers were ran over for 181 yards by D’Onta Foreman and Chuba Hubbard, though 60 of those yards came on one play for Foreman.

But that is the formula for Carolina. Run the ball, throw it efficiently, and play great defense. The Buccaneers managed just one field goal on 11 drives that day. Tampa Bay has scored more than 23 points in just one game this season.

Carolina is inconsistent too, so it should be an interesting one. The NFL Week 17 odds have the Buccaneers as a 3-point home favorite with a total of 40.5 points.

Players to watch in the Panthers vs. Buccaneers game

D’Onta Foreman: An unexpectedly good replacement for Christian McCaffrey, Foreman has been feast or famine for the Panthers this year. With five 100-yard games under his belt, the Panthers are 5-1 when he rushes for at least 74 yards. But the Panthers are also 0-3 in the games where Foreman was held to a total of 56 yards, including 9 yards against the Steelers. Which Foreman shows up this week? It will depend on the run blocking most likely.

Mike Evans: When these teams last met, Mike Evans dropped a wide-open touchdown on the opening drive. No one was around him deep down the field, and it seemed to set the tone for the day for the offense. Let’s see if he can rebound in this matchup against a Carolina defense that won’t have corner Jaycee Horn (wrist surgery). 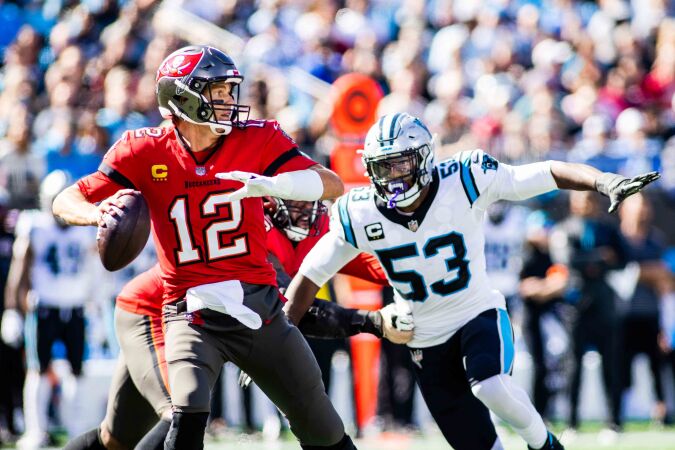 Our Best NFL Bets for the Panthers vs. Buccaneers game

We have two NFL Week 17 predictions for the NFC South Game of the Year.

The Panthers vs. Buccaneers spread opened with the Buccaneers as a 7.5-point home favorite before moving down considerably to a 3-point edge.

Tampa Bay is 3-11-1 ATS this year, which is on pace to give them the worst spread record in over 20 years. So, maybe it is time for some regression, but it will likely come down to which version of the Carolina running game shows up.

The Panthers have as many games with 220-plus rushing yards (three) as they have with no more than 40 yards this season. They went from 232 yards against Atlanta to 36 against Baltimore. They snuck a 21-yard rushing game in between games of 223 and 320 the last three weeks.

This is maddeningly inconsistent, but the surprising part is that Sam Darnold has been consistent in his four starts with the team this year. His 58.9 QBR would be the best of his career and he has yet to throw an interception. If he can avoid the turnovers in this one, he definitely has a shot.

The Buccaneers are 0-7 when allowing more than 16 points this season. This team lives for hanging around for three quarters, waiting for the defense to get tired, then Brady starts moving the ball in the no-huddle and picking apart prevent defenses even though he has no intention to throw the ball 10 yards down the field unless he is fishing for a pass interference penalty.

The Tampa run defense is middle of the pack this year at best, but it has been a lot better at home. All five games where Tampa has held the opponent under 70 rushing yards have been at home.

Carolina was so incredible on offense last week with 570 yards (320 rushing), but there is a reason the Lions have spent most of this season ranked dead last on defense. Look for the Tampa defense to keep the Panthers contained this week, and for the Buccaneers to pull out the game in the fourth quarter to claim one of the worst divisions since the merger for your NFL bet of the week.

You can always read our NFL picks page for more betting tips.

It was 21-3 last time, but we will see more points in this game. But Tampa Bay has not scored more than 21 points or allowed more than 16 points in any win this season, so if we are going with a Tampa Bay win as predicted above, then it should be in the neighborhood of another 19-16 type of game like last week.

It is hard to look past what the Panthers just did two weeks ago when Mitch Trubisky led the Steelers on a 12-minute touchdown drive in Carolina. That was a Matt Canada-coached offense that went 12-of-16 on third down and had a 12-minute touchdown drive. Save your Byron Leftwich criticisms. The Steelers were able to get the job done with Trubisky. Of course Brady can dink and dunk his way against a defense missing its best corner.

Tampa Bay cannot win a shootout this year, and the Panthers are not really looking for one with Darnold at quarterback anyway. All signs point to the under in this one as the division title is at stake and both teams still pride themselves on being tough and physical as they are being coached by defensive-minded coaches in Todd Bowles and Steve Wilks.

Frequently asked questions about the Panthers vs. Buccaneers game in Week 17

The game is being played at Raymond James Stadium in Tampa, Florida.

No, Darnold has never gone longer than four straight games without an interception, which is where he stands going into Sunday, the biggest game of his career with the playoffs on the line.