Packers (+7.5) to cover vs. the Eagles Alternate Spread

The Packers will travel to Lincoln Financial Field in Philadelphia to take on the Eagles during primetime. The Sunday Night Football bout is set for 8:20 p.m. ET and NBC will broadcast the matchup.

At 4-7, it’s an absolute must-win game for Green Bay if it wishes to sneak into the playoffs. Every game on the schedule likely needs to be won. Two more losses would give the team a sub-.500 record.

After a 3-1 start to the season, the Packers have lost six of their last seven games. Green Bay’s offensive line, passing game and receivers have underperformed.

Rodgers is playing with a broken thumb and key players such as rookie wide receiver Romeo Doubs are hurt. LaFleur’s team enters the game after a rough 27-17 loss to Tennessee last Thursday.

The Eagles (9-1) have the best record in the entire NFL and are led by star quarterback Jalen Hurts. Both the former Oklahoma quarterback and his Eagles are the third-betting favorites to win MVP (+600) and the Super Bowl (+650)

Philly is coming off a 17-16 comeback win over the Colts. The Eagles trailed by six with 4:37 left to play before Hurts put together an 11-play, 75-yard scoring drive. A seven-yard scamper into the end zone with 1:20 remaining sealed the victory.

The current moneyline odds for this matchup on BetMGM Sportsbook are Green Bay (+230) vs. Philadelphia (-300). Oddsmakers favor the Eagles as 6.5-point favorites at -110 odds. Among the public, 55% of spread bets have been placed on the Eagles to cover, while 60% of the money is on the Philadelphia to win straight up.

Players to watch in the Packers vs. Eagles contest

Aaron Jones: The electric running back is on pace for his first 1,000-yard season on the ground since 2020. Jones is also a threat through the air and has recorded at least 1,000 scrimmage yards for five straight seasons. His rookie year in 2017 is the only instance where he hasn’t. In 2022-2023, the former UTEP Miner has rushed for 778 yards and two scores. Through the air, Jones has 248 and two touchdowns.

A.J. Brown: The Pro Bowl wide receiver has been an X-factor for Philadelphia this year after the team acquired him in the offseason for the 18th pick in the draft. Brown has 49 catches for 785 yards and six touchdowns. He’s averaging 16 yards per reception and 78.5 receiving yards per contest. 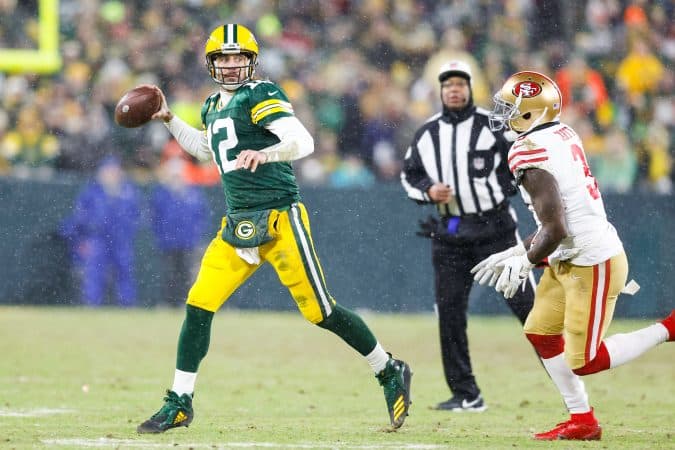 Our NFL bet of the week for the Green Bay vs. Philadelphia

Primetime divisional bouts have been close in most matchups this season. The Packers have been poor but they’ve lost the last four games by an average of seven points.

Green Bay is very inconsistent. It appeared the team was getting back on track after a 31-28 win over Dallas only for the offense to sputter again a week later.

Hurts’ MVP-caliber season has shown he can easily sling the football while limiting turnovers. The 24-year-old is completing 68.3% of his passes. His stats below show how successful he’s been thus far in 2022.

The dual-threat signal-caller has also rushed for 354 yards and three scores. Hurts is averaging 5.6 yards per carry.

Green Bay is 4-7 against the spread this year but are 6-2 ATS in their last eight games against Philadelphia. The Eagles are 5-5 ATS but are 2-4 ATS in their previous six games.

We think this game will be close toward the end and advise bettors to take the Packers to cover an alternate 7.5-point spread. BetMGM sportsbook is offering the wager at -140 odds.

After dealing with injuries during the early portion of the season, the second-round receiver has finally burst onto the scene and become the weapon Rodgers had desired. He could still use a lot more help though.

Watson scored three touchdowns in the comeback win over Dallas at Lambeau Field. The North Dakota State product became the first rookie to record three scores in a game since Randy Moss in 1998 ironically against the Cowboys.

The 23-year-old followed up the stellar performance five days later with a pair of touchdowns versus Tennessee. The 6-foot-5 playmaker has become the ideal red zone target for the NFL’s back-to-back MVP.

Watson has four red zone looks in the last two weeks and with the receiving corps depleted, he’ll have plenty more opportunities against the Eagles.

The +240 is a valuable line to take at Bet365 Sportsbook. We think Watson has a high likelihood of breaking the plane for a third-straight week.

Frequently asked questions regarding Green Bay vs. Philadelphia in week 12