The Green Bay Packers have lost two in a row and are in danger of falling behind the Washington Commanders in the NFC standings if they lose this game too. The Packers were once 21-0 SU under head coach Matt LaFleur as a favorite of at least six points, but they are 0-3 ATS in that split the last three weeks, and they lost outright to the Giants in London and by 17 points to the Jets, the worst home loss of Aaron Rodgers’ regular-season career.

Meanwhile, the Commanders have a quarterback change as Carson Wentz fractured his finger in the 12-7 win over the Bears, leaving the job to 2021 starter Taylor Heinicke. He led Washington into Lambeau last year and lost 24-10, but Washington piled up a season-high 430 yards of offense. It was a brutal day in the red zone with Washington also missing a field goal, losing a fumble, turning it over on downs twice, and Heinicke throwing a pick from the Green Bay 12 in the fourth quarter.

If Washington can move the ball as well as it did last year, this is going to be a nail biter with the way the Packers have been playing. The NFL Week 7 odds have the Packers as a 5-point road favorite with a total of 41 points in this matchup.

Players to watch in the Packers vs. Commanders game

Allen Lazard: He is only third in catches but still leads the Packers in receiving yards (285), and last year he had 60 yards and a touchdown against Washington. Lazard has caught a touchdown in four out of five games he has played this season. He is a far cry from Davante Adams, but Lazard is the best healthy weapon Rodgers has left.

Brian Robinson: He scored his first NFL touchdown against Chicago in his first career start, a great story for the rookie who was shot before the regular season started. Robinson doesn’t have a great offensive line, but he runs hard and could be a problem for a Green Bay defense that was just shredded by Jets rookie back Breece Hall. 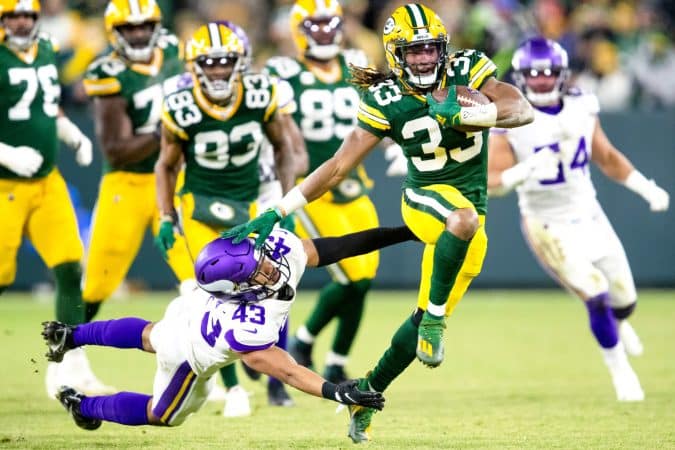 Our Best NFL Bets for the Packers vs. Commanders game

We have two NFL Week 7 predictions for this NFC matchup of two of the oldest franchises.

The Packers vs. Commanders spread opened with the Packers as a 3-point road favorite and it has moved up to 4.5-to-5 points going into the weekend.

This one is a tough call. LaFleur is 10-2 ATS after a loss, though he did just lose to the Jets in that situation. Since 2019, Washington is a league-best 11-6 ATS after a win, though head coach Ron Rivera has started 2-6 in his first two seasons with Washington.

The instinct to react negatively to Heinicke starting against Rodgers just is not there anymore. Not after seeing Rodgers struggle with teams quarterbacked by Bailey Zappe, Daniel Jones, and Zach Wilson the last three weeks. Rodgers is currently 25th in QBR (38.4), which would be the worst season of his career.

Heinicke could even be an improvement to this offense over Wentz, who takes too many sacks and is not that elusive anymore. Heinicke has good mobility, and he had this offense moving up and down the field in Green Bay last year. They just had a terrible day of finishing drives. Green Bay’s defense only has four takeaways this season.

The closest the Packers have come to looking like the old Packers this year was a 27-10 home win against Chicago, their NFC North whipping boys. Every other game has been a loss or a dogfight with the Packers winning 14-12 in Tampa Bay and needing overtime to finish off the Patriots.

The Packers need to rebuild some confidence that this is still a good team, or even a wild card team with the way things are going. Trusting Washington is always tough, but the right call should be to take the Commanders with the points here. Green Bay -5 would have been a losing bet in seven of the team’s last eight games.

Aaron Rodgers had a career-high 480 passing yards against Washington in 2013, but that feels like a lifetime ago when you look at the quarterback he is right now. The Packers have scored 43 points in three games away from Lambeau Field this season.

The over is just 2-4 in games this year for both teams. Washington came out playing two high-scoring games with the Jaguars (28-22) and Lions (36-27), but none of their last four games have topped 38 points.

Washington’s defense finally had two takeaways against the Bears, the defense’s first takeaways since Week 1. You do not expect takeaways from Rodgers, but he did throw a pick-six at home to the Patriots.

Let’s go with the low-scoring, close game that should ultimately favor the underdog Commanders and the under for your NFL bet of the week.

Frequently asked questions about the Packers vs. Commanders game in week 7

As a starter, Aaron Rodgers is 4-3 against Washington, including a 2-0 record since 2019 under head coach Matt LaFleur. He has thrown 16 touchdowns to one interception in the seven games.

Be sure to bookmark our player prop picks and daily NFL predictions.