With six NFL wild card games this weekend, we looked through the playoff odds and found our two favorite NFL picks.

The Seahawks made the playoffs against all odds, but the 49ers just happen to be a bad matchup for them. The 49ers shut down the run as well as anyone, so it is unlikely Kenneth Walker, who had 47 yards in Week 15, will get going here. That puts pressure on Geno Smith, who already was shutout on offense in Week 2’s trip to San Francisco.

Geno has not been a mess against this defense this season, but he has 13 points in eight quarters and averages 5.9 yards per pass attempt. They just do not give up any big plays or let DK Metcalf or Tyler Lockett do much against them. It is hard to see Seattle scoring more than 17 points in this game unless rookie Brock Purdy implodes with turnovers to set up short fields.

But Purdy has been fantastic given his inexperience and he has 13 touchdown passes in six games. The 49ers have 13 wins this year and 10 of them were by double digits. Trust the 49ers to cover at home.

The last time we saw the Bills in a home playoff game, they had arguably the greatest offensive performance in NFL history with seven touchdowns on seven drives in the snow against Bill Belichick’s defense last January in a 47-17 win.

Buffalo won’t be that good this week, but look for the Bills to pounce early on the overmatched Dolphins, especially if Damar Hamlin is in attendance. The crowd will be into it, and the Bills are a team that likes to start fast. The spread is big and the Dolphins could certainly chip away at it or even get a backdoor cover, so there should be more value in the first half spread with Buffalo only needing to be up by a touchdown to cover it.

In Week 15, the Bills led 21-13 at halftime even with the Dolphins running the ball well that night and having Tua Tagovailoa at quarterback. Without Tua and possibly without Raheem Mostert too, this is Buffalo’s game to shine and get an easy win for your NFL bet of the week. 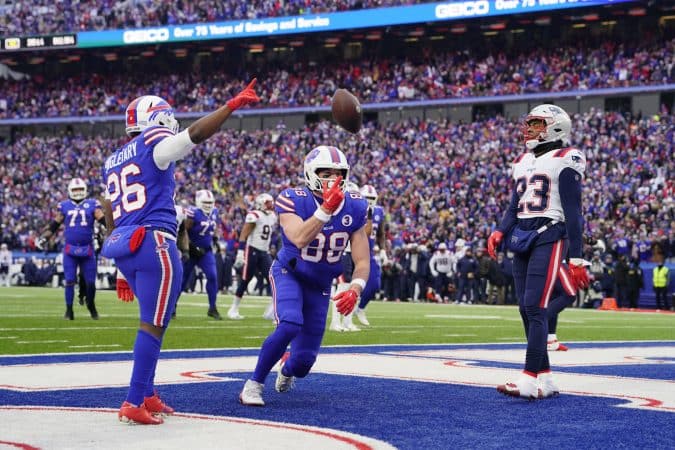 Every wild card game this week is a rematch from the regular season, which has not happened since the 2009 season.

The No. 2 seed 49ers will look to win their 11th game in a row and improve to 3-0 against the No. 7 seed Seahawks this year. The 49ers have allowed 13 points on defense in two games against Seattle. The 49ers are attempting to become the first team in NFL history to get to a Super Bowl with a rookie quarterback, but they are loaded with talent and come in red hot. Nick Bosa could win the Defensive Player of the Year award.

The Seahawks just made it on the final night of the season after Detroit eliminated Green Bay. Seattle had some rough losses late in the year to Las Vegas and Carolina but coming back late in two games against the Rams helped them finish with a winning record. Rookie running back Kenneth Walker could win the Offensive Rookie of the Year award.

Quarterback Geno Smith could win the Comeback Player of the Year award had a career year and made the Pro Bowl while throwing 30 touchdown passes and leading the NFL in completion percentage, but he has his work cut out for him against the No. 1 defense on the road. The 49ers allow the fewest yards, points, and have the second-most takeaways this season.

We will get to see the playoff debuts for quarterbacks Justin Herbert and Trevor Lawrence as these teams are making their first playoff appearances since the 2017 (Jaguars) and 2018 (Chargers) seasons.

The Chargers (10-7) finished strong after a 6-6 start, but they will have to overcome a 38-10 loss at home to these Jaguars in Week 3. It was the team’s worst performance of the season on both sides of the ball. But Herbert, who had a rib injury at the time, is a gamer and should keep this one much closer.

The Jaguars (9-8) were 2-6 before rallying to win the AFC South, completing Tennessee’s full collapse with a win in Week 18 after forcing Josh Dobbs to fumble for a late touchdown. But Lawrence has had a breakout year in Doug Pederson’s offense, and Pederson has won four playoff games with the Eagles, including a Super Bowl in 2017.

This one could be high scoring and close, but hopefully it will be more competitive than the Week 3 meeting. The Chargers have the better quarterback, but they are at a disadvantage with the long travel and one fewer day to prepare.

These teams split their regular-season series with the cumulative score at Buffalo 51, Miami 50. However, the Dolphins lack a healthy quarterback right now and Tua Tagovailoa, who led the NFL in several passing efficiency metrics, is out with a concussion.

It could be rookie Skylar Thompson, who averages 5.1 yards per attempt, almost 4.0 full yards fewer than Tagovailoa (8.9), who led the league. If Teddy Bridgewater starts, he can’t seem to avoid throwing bad interceptions this year. It may be a longshot for running back Raheem Mostert to play too after surgery this week. He had 136 rushing yards in Week 15 when these teams played a 32-29 game.

Buffalo has not lost since that ridiculous Week 10 game against Minnesota when a fumbled quarterback sneak for a touchdown stole a sure win from the Bills, who still finished 13-3 and the No. 2 seed. The Bills may also be led out by Damar Hamlin, who was released from the hospital and is doing well after suffering cardiac arrest on the field. The Bills are a heavy favorite in this one and it would be one of the all-time playoff upsets if they did not easily advance to the next round given Miami’s quarterback situation.

These teams are here after winning so many close games, but no one did it better than the Vikings, who tied the NFL records with eight game-winning drives and fourth-quarter comebacks. They also pulled off the biggest comeback in NFL history with a 33-0 rally against the Colts.

But the Vikings (13-4) are the first team in NFL history to win more than 11 games despite having a negative scoring differential. They beat the Giants 27-24 in Week 16, but the Giants moved the ball very well in that game and it came down to a 61-yard field goal by the Vikings. It was also the only game this year the Giants blew a fourth-quarter lead in. These teams are 16-0 at upholding a one-score lead in the fourth quarter when they aren’t playing each other.

This will be the first playoff start for Giants quarterback Daniel Jones, and both coaches (Brian Daboll and Kevin O’Connell) are also rookies. This has the chance to be the most competitive game of the weekend as the Vikings only know how to get blown out or win close, and the Giants usually do not score enough points to blow teams out.

These teams just met last week in a sloppy Week 18 game won 27-16 by the Bengals. But it could look closer to that game again if the Ravens have to start third-string rookie quarterback Anthony Brown again. The Ravens had four turnovers and were down 17-0 in a hurry.

But the Bengals have not gained 300 yards of offense in either matchup this season with the Ravens, a big difference from 2021 when Joe Burrow passed for over 400 yards in both games. But the Bengals are playing much better football than the Ravens since their Week 5 meeting, and they are 10-1 since that night.

It does not sound like Lamar Jackson, who has not practiced in over a month, will be able to play in this game. The Ravens stand a better chance with Tyler Huntley at quarterback than Brown, but it could be Brown again. At least he got some experience against this defense last week and division games can be crazy, but it is hard to see the Ravens playing well in this game. Cincinnati looks better than the team that lost the Super Bowl last year.

Maybe the game of the week just for the drama potential on Monday night when the Buccaneers host Dallas. The Cowboys are the only team with double-digit wins Tampa beat this year way back in Week 1 in a 19-3 game that injured Dak Prescott. But before the injury, Prescott played terrible, and we haven’t seen him look like that again until Week 18 in a shocking upset loss in Washington.

The Cowboys are turning the ball over way too much, which plays right into Tampa Bay’s hands as they feast on mistakes and short fields. The Tom Brady-led offense is the worst of his career, and he had a losing record (8-9) for the first time. But Brady knows a thing or two about coming back to beat a Dan Quinn-coached defense, and Mike McCarthy sure knows a thing or two about blowing a playoff game on the road.

The Cowboys are a road favorite but do not be surprised if the Buccaneers win their third straight game against them since 2021 as Brady is 7-0 against the Cowboys in his career.

Frequently asked questions about the NFL wild card round

The wild card is the first round of the NFL playoffs. It was created in 1978 when the league expanded to a 16-game season, and the league expanded from eight playoff teams to 10 playoff teams. Today, the wild card round features some of the lower-seeded division winners against the teams with the best records who did not win their divisions but still qualified for the playoffs.

Excluding the strike year in 1982, from 1978 to 1989, there were two wild card teams in each conference, and they played each other. In 1990, the league moved to 12 playoff teams, creating a wild card weekend with four games total (two in each conference). In 2002, the wild card was reconfigured with eight divisions to have the No. 3 and No. 4 seeds (both division winners) host the No. 5 and No. 6 seeds (both wild card teams). In 2020, the league expanded again to 14 playoff teams, creating six wild card games (three in each conference) with the No. 7 seed playing at the No. 2 seed as only one team gets a bye now. In 2021, the sixth wild card game was played on a Monday night, making it a three-day event for the first time.

The winners of wild card weekend advance to the divisional round where they will play each other based on seeding and the No. 1 seeds who had first-round byes will also host games.