The New Orleans Pelicans vs Phoenix Suns series in the first round of Western Conference playoffs is almost here and if you want to know what channel is Pelicans vs Suns on and how to watch the game online, we can hep you out.

So, here are some of the best ways to watch New Orleans Pelicans vs Phoenix Suns online.

The first game of the NBA playoff series between New Orleans and Phoenix is scheduled for Sunday and it will be broadcast by TNT, but there are some good live streaming options you can check out too for this duel:

Since TNT is broadcasting the game, you can also stream the game on their app. To stream the game through the TNT App, you will have to enter your TV provider credentials or use some of the live streaming services that we will cover in this article.

In addition to many other channels for sports fans like ESPN, ABC, or NBA TV, you can also watch TNT if you have a YouTube TV subscription. This is, overall, one of the best options for streaming NBA games, but it’s not a cheap option since the most basic plan costs $64.99 per month. That being said, you can take advantage of their one-month trial to watch NBA playoffs.

The basic subsription plan for DirectTV includes channels like TNT, ESPN, and ABC, but if you want to add NBA TV to the mix, you will have to upgrade to their $84.99-per-month plan. You can watch DirectTV streams on the web, but you can also use your streaming devices (Apple TV, Chromecast, Fire TV, and Roku) or mobile platforms like Android and iOS.

While most of people know Hulu + for their great content when it comes to movies and TV shows, this streaming service has some interesting sports channels too. The Hulu + Live TV subscription costs $69.99/month and includes TNT, ESPN, ABC, but it doesn’t include NBA TV.

Another live streaming platform that carries TNT is Sling TV and they also offer ESPN and ABC, so they are a good choice for watching NBA playoffs. They are also pretty affordable with their most basic subscription plan starting at $35/month.

The Phoenix Suns enter this series as the top-seeded team in the entire league, so it’s clear that they are the favorites to progress to the next round. The Suns have been great the entire season and they are currently healthy, at least when it comes to their main pieces, and we considered all of this when we wrote our betting tips and predictions for Pelicans vs Suns.

Meanwhile, the Pelicans managed to secure a spot in the playoffs through the play-in tournament, which they entered as the ninth seed in the West. However, New Orleans eliminated the Spurs first, then they beat the Clippers in LA to secure their place in 2022 NBA playoffs and schedule a duel with the Suns. Unfortunately, Zion Williamson remains out for the team after missing the entire regular season too. 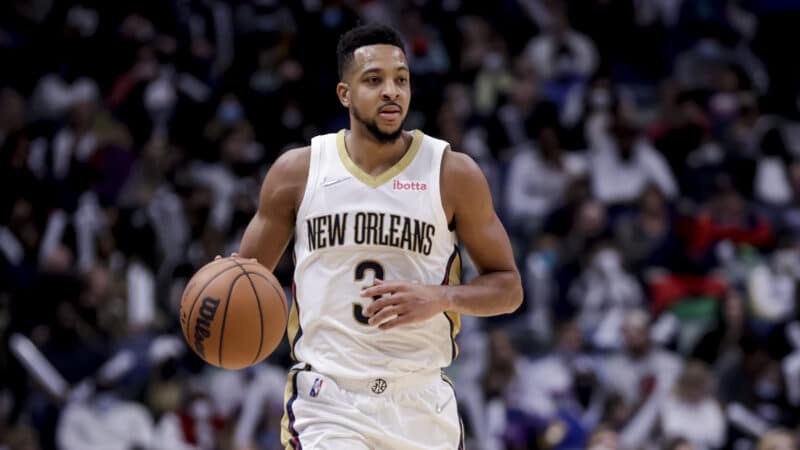 FAQ for Pelicans vs Suns Game 1

The venue of the game is the Footprint Center in Phoenix.

Zion Williamson remains out for the New Orleans Pelicans, along with Kira Lewis Jr. Meanwhile, the Suns will be without Dario Saric and Landry Shamet.

There are many legal betting options you can check out, including some of the most popular betting sites like BetMGM, BetRivers, Caesars, FanDuel, DraftKings, etc.

As expected, the Suns are huge favorites here, so the spread on their win is set at -10.5 points.

Pelicans vs Suns Game 1 – Best Betting Sites to Check Out

For those interesting in betting on the first game of the New Orleans Pelicans vs Phoenix Suns series, here are some of the top bookmakers to check out: