A new exciting season of college football is right upon us. That means that the odds to win National championship are already out there and ready to change depending on how much we overreact after the first two weeks of the season. But those who’ve been around for long know better than to rule out or praise a team after just a handful of games.

As some of you may know by now, we’re in for an unprecedented college football season in 2022. The transfer portal nearly exploded due to the new NIL agreements, so there was more movement than ever. Some think this is bad for competition; others disagree. Whatever the case, it’s nice to see that players can finally — and legally — make real benefits from their efforts.

But as much as some of the coaches from the top-ranked programs complained, the NCAA football championship odds haven’t changed all that much. Yes, we’ll see some old faces in new places, but the teams expected to compete at the highest level will continue to be the same until further notice.

The NCAA playoffs odds are no surprise right now. Once again, Alabama, Ohio State, and Georgia look like sure postseason material and currently sit near the top of the NCAA Football Championship odds table. It’s been like that for a while, and that’s not likely to change any time soon. So, without further ado, let’s take a look at the current picture and the teams with the highest NCAA football championship odds.

Also, if you’re looking to make the most of these odds, don’t forget to visit our best college football betting apps page. 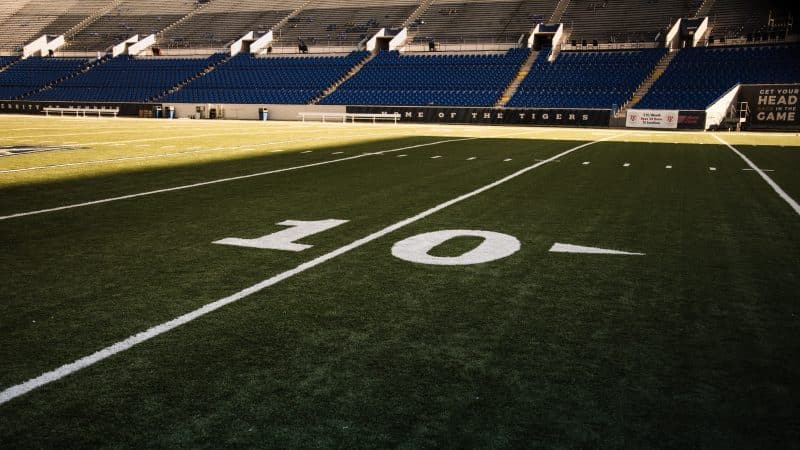 See what we think about the chances for each of the top NCAA Football teams in the country.

The NC State Wolfpack enter the year as the 13th-best team in the nation, according to the Associated Press. This shouldn’t come as a surprise after the team lost just three games last season, with two of those losses coming on the road and by a combined grand total of four points.

While not spectacular, this team is consistent and constantly underrated, mostly because they have to share the spotlight with the Clemson Tigers. But this team could mess around and surprise more than one of its haters, with QB Devin Leary ready to prove that he can lead this team going forward.

Ok, this is your first and final warning: Overlook the Oklahoma State Cowboys at your own risk. This team should’ve won its conference last season, and is stacked enough at both sides of the football to mess around and make the playoffs in 2022. You’ve been warned, so don’t sleep on your laurels.

The Cowboys had an electrifying offense last season and Mike Gundy gives the program the continuity some of their conference rivals are lacking right now. They know they can take over the conference as Texas and Oklahoma are looking to leave the Big 12, and that kind of motivation can go to great lengths.

With USC and UCLA leaving the Pac-12, the Oregon Ducks should only be worried about the Utah Utes in their conference. As for their NCAA football championship odds, chances are that they won’t get any higher, especially depending on their competition.

The Ducks have an elite program, all of the money, a state-of-the-art facility, and two national championship appearances in the past 12 years. However, they continue to find ways to lose games they were supposed to win, so it’s not surprising to see that oddsmakers aren’t giving them that much love this time around.

The Baylor Bears were one of the most surprising teams in the nation last season. They were supposed to go through a rebuild after a tough 2020, yet they got their very-first 12-win season, a Big 12 championship, and a win on the Sugar Bowl after winning just two games the year prior.

Of course, not many people will be surprised by the Bears this season, but they’ve slowly become one of the teams to watch in the Big 12. Dave Aranda has proven to be better than expected, and the Bears shouldn’t be overlooked anymore, even with Gerry Bohanon leaving to join USF.

Once again, the Oklahoma Sooners are among the top 10 teams in terms of odds to win National championship. But whether they’ll be able to keep up with the rest of the pack is still a big question, as their well-documented shortcomings have become more usual every year.

Dillon Gabriel is ready to take over as the Sooners’ new QB after posting quite interesting numbers in three seasons at UCF. There should be patience with Brent Venables as he tries to get the players to buy into his philosophy, but patience is something Sooners fans aren’t known for.

Jim Harbaugh was somewhat on the hot seat last season, so beating lifelong rivals Ohio State sure did wonders for him. But more than that, the Wolverines were a gritty, physical, tough team that was just great to watch, and that identity will remain even if star DE Aidan Hutchinson is no longer with them.

Winning that Big Ten championship was a much-needed boost for one of the nation’s most prominent programs. It sure took him a while, but Harbaugh seems like the right guy to take the Michigan Wolverines back to the top of the world. Don’t you ever sleep on this team.

The Utah Utes figure to be the saviors of the Pac-12 for years to come. UCLA and USC will try their luck in the Big Ten, but it’s not like they have found a lot of success in their own conference. Simply put, the Oregon Ducks are the only team that could represent a challenge for the Utes, so they could become a bit of a dynasty.

CB Clark Phillips, QB Cameron Rising, RB Travion Thomas, and OT Braeden Daniels headline a Utes team with plenty of starters coming back on both sides of the football. They may not be ready to take on the SEC powerhouses to win the Natty, but they’re definitely going to have a good time in their conference.

The Texas A&M Aggies have been through a lot over the past couple of years. Some argue that their move to the SEC was bad for their ability to compete for a playoff spot, but it’s sure toughened them up and has put the program in the right direction, attracting money, attention, and a championship-winning coach.

Now, the Aggies need to take a step forward and prove that they can sit at the big boy’s table in 2022. They’ve been lurking in the shadows and have slowly become an elite program, but they’re still a couple of years away from that.

Even though some claim they were snubbed of a spot in the playoffs last season, the Notre Dame Fighting Irish didn’t complain. They kept grinding and getting better for the upcoming campaign, which shows with their current NCAA football championship odds.

Aiming for the Natty could be a bit of a reach for the Irish, but it’s not like they’re pushovers. Marcus Freeman has provided some continuity, even though there will be growing pains without Brian Kelly, as they’ve shown already.

We all knew the Clemson Tigers weren’t going to be ‘bad’ for long. Dabo Swinney is back at it, and the Tigers still rank among the teams with the highest odds to win National championship after a terrible year by their standards. Yeah, because a 10-3 season isn’t impressive anymore when you’re a program like Clemson.

The Tigers struggled with injuries on their defense for most of the season, and their offense was far behind what we were used to seeing from them. Still, and despite their pedigree, it seems like they’re not ready to go back to Natty contention.

The Georgia Bulldogs have proven that they can win ugly football games, even when their lockdown defense has a bad day. They’ve been the most dominating team in the nation since day one, and it doesn’t seem like they’re going to slow down any time soon.

Stetson Bennett has been solid for the most part, and the Bulldogs are well-coached and well-balanced. They know what it takes to win at the highest level, and not even losing some of their biggest studs to the NFL Draft has hurt their chances. Barring a disaster, they should win back-to-back titles this season.

The Ohio State Buckeyes sure know how to make some noise. Their offense has been the best in the nation, and it’s not even close, and C.J. Stroud continues to make a case for being the first-overall pick in the upcoming NFL Draft. He’s sure shown that week in and week out, and he’s only getting more comfortable.

The Buckeyes currently have the second-highest NCAA football championship odds, and it seems like they’re not going to cave in. They’ve played with a chip on their shoulder after last season’s loss to Michigan, and they’ve been a wreaking ball on the offensive side of the field.

Death, taxes, and Alabama making the playoffs. It’s been like that for a long time, but that might as well change this season. Reigning Heisman winner Bryce Young has struggled with injuries for most of the season, and Nick Saban’s team hasn’t been the steamroller it’s usually been.

The Crimson Tide have officially fallen out of the top teams in terms of the highest odds to win the championship. They’ve looked quite beatable for most of the season. They’re not even a top-10 team in terms of odds right now, but it’s way too early to talk about the end of ean era or anything like that.

What are College football futures?

Perhaps the NCAA football futures bets with the most yearly traction revolve around the Heisman Trophy. The Heisman is handed out to the best player in all of college football. Needless to say, this award is rarely given to first-year players, and more often than not, it’s a competition between the nation’s top-tier QBs and RBs.

This award has been given out 86 times and has been won by 85 different players, with Ohio State Buckeyes legend Archie Griffin as the only player to earn that distinction award. Notably, Bryce Young has a chance to replicate that milestone, as he’s got the second-highest odds to win the Heisman at +400.

Other NCAA football futures bets center around whether a team will win the National Championship or if they’ll end up on top of their division. Unsurprisingly, the highest NCAA playoffs odds go to the AP’s top-25 ranked teams, a list that varies every week depending on their performances.

Notably, this ranking is put together by an individual panel of experts. These experts put together an individual list of the top 25 teams in the nation, based on their performance, the strength of schedule, metrics, their roster, and even some intangibles. Then, all rankings are combined to put together the national ranking, with the first-place vote giving 25 points, 24 for a second-place vote, and so on until the 25th spot.

But even though the NCAA playoffs odds seem reserved for the top-tier programs, that can always change throughout the season, and being a top-25 team by the end of the campaign is no guarantee to clinch a postseason berth.

To Make The Playoffs

The NCAA playoffs odds will change throughout the campaign, as every team must abide by some criterion to be playoff-eligible. In fact, just four teams selected by a panel of 13 individual experts wind up making the playoffs every year, with the winner being crowned as the National Champion.

The rest of the teams go through a series of ‘Bowls’ that grant them different trophies. To be bowl-eligible, a team must get at least six wins and a winning percentage above .500 throughout the regular season. A total of 82 teams round up the 41-Bowl game pools.