The NBA playoffs have completed the first round with all the higher seeds advancing in both conferences. Will we see any of the upsets or Game 7 drama in the NBA second round playoffs with the final eight teams?

How the NBA’s Second Round Works

Each conference has two series in the second round, also known as the semifinals. Each series is another best-of-seven with four wins needed to advance to the Conference Finals.

Since the higher seeds all won in the first round, we have two matchups in each conference between the No. 1 vs. No. 4 seed (Miami Heat vs. Philadelphia 76ers, Phoenix Suns vs. Dallas Mavericks) and the No. 2 vs. No. 3 seed (Boston Celtics vs. Milwaukee Bucks, Memphis Grizzlies vs. Golden State Warriors).

All series will again follow the home-road format of 2-2-1-1-1 with the higher seed kicking things off at home in Game 1 and having home-court advantage for Game 7 if necessary.

The top-seeded Miami Heat beat the Atlanta Hawks in five games and will host the Philadelphia 76ers, who beat Toronto in six games. The defending champion Milwaukee Bucks will open on the road against the No. 2 seed Boston Celtics, who have been the hottest team since January.

Eastern Semis: No. 1 Miami Heat vs. No. 4 Philadelphia 76ers

Miami was 2-2 against the 76ers this season, including a bad loss in the last meeting when Joel Embiid and James Harden were inactive. But Embiid’s availability for this series is an unknown after he suffered an orbital fracture and concussion in Game 6 against Toronto. There is no timetable for his return beyond him being out for Game 1.

It would be very difficult for the 76ers to get past a tough Miami defense without the league’s leading scorer, but that could be the case here. Jimmy Butler and Kyle Lowry both missed Miami’s series-clinching win against Atlanta, but neither injury is considered serious, and Butler should be back for Game 1.

Eastern Semis: No. 2 Boston Celtics vs. No. 3 Milwaukee Bucks

The teams split the season series 2-2, though most of the matchups took place before January when the Celtics improved into an elite team on both sides of the ball. The Bucks are facing another tough road back to the NBA Finals, though they’ll have to win this series without Khris Middleton (MCL).

Giannis Antetokounmpo is the reigning Finals MVP, but he is going to face one of the best defenses in the league without his wing man. Jrue Holiday must have a big series, though the Boston duo of Jayson Tatum and Jaylen Brown is up to the task. The Celtics were the only team to sweep in the first round, shocking the Nets in four games. 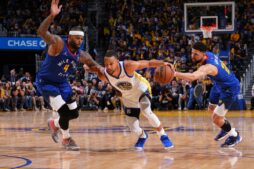 The top-seeded Phoenix Suns needed six games to beat the New Orleans Pelicans, and they will host the Dallas Mavericks, who won Game 6 in Utah. The other matchup looks like a good one between the No. 2 Memphis Grizzlies and No. 3 Golden State Warriors with the latter trying to reach its sixth NBA Finals since 2015.

Western Semis: No. 1 Phoenix Suns vs. No. 4 Dallas Mavericks

Phoenix was 3-0 against Dallas this season, though every game was decided by seven or eight points. The Mavericks always have a chance to keep it competitive as long as Luka Doncic is healthy, and he returned for the team in Game 4 against Utah to close that series for Dallas’ first playoff series win since the 2011 NBA Finals.

The Suns had an injury scare to Devin Booker in the first round, but he was able to return for the Game 6 clincher. Chris Paul is still looking for his first ring and he made all 14 of his shots in New Orleans in Game 6. The Suns are still a strong favorite to get back to the Finals.

Western Semis: No. 2 Memphis Grizzlies vs. No. 3 Golden State Warriors

Memphis was 3-1 against the Warriors this season. It was a tale of two seasons as the Grizzlies were 20-5 without Ja Morant while the Warriors were 8-10 without Steph Curry. Both star point guards are back for the playoffs, and both teams have a top six defense.

It should be an exciting clash of styles as the Warriors love to shoot the three with their outstanding trio of guards while the Grizzlies score in the paint more than anyone with Morant driving to the basket.

Below is a list of sportsbooks where you can find the best odds for betting on the NBA playoffs. Remember to always check back for our NBA daily expert picks. For daily NBA parlay picks, see here.