The Miami Heat will look to make it 2-0 when they host the injury-riddled Philadelphia 76ers for Game 2 of the Eastern Conference Semifinals. Can James Harden lead his team to a win on the road? Let’s find out! Joel Embiid’s absence was a massive blow for Doc Rivers’ team, as they were forced to start veteran big man DeAndre Jordan to try and contain Bam Adebayo. The outcome was somewhat predictable, as Adebayo dominated with 24 points and 12 rebounds en route to a 14-point win.

Tobias Harris had one of his best games since joining the Sixers, leading all scorers with 27 points to go along with 6 rebounds and one three-pointer. James Harden, however, left a lot to be desired with just 16 points, 9 rebounds, and 5 assists.

Things could get ugly pretty quickly for the Sixers if Rivers refuses to make an adjustment with Embiid still nursing an injury for Game 2. The Heat play stout, physical defense and can swarm Harden on the perimeter and force him to make mistakes. 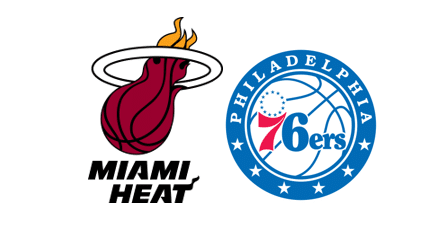 Once again, oddsmakers are making the Miami Heat 8.5-point favorites at home. This doesn’t come as a surprise as they beat the Philadelphia 76ers by nearly twice that margin in the first game of the series. Moreover, they’ve set the game total at 208 points, also unsurprisingly given the fact that neither of these teams is known for its powerful offense.

Now, the moment we’re here for. Here are our top picks for Heat vs Sixers Game 2. Moreover, if you want to get an expert’s insight about all games of the NBA Playoffs, don’t forget to take a look at our NBA Picks and Daily NBA Parlays sections for more predictions and picks!

Doc Rivers isn’t exactly known for making adjustments on the fly and his stubbornness has come to bite him more often than not. He’s already stated that he’ll continue to roll with DeAndre Jordan at the five regardless of how poorly he’s played all year.

But even so, we expect Rivers to try and keep this game close for the full 48 minutes, turning to Paul Reed often and leaving Jordan as the starter just for record-keeping purposes. Still, the Heat should win this game and jump to a 2-0 lead sans Embiid, but we don’t think that’ll be a blowout. If you want to watch it and see if we were right, check out our Heat vs Sixers Game 2 streaming article.

Heat And Sixers Play An Old-School Game, Go Under The 208 Points Total @-110 (Odds via DraftKings)

As we already mentioned, neither of these teams features an explosive offense. The Heat take pride in their defense and other than Duncan Robinson and Tyler Herro, they don’t feature many three-point shooters with Kyle Lowry out with a hamstring injury.

These teams ranked 28th and 25th in pace and they’ve fallen under the total in five of their past six meetings. The Sixers need to make up for Embiid’s offensive production and that’ll be easier said than done against such a physical defensive unit.

James Harden has been a shell of himself for most of the season but he’s still James Harden. Once considered the most unstoppable scorer in the league, Harden will need to take his production up a notch if the Sixers want to stand a chance here. We expect him to be more aggressive than he was in Game 1, even if that means forcing things and chugging multiple shots. He’s an expert in foul-baiting and getting to the line, so we expect a throwback performance from him on Wednesday.