Will the Los Angeles Rams win the Super Bowl? An Overview

The 2022 Super Bowl is just a couple of days away. And naturally, punters want to know which way this will swing. So on that note, we’d like to start with a compelling yes to the question raised above. This will actually be the fifth showing in terms of Rams Super Bowl appearances, with their last appearance in 2018. They hold a 1-3 record when it comes to Super Bowl games, which displays an answer to another common question. When did the Rams win the Super Bowl? Well, they won it in 1999, meaning that it’s been more than 20 years since the Rams tasted Super Bowl glory.

This Sunday, the Rams will be looking to replicate their success of 1999. And when you look at the Rams odds to win Super Bowl 2022, they are the clear favorites. Many sportsbooks have them down at around the -200 mark, which shows a clear advantage. And if you’d like to learn more about these odds and what they really mean, along with some history on the LA Rams Super Bowl wins, keep reading!

Let’s kick things off by talking about the Rams odds to win Super Bowl 2022. As mentioned above, many sportsbooks have them as overwhelming favorites, with -200 odds in many instances. Of course, the number of Rams Super Bowl appearances is more than the Bengals, and they have the one title sitting in their cabinet. So this gives them the edge in terms of experience and Super Bowl history. Sure, the Rams last Super Bowl win came more than 20 years ago, but it’s a promising indicator nonetheless.

The Rams also have a clear spread market that shows them as heavy favorites. Many leading bookmakers such as FanDuel and DraftKings are offering a minimum spread of -4.0 or -4.5. This means that this is a spread that they expect the Rams to win by, although you don’t have to back this market, of course. After giving you our predictions for the Super Bowl this Sunday, now let’s address another purpose behind this quick read. You may want to learn a bit more regarding the Rams last Super Bowl win and the teams’ history, so here we are:

When did the Rams win the Super Bowl?

As touched upon earlier, the Rams last won the Super Bowl in 1999. Interestingly, this was so long ago that the team was named the ‘St. Louis Rams’ back then. Of course, today they are known as the Los Angeles Rams. And perhaps more interestingly, if you had asked the question of when did the Rams win the Super Bowl prior to the current era, they’d have two additional trophies to speak of. Before the Super Bowl became the professional finals that we know today, the Rams actually managed to win the trophy twice in 1945 and 1951.

These are not recognized as Super Bowl wins, however, as the finals didn’t have the professional endorsements back then.

Focusing on the present now, the LA Rams have enjoyed four Super Bowl appearances. As you may recall, the Rams made it to the Super Bowl game in 2018, before losing to the Patriots in a rather low-scoring game. However, given that the Rams have made it to the Super Bowl game a total of five times now, we have to take this into account. Since the 2018 defeat, the Rams have made some significant adjustments in their squad. And for this season, things certainly seem to be paying off.

The final point we’d like to address is the form of the LA Rams this year. They have enjoyed a 12-5 record compared with a 10-7 record for the Bengals. And during the playoffs, the Rams have needed to beat some stiff competition. They have beaten the Buccaneers and 49ers en-route to the Super Bowl, both in impressive fashion, we might add! Then when we come back to the players, guys like Odell Beckham Jr, Matthew Strafford, and Cooper Kupp have been in awesome form. Assuming these guys all remain fit on the field on Sunday, they will cause havoc with the Bengal’s defense. 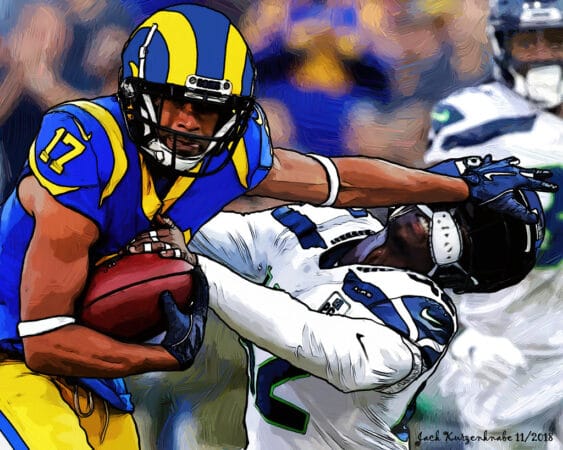 Will the Rams odds to win Super Bowl 2022 change between now and Sunday?

Most likely, yes. The odds that we have mentioned, while current at the time of writing, could well shift as the game approaches. For that reason, we suggest checking in with the mentioned sportsbooks for the latest odds before betting.

Where and when is the game scheduled for Sunday?

The game between the Rams and the Bengals is set for a 6:30 pm kick-off on Sunday. It will be held at the home stadium of the Rams, in Los Angeles. Of course, unless you are planning on attending the game, you’ll be pleased to know that there are many online sources where you can view the 2022 Super Bowl.

Can I bet on the Rams using bonuses for the Super Bowl game?

Sure. If you register with a new bookmaker ahead of the 2022 Super Bowl, you can usually redeem a sign-up bonus. This can then be used to wager on the Rams if desired.