Check out the top Lions vs Packers prediction and match preview that we have compiled below. See the Packers odds to make the playoffs as well as the Lions odds to win the game and make their way to the postseason.

Lions vs Packers prediction, preview and match odds for this week 18 game

Both the Packers and the Lions scored 41 points in their last games. Green Bay completely demolished the Minnesota Vikings by a score of 41-17 while coach Campbell’s boys beat the Chicago Bears 41-10.

These two victories were crucial for the playoff chances of the teams, and this week comes the moment of truth. Green Bay (8-8) and Detroit (8-8) will face off in a game that NBC decided to flex to the prime-time slot. It’s basically a playoff game where the winner will make the Wild Card round of the postseason.

Well…not exactly. The Seattle Seahawks are also in the mix with their 16:25 game versus the Rams. If Seattle wins this game, the Detroit Lions will be knocked out of playoff contention. If Seattle loses, then the winner of the GB vs DET match will get the much-coveted 7th seed in the NFC.

The Packers are on a roll, and this is visible in many aspects. The Green Bay Packers odds to make the playoffs are currently -200 and this also corresponds to the Money Line odds in their game against the Lions.

When it comes to their form, The Pack is on a 4-game winning streak. This is also 4-0 ATS. Their last loss came in week 12 against the Eagles where Green Bay actually put up a fight and lost 40-33. We should have taken their improvements more seriously. Week 14 was their bye week, and it seems the team took that time to gel. Over the last three games, the Packers defense has not allowed more than 20 points in a game.

What can we say about the Detroit Lions’ recent performances

The Lions score points – that’s what we can say right off the gate. Detroit has not scored less than 20 points since week 9 when they actually beat the Green Bay packers 15-9. Since week 9, the Lions have also covered the spread eight times and have failed just once. This Lions ATS stat of 8-1 is quite impressive but it doesn’t mean they will win the game and go to the playoffs.

The defense allows a lot of points and Detroit often finds itself in shootouts. Quarterback Jared Goff is among the leaders in passing yards in the NFL this season with 4,214. He currently ranks sixth in that category. 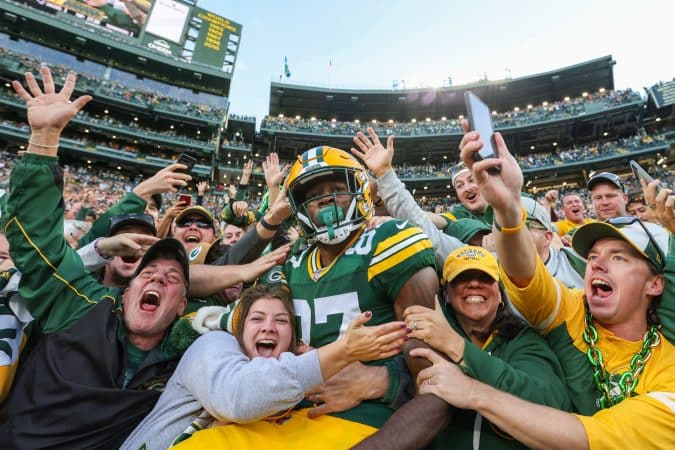 Important players to watch in the Lions at Packers 2023 game

Here are the difference-makers according to our team of experts. These players’ performance may well determine the outcome of this game. Our Lions vs Packers prediction is built on their performance.

Jared Goff: This one is pretty simple. Goff has to prove he can win at Lambeau in January. Historically, he has struggled there both with the Rams and the Lions. This is the time he has to have a mistake-free game and to put the ball in the right spots.

Allen Lazard: Lazard has had only one game over 100 yards receiving this season. The targets are there as he averages 5.3 targets per game. However, Christian Watson overshadows him a bit and this is the game in which Lazard will have to step up. The receiver now has 4 years of experience playing with Aaron Rodgers and this is the time to peak.

There will be plenty of opportunities to bet on both Jared Goff and Allen Lazard’s stats in this game. If you are looking for more predictions on player props, see our dedicated article.

See our top Lions vs Packers picks for the game this Sunday at Lambeau Field. If you want to see our best NFL picks today, visit our page.

Coach Dan Campbell says the outcome of the Seattle vs Los Angeles game will not have any impact on the way his team ill play against the Packers. With or without any playoff chances we expect the Lions to play hard giving it all. The problem for Detroit comes from the much improved Green Bay rushing attack. The Detroit Lions odds to stop the run agasint the Packers aren’t good. The team is currently ranked 29th in ruhing defense allowing 149.3 yards on the ground per game. Green Bay after starting the season poorly when it comes to running the ball, have improved a lot. They are now the 13th ranked team in the league with 125.6 rushing yards per game.

Another sign that tells us the Packers will run it hard is the fact that in none of their last four games Aaron Rodgers has thrown for more than one touchdown. The team has become more disciplined and it looks like this is the recipe for success against a Dan Campbell-led franchises.

So now that we know Detroit will allow rushing yards, let’s see what will happen through the air. The Lions are the 5th team when it comes to scoring offense in the NFL. They score 27.1 points per game. The Packers defense allows 21.9 per game so it’s safe to assume that the Lions will go over 20 points in this one.

If you assume that pointes per game is a deceiving stat, when it comes to yards per game, the Lions stats are even better – 383.6 ypg and the 4th rank in the league. Green Bay is again somewhat in the middle allowing 337.4 yards per game.

This is the type of game where motivation is not going to be an issue and since it’s virtually a playoff match between two division opponents, we see it as something that will be decided by a field goal. Take the points!

First quarter over 9.5 total points in the Lions vs Packers 2023 matchup

Also, the Detroit Lions are very often in their opponents red zone in first quarters of games. So far, Detroit has run 21% of all their red zone plays in the first quarter. This is a fifth of their overall red zone presence.

We also expect both teams to come out with scripted plays to begin the game. This increases the chances of us seeing an opening drive touchdown by either side. There will be at least 10 points scored in the first quarter of the match.

FAQ about the Lions vs Packers predicion and matchup

It will be played at Lambeau Field, Green Bay as the Packers are the home team in this one.

The Lions are currently priced at +825 to make the postseason

We recommend betting at BetMGM and Caesars as these sportsbooks are among the leaders in the USA.