The New York Jets (7-5) can shock the NFL world again by completing a sweep of the Buffalo Bills (9-3), who are back on top of the standings in the AFC East, the AFC, and the Super Bowl odds.

But the Bills are going to have to get through this season without Von Miller, who was thought to be the final piece to a Super Bowl puzzle. The future Hall of Fame edge rusher tore his ACL on Thanksgiving and his season is over. The Bills should still have enough defense to deal with the Jets, but that loss could really show up against a tougher opponent deep in the playoffs.

One month ago, the Bills blew a 14-3 lead to the Jets in a game where Josh Allen threw two bad interceptions and injured his elbow on the final drive. Since then, the Bills have tried to get more out of their running game with the backs, and it is working as rookie James Cook looks good. Allen can still find Stefon Diggs with the best of throws, but some of the other receivers like Gabe Davis and tight end Dawson Knox have not been as involved. At least slot receiver Isaiah McKenzie has showed up big the last few games.

The Jets leaned on the run last time, but now they are going with a pass-happy attack with Mike White replacing Zach Wilson at quarterback. White is the better option, but he will have to make up for a game last year against Buffalo where he threw four interceptions. The scoring margin had a lot to do with that as the Jets trailed by three touchdowns in the third quarter, but he has to protect the ball better in this matchup if the Jets are going to have a chance at another upset.

Players to watch in the Jets vs. Bills game

Garrett Wilson: With White throwing the ball, Wilson might be a dark horse for Offensive Rookie of the Year. He had eight catches for 162 yards in Minnesota last week and was pivotal in the win over Buffalo with eight catches for 92 yards. He already looks like a legit No. 1 wide receiver as a rookie, but he could be seeing a better corner this week with Tre’Davious White back in action for the Bills.

James Cook: Since 2020, the Bills notoriously do not use their backs that much when it comes to carries. Josh Allen loves to run the ball himself, but Devin Singletary has looked good this year, and so has rookie James Cook (Dalvin’s brother) in the last few weeks. He had 86 yards against the Browns and 64 yards against the Patriots, his two best games of the season. The Jets have been a little vulnerable to the run the last few weeks, so maybe this is another game where the Bills lean on the run more down the stretch. 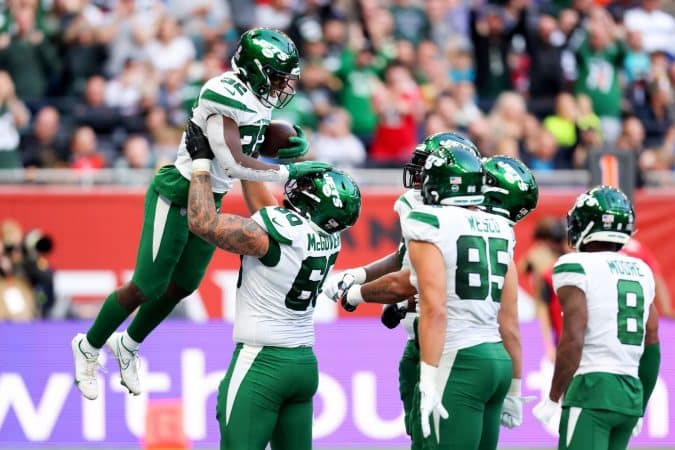 Our Best NFL Bets for the Jets vs. Bills game

We have two NFL Week 14 predictions for this big rematch in the AFC East.

The Jets vs. Bills spread opened with the Bills as a 9.5-point home favorite and it has been holding steady at that mark.

The Bills should win this game, but there is something enticing about Mike White at quarterback. Even after trailing 20-3 and 27-15 last week in Minnesota, he was 1 yard away from taking the lead in the final minutes of that game. Braxton Berrios dropped his fourth-down pass from the 1-yard line.

White makes some mistakes, but he has enough arm talent and awareness of the defense to move the ball down the field quickly. The Jets also seem to have extreme trust in him as he has thrown for over 300 yards in three of his first five starts.

So, even if the Bills get ahead by a good margin, you feel confident that White can get at least a backdoor cover. The Jets have not lost by double digits since Week 3 when they lost 27-12 in Cincinnati with Joe Flacco still at quarterback.

But the Bills are playing better since the shocking Minnesota loss with four turnovers and that brutal fumble by Allen on the quarterback sneak. The Bills have won three in a row with only two giveaways. They are still scoring 24-to-31 points every week since Allen’s elbow injury, so that looks to be a non-issue at this point.

Losing Miller absolutely stinks for this team, but the Jets are not the kind of offense that should light this defense up. But we do think their newfound ability to throw a lot will help them stay within single digits to get a cover and maybe make this one interesting for your NFL bet of the week.

You should bookmark our NFL picks page for more betting tips.

Are you not entertained by the Jets having a prolific quarterback? White has started five games for the Jets, and he has passed for 405, 95 (injured), 251 (Buffalo), 315, and 369 yards in those games.

Here are the main reasons to like White to hit this over number again:

The Jets are going to throw it around more in this game with White, so he should be a safe bet for another 250-yard game.

Frequently asked questions about the Jets vs. Bills game in Week 14

The game is being played at Highmark Stadium in Buffalo, New York.