The Philadelphia Eagles (11-1) continue rolling after a 35-10 dismantling of the Titans that led to Tennessee firing its general manager. Now we’ll get our first look at how the Eagles handle the New York Giants (7-4-1), who have not won a game since Week 10 and are coming off a disappointing 20-20 tie with the Commanders.

But division games can be wild. Just look at the Eagles losing at home to Washington. Last year, the Giants forced Jalen Hurts into the worst game of his pro career with three interceptions in a 13-7 loss. Daniel Jones has won his last two games against the Eagles, and the Giants often keep it close with them.

But Hurts is a better quarterback than he was one year ago. In fact, he is very close to Patrick Mahomes in the MVP odds after throwing for a season-high 380 yards last week. The Eagles are the third offense in NFL history to have consecutive games with at least 350 yards rushing one week and 350 yards passing the other week. They are very balanced and capable of doing both things well.

The Giants are 0-4 when allowing more than 22 points this season and 7-0-1 when allowing less than that. They are going to need one of their best defensive efforts of the season to slow down Hurts.

The NFL Week 14 odds have the Eagles as a 7-point road favorite with a total of 44.5 points.

Players to watch in the Eagles vs. Giants game

Miles Sanders: The Eagles are doing a good job of playing the matchups each week. They ran wild on the Packers and conceded the run against an elite run defense like the Titans. That’s how Miles Sanders went from 143 yards to 24 yards the last two weeks. The Giants are not good against the run, so this could be a Sanders week again. He averages 5.29 yards per carry against the Giants but has not scored a touchdown in five career meetings.

Saquon Barkley: Can the Giants get their lead back on track again? He was held to 72 yards on 28 carries in two meetings with Philadelphia last season. Barkley is averaging 4.36 yards per carry this season but only 3.98 since Week 2 and 2.82 over his last three games. He has been a solid touchdown scorer with scores in 8-of-12 games, but the Giants could use more yards this week to keep drives going. 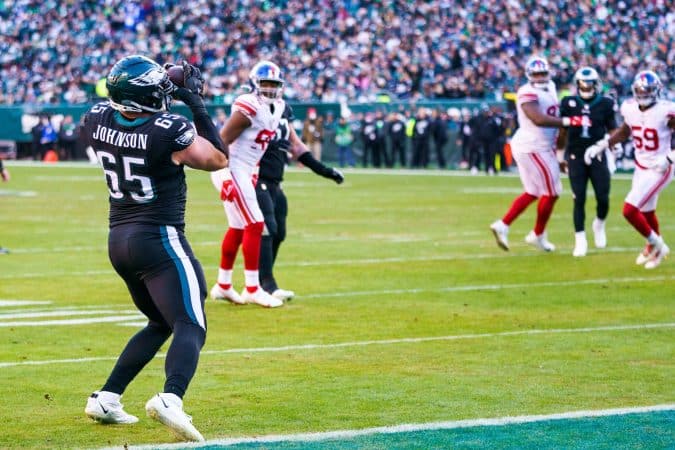 Our Best NFL Bets for the Eagles vs. Giants game

We have two NFL Week 14 predictions for the first game in this NFC East rivalry this season.

The Eagles vs. Giants spread opened with the Eagles as a 5.5-point road favorite. It has since moved up to a full touchdown going into the weekend.

Philadelphia has become an unpredictable team after an 8-0 start where the Eagles routinely jumped out to big leads before halftime and coasted to a win. But ever since the upset loss to Washington, we have seen the Eagles slum it in Indy in a 17-16 comeback against the Colts, drop 40 points and 500 yards on the Packers in a wild 40-33 game, and destroy the usually competitive Titans 35-10 in an aerial assault.

Those are three very different outcomes from low-scoring comeback to shootout to rout.

The Giants have also lost their way a bit after being the team that routinely came back to win in the fourth quarter while keeping the score down. But after losing by two touchdowns in Seattle, we have seen the Giants down two touchdowns late in Detroit (31-18) and Dallas (28-20 backdoor cover), and last week they blew a late 20-13 lead to Washington before settling for a tie in a game they should have won.

Some of the luster of the defense has gone away after facing better competition lately. Hurts is unlikely to throw three picks at MetLife like he did last year as he has three picks in 12 games this season. But the Giants are the only defense blitzing over 40% of the time this year and they have the fewest missed tackles (34) according to Pro Football Reference.

It’s in the details this week. In the three games the Giants have lost by more than seven points, they had seven or eight dropped passes, their three worst games of the season hanging onto the ball. Maybe last week’s tie will serve as a wake-up call that the playoffs could be slipping away if the Giants don’t start playing better.

With Philadelphia’s tendency to ease up in the fourth quarter, a backdoor cover is always a possibility again. Given the way Hurts played in his last road game against the Giants, and the overall randomness that comes with division games, we’ll give the Giants the benefit of the doubt and take them with the points for your NFL bet of the week. But the Eagles are the better team and should win this game.

In the Carson Wentz era, the Giants felt like the only team he could come back on in the fourth quarter. It felt that way because it was practically true. Wentz had 10 game-winning drives with the Eagles and half of them were against the Giants.

Wentz last got them in 2020 in the game where Daniel Jones fell flat on his face on an 80-yard run as some of Jones’ more memorable games have been against the Eagles too.

In recent weeks, we have seen the Giants score multiple fourth-quarter touchdowns in comeback attempts against the Lions and Cowboys. We have also seen the Eagles have to come back in Indianapolis and hold off Jordan Love when he came into the game for an injured Aaron Rodgers.

With the line set to 12.5 points, it seems more than plausible that each team can score a touchdown in the final frame to his this over. Either another Philadelphia comeback against the Giants or another rally attempt by the Giants would do the trick.

Frequently asked questions about the Eagles vs. Giants game in Week 14