The Eagles will travel to Arlington to take on their rivals the Cowboys on Saturday. Kickoff is scheduled for 4:25 p.m. ET and the bout can be seen on FOX.

This matchup would’ve had a lot more meaning to it had Dallas not fallen in overtime to Jacksonville last week. Instead, at 10-4, it’s too difficult to catch the No. 1 seeded Eagles at 13-1 with just three games remaining.

Nick Sirianni has his men on a five-game winning streak. Philadelphia would have to lose all three of its remaining games and Dallas would need to finish the season 3-0 in order to catch up and win the NFC East.

MVP frontrunner, Jalen Hurts, will miss the contest due to a shoulder injury. Stepping into his place is backup Gardner Minshew.

The Eagles come into the game after narrowly edging out the Bears, 25-20 at Soldier Field last Sunday. Dallas enters the game with a 40-34 loss to the Jaguars that ended in overtime with a pick-six for Doug Pederson’s team.

Oddsmakers at DraftKings Sportsbook give the Cowboys a 4.5-point edge over the Eagles. On the moneyline, Dallas is -205 and Philadelphia sits at +175.

Bettors have put 72% of their bets on the Eagles to cover and 95% of the money on them to win outright. The game total is set at 46.5 points.

Players to watch in the Eagles vs. Cowboys contest

A.J. Brown: The Pro Bowl wide receiver has enjoyed a successful first year with the Eagles. Brown has recorded 74 receptions for 1,201 yards (fifth) and 10 touchdowns. The Ole Miss product is also averaging 16.2 yards per reception (fourth).

CeeDee Lamb: The former Oklahoma star has transitioned well into the WR1 spot left open by Amari Cooper. Lamb has 81 catches for 1,087 yards and six touchdowns. He’s developed a connection with Dak Prescott in their third year together on the Cowboys. 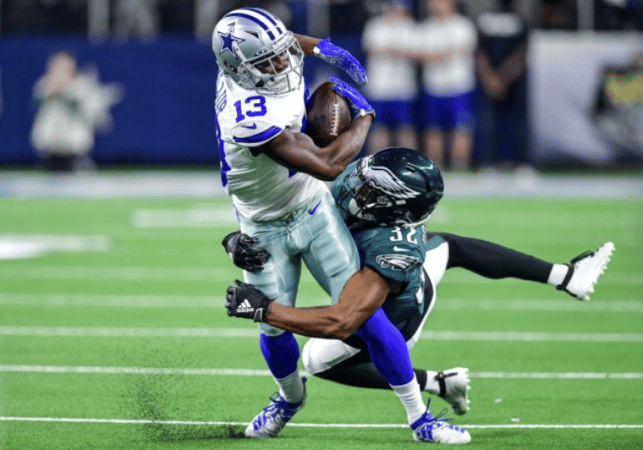 Our NFL bet of the week for the Eagles vs. Cowboys

The Eagles losing Jalen Hurts for this game gives Dallas and its elite defense a huge advantage.

Hurts’ dual-threat ability opens up the passing game and doesn’t let teams commit to stopping just one aspect of the offense. Minshew is a lot less mobile than Hurts and also less talented as a thrower so Dan Quinn’s pass rush should be able to feast.

Dallas’ dynamic duo at running back has posed problems for opponents for most of the year. Tony Pollard leads the team in rushing with 969 yards and has scored 12 total touchdowns. His 5.5 yards per carry average is fifth-best in the league.

Ezekiel Elliot has recorded just 11 more carries than Pollard for the season and has tallied up 774 yards and 10 rushing touchdowns (7th). His 4.1-yard-per-carry average is 30th in the league.

Both the Eagles and Cowboys are 8-6 against the spread this season. Dallas is 5-1 ATS when playing at home in its last six matchups against Philadelphia. The Eagles are 3-7 ATS in their last 10 vs. Dallas.

At ESTNN, we believe Dallas will take advantage of Hurts being injured and cover an alternate 3-point spread. DraftKings is offering -154 odds for the selection.

The former No. 4 overall pick has found the end zone at least once in his previous seven contests. Elliott has scored 10 rushing touchdowns in just 12 games.

He’s found the end zone in 83% of games he’s played and is the primary red zone back. Elliott has taken up 58.3% of the red zone attempts for Dallas. The Ohio State product has 32 rushes and two receptions inside the 20-yard line.

Our advice is to wager Elliott will score against the Eagles on FanDuel Sportsbook at -110 odds.

Frequently asked questions regarding Philadelphia vs. Dallas in Week 16

Dallas is 69-54 against the Eagles all-time.