This game could be a lot of fun as the Philadelphia Eagles (8-1) look to rebound from their first loss on a short week. The Indianapolis Colts (4-5-1) want to build on their first win in the Jeff Saturday era after the interim coach some called a travesty hiring already picked up his first win against the Raiders.

We get to see how the Eagles respond to some adversity with tight end Dallas Goedert (shoulder) injured and the team coming off its worst performance of the season. The Eagles allowed way too many third-down conversions to Washington, and obviously exceeding their season total in giveaways (from three to seven) is a big problem. At least they were fluky plays that should not be a problem going forward. One should have been negated by a face mask penalty that was missed entirely by the officials.

As for the Colts, let’s see how they stack up to what many feel is still the best team in the NFC. Is Saturday a hidden gem, or did he just get fortunate to play the Raiders with Matt Ryan and Jonathan Taylor at their healthiest in quite some time? Either way, this team was going nowhere with Sam Ehlinger at quarterback, so it is nice to see sanity restored in Indy with Ryan back at quarterback.

Ryan has already led the Colts to five fourth-quarter comebacks (four wins and a tie) this year, including one over the elite Chiefs. It would be such an Indy thing to beat the Chiefs and Eagles in a non-playoff season, but a chance to do something is still there this season.

The NFL Week 11 odds have the Eagles s a 7-point road favorite with a total of 45.5 points. Can Saturday shock the NFL world and send the Eagles on a losing streak?

Players to watch in the Eagles vs. Colts game

A.J. Brown: Did an early injury cause Brown to have just one catch for 7 yards on Monday night, or was the offense just having a bad night? We’ll see. Brown has had 98 and 155 yards with a touchdown in each of his last two trips to the Colts as a member of the Titans. He is always a threat to have a big game and should be looking for one here against a defense he knows well.

Michael Pittman Jr.: Washington’s Terry McLaurin is the only receiver to break 80 yards against the Eagles this year, and he did it twice with 100-yard games. We need to see Pittman use his size and aggressively attack the ball if the Colts are going to do anything outside the numbers when throwing against these stellar cornerbacks. 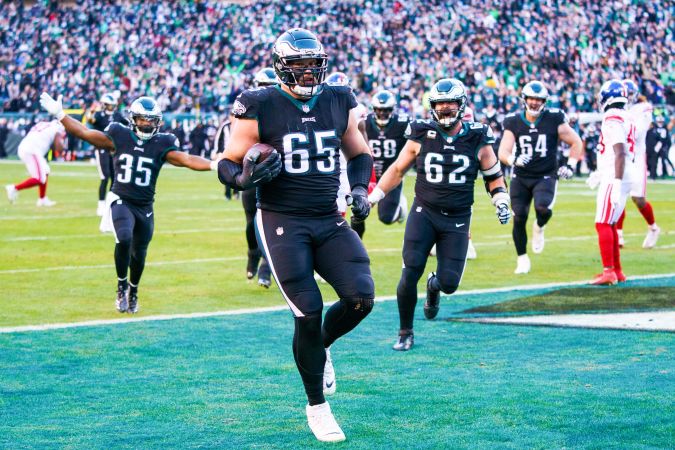 Our Best NFL Bets for the Eagles vs. Colts game

We have two NFL Week 11 predictions for this matchup that was supposed to be a reunion of Frank Reich and former assistant coach Nick Sirianni, but when you bench Ryan for Sam Ehlinger, you end up unemployed in this league.

The Eagles vs. Colts spread opened with the Eagles as a 10-point road favorite, but that was a little extreme and the line has moved down to Eagles -7.

This spread likely comes down to how the Eagles’ defensive front plays against the Colts’ offensive line. The Colts were good at protecting Matt Ryan last week, though the Raiders have a poor pass rush. Ryan also has won multiple games this year after taking five or six sacks, so it really comes down to if the Eagles can turn those pressures into fumbles and interceptions. After getting benched for making those mistakes, maybe Ryan will do better to avoid them.

The other potential issue is the run defense. The Eagles have allowed their last five opponents to rush for at least 120 yards and the last three have gone over 140 yards. This shouldn’t be so tied into rookie Jordan Davis’ availability as he was on the field for three of the last five games, but either way, he is out this week again. The team just added veteran Ndamukong Suh, but who knows how much he could contribute in a pinch on Sunday if he even plays.

But if the Colts are getting Jonathan Taylor rolling like he did last week with 147 yards and a touchdown, his first 100-yard game since Week 1, then the Colts should have a balanced attack that could score around 20 points in this one. The Eagles almost always settle in the 20-to-29 point range this season, so you can see the spread well within reach.

But there is also the great potential for a backdoor cover with the way the Eagles run it up early and try to coast late. Meanwhile, the Colts have those fourth-quarter rallies to fall back on with Ryan. The Colts already beat the Chiefs, so anything is possible. They likely won’t beat the Eagles too, but I like the cover here.

Be sure to check out our NFL picks page for more betting tips.

The Colts have been trying to make wide receiver Parris Campbell happen for four seasons after drafting him in the second round in 2019. Only on Sunday against the Raiders did Campbell finally have his shining moment with a career-high 76 yards and a game-winning touchdown in the fourth quarter.

Campbell is now up to 373 yards on the season, more than he had in his first three years combined (360 yards). He is also second on the team with 39 catches, so he is the de facto No. 2 receiver even if rookie Alec Pierce has shown quicker potential.

Campbell has gone over 36.5 yards in 6-of-10 games this year, though we know the Colts are more likely to throw it with Ryan at quarterback than Sam Ehlinger. Campbell still had 43 yards in the game against Washington with Ehlinger at quarterback.

This is also just an opponent-based value pick as the Eagles put slot corner Avonte Maddox on injured reserve. He will not play in this game, so Campbell could have an easier matchup as the Colts should want to avoid a lot of the throws outside the numbers with those tough outside corners (Darius Slay and James Bradberry) challenging things down the field. Stick to the quicker, shorter throws in the slot to Campbell and he should have no problem hitting his over in yards for your NFL bet of the week.

Frequently asked questions about the Eagles vs. Colts game in Week 11

The game is being played at Lucas Oil Stadium in Indianapolis, Indiana.

The 2022 Eagles are the ninth team since 1940 to start at least 8-0 and lose their first game to a team that had a losing record at the time. The last team to do so, the 2020 Steelers, also lost to Washington and then lost their next game to a losing team (Bengals were 2-10-1) as well.

You should bookmark our player prop picks and daily NFL predictions.