The Miami Dolphins will travel to Sofi Stadium to take on the Los Angeles Chargers for Sunday Night Football. The primetime battle is slated for 8:20 p.m. ET and NBC will broadcast the event.

The Dolphins and Chargers are both in similar situations with the playoffs in sight. Miami is currently the No. 6 seed in the AFC playoff picture and (8-4) trails division leaders and the AFC’s No. 1 overall seed, Buffalo, by a game.

Mike McDaniels and his South Florida squad won five-straight games before faltering last week, 33-17, to the 49ers. Brandon Staley and his men have lost three of the last four and are coming off a 27-20 loss to the Raiders.

The Chargers appeared to have a chance after cutting Las Vegas’ lead to 27-20 with 8:34 remaining in the fourth quarter but were unable to muster up any more offense which resulted in the loss.

Miami cut into San Francisco’s lead, 23-17, early in the fourth quarter but was outscored 10-0 for the rest of the contest.

The current moneyline odds on DraftKings Sportsbook are Miami (-180) vs. Los Angeles (+155). Oddsmakers favor the Dolphins as 3.5-point favorites at +100 odds. Among the public, 58% of spread bets have been placed on Miami to cover and 67% of the money is on Los Angeles to win outright.

Players to watch in the Dolphins vs. Chargers contest

Jaylen Waddle: The second-year pro can surpass 1,000 yards receiving with just 32 yards against the Chargers. Waddle is fifth in the NFL in receiving yards and has broken the plane six times this season. He’ll look to bounce back from a season low, nine yards in the loss to San Francisco.

Keenan Allen: Los Angeles’ No. 1 receiver has missed most of the season with a lingering hamstring issue. Allen returned on November 20 and is slowly returning to his old self. The Pro Bowl wideout has posted at least 88 yards in two of his last three games and has reached the end zone twice during that span. 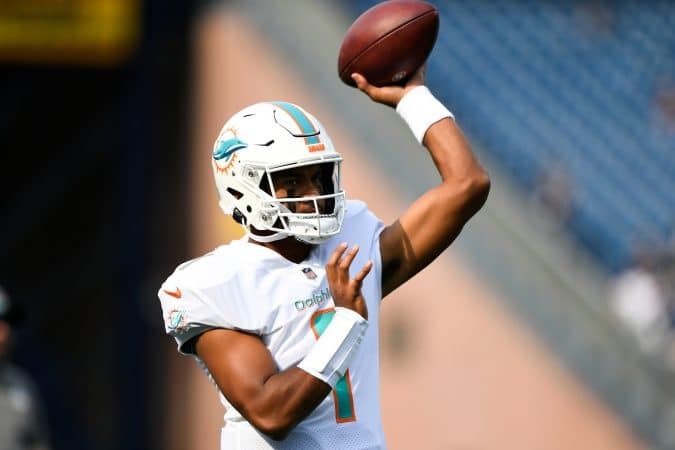 Our NFL bet of the week for the Dolphins vs. Chargers

Justin Herbert and the Chargers will be in full desperation mode come Sunday to try and regain an above .500 record. Herbert and his head coach have never reached the postseason together but were one game away last season.

Los Angeles has had trouble closing out contests but manages to consistently put on good performances and keep things close. Seven of the last eight contests involving LA have been decided by one score or less.

His counterpart, Tua Tagovailoa is enjoying a breakout season. The Alabama product is 12-1 to win the Heisman behind Patrick Mahomes, Jalen Hurts, Joe Burrow and Josh Allen.

Miami’s five-game win streak came against weaker opponents including Pittsburgh, Detroit, Chicago, Cleveland and Houston. All five teams have losing records. Before the streak, they lost three in a row to teams with winning records.

The Chargers are 7-5 against the spread this season and 4-2 ATS when playing at home. The Dolphins are 6-6 ATS and 3-6 ATS in their previous nine contests.

Since Miami is 3-4 versus teams with .500 records or better, we believe at ESTNN this game will come down to a score or less. DraftKings is offering -147 odds for the Chargers to cover an alternate 5-point spread.

Many analysts predicted Tyreek Hill would have a decline this year due to the downgrade from Mahomes to Tagovailoa. The opposite scenario has occurred and the electric speedster leads the NFL in receiving yards (1,379).

The Chargers are 19th in the NFL against the pass, surrendering 220.1 passing yards per game, which gives Hill a great chance to once again surpass the 98.5 receiving yards prop.

Our pick is to take the over at -117 odds on Caesars Sportsbook. If you’re interested in learning about more prop bets for week 14, read our NFL player props page.

Frequently asked questions regarding Miami vs. Los Angeles in week 14

Miami has won the Super Bowl twice. The organization lifted back-to-back Lombardi Trophies in 1972 and 1973.