The Dolphins will travel to Buffalo to take on their division rivals, the Bills Sunday for the first round of the NFL playoffs. Kickoff is slated for 1 p.m. ET and the bout can be seen on CBS.

The No. 7 seed, Miami (9-8) managed to sneak into the playoffs with an 11-6 win over the New York Jets. The win ended a five-game losing streak and head coach Mike McDaniel successfully earned a postseason berth in his first year at the helm.

Buffalo (13-3) locked in the No. 2 seed with its 35-23 home win over New England. The victory also eliminated the Patriots from playoff contention and aided the Dolphins.

McDaniel and the Dolphins are in trouble at the quarterback position with Tua Tagovailoa still unable to pass concussion protocol. All signs point to rookie quarterback Skyler Thompson starting since backup Teddy Bridgewater is questionable for the contest with a knee and thumb injury.

Thompson has completed 60-of-105 pass attempts for 534 yards, one touchdown and three interceptions. The 25-year-old owns a poor quarterback rating of 27.3.

The two teams split the regular-season series 1-1. Miami won the first meeting 21-19 at home and Buffalo was victorious the second time 32-29.

Bookmakers at FanDuel Sportsbook give Buffalo a 13.5-point edge over Miami. On the moneyline, the Bills are -950 and Miami sits at +640.

The game total for the contest is set at 43.5 points. Bettors have put 74% of their wagers on Buffalo to cover the spread and 93% of the money on Sean McDermott’s team to win straight up.

Players to watch in the Dolphins vs. Bills contest

Tyreek Hill: The former Chief excelled in McDaniels’ system this season and found a connection with Tagovailoa. Hill finished the campaign with the second most receptions (119) and yards (1,710) in the NFL. The 28-year-old also recorded seven touchdowns.

Stefon Diggs: The Pro Bowl wide receiver finished this season in the top five for receptions, yards and touchdowns. Diggs recorded 108 catches (fourth) for 1,429 yards (fifth) and 11 touchdowns (T-3rd). The Maryland product averaged 89.3 yards per game this year and will attempt to expose Miami’s weak secondary. 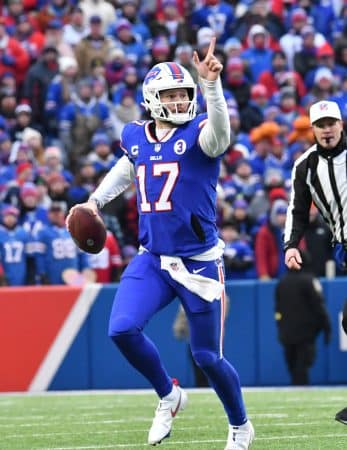 Our NFL bet of the week for the Dolphins vs. Bills

The Bills are one of the hottest teams in the league and have won seven games in a row. Josh Allen has played at an MVP-caliber level all year and is +475 to win the Super Bowl MVP. The 26-year-old trails just Patrick Mahomes at +400.

The dual-threat quarterback has also been impressive on the ground, rushing for 762 yards and seven touchdowns. Allen is averaging a whopping 6.1 yards per carry.

JOSH ALLEN TO STEFON DIGGS. WHAT A THROW.

Buffalo has been dominant in recent weeks and is defeating its opponents by an average of 11.8 points in its last five outings.

McDermott has built a well-oiled machine in New York that is balanced on both sides of the ball. Offensively, the Bills are ranked second in the league in points per game (28.4) and in total offense (397.6 yards per contest).

The Bills are only surrendering 17.9 points per game on defense (second) and boast the six-ranked total defense by allowing opponents an average of 319.1 yards per contest.

Miami has the sixth-ranked offense (364.5 YPG) but achieved a high ranking when Tagovailoa was healthy. It’ll be difficult to keep the game competitive with a rookie (seventh-round pick) under center.

At ESTNN, we believe it’s safer to take the Bills to cover an alternate 8.5-point spread. FanDuel Sportsbook is offering -186 odds for the selection.

The Wyoming product has thrown for at least two touchdowns in five of his last six games. On the season, Allen has hit the over 1.5-touchdown pass threshold 11 out of 16 times.

Miami’s secondary is vulnerable through the air (27th) and is allowing 234.8 passing yards per week. The unit is also giving up 1.6 touchdown passes per outing to opposing quarterbacks.

Our pick is to take Allen to toss more than 1.5 touchdown passes at -150 odds on DraftKings Sportsbook. If you’re interested in learning about more prop bets for round one of the playoffs, read our NFL player props page.

No, Buffalo has never hoisted the Lombardi Trophy. From 1990-1993, the Bills made four-straight appearances in the big game but failed to win.