The Miami Dolphins are 3-0 after posting perhaps the most shocking win of both Week 2 (at Baltimore) and Week 3 (Buffalo). The Dolphins erased a 35-14 deficit in the fourth quarter in Baltimore and came back in the heat to beat the Bills on Sunday despite being outgained by nearly 300 yards.

The Cincinnati Bengals finally played a game that wasn’t decided by a field goal to get in the win column with a 27-12 disposal of the Jets. Joe Burrow was only sacked twice and played his cleanest game of the season.

Despite the 3-0 record, the NFL Week 4 odds have the Dolphins as a 3.5-point road underdog in this matchup. This is not as uncommon as you think. Just last season, four 3-0 teams were underdogs in Week 4, and all but one (Arizona at Rams) lost their first game of the season.

Players to watch in the Dolphins vs. Bengals game

Jaylen Waddle: Tyreek Hill draws a lot of the storylines and attention from the defense, but Waddle may be the team’s most consistent threat each game this season. He has 25 more yards on one extra target than Hill, and he leads the team with three touchdowns. He is becoming a superstar in his second season.

Tee Higgins: With all the star receiver talent in this game, Higgins may go overlooked, but he is an incredibly talented player too. He had an outstanding catch in the end zone that was ruled incomplete despite his effort on Sunday against the Jets. He is dealing with a toe injury but if he plays, he is a player to focus on. 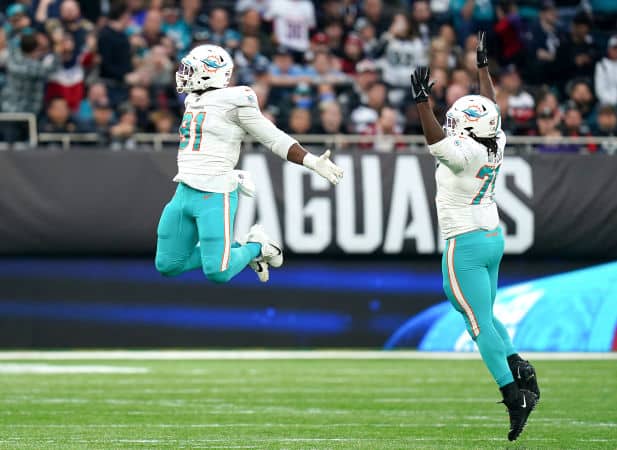 Our Best NFL Bets for the Dolphins vs. Bengals game

We have two NFL Week 4 predictions we are excited to share for this game as the Dolphins look to stay undefeated.

The Dolphins vs. Bengals spread opened with the Bengals as a 2-point home favorite, but with uncertainty about Tua Tagovailoa’s health, that line is moving to Bengals -3.5.

One of the strangest injury stories of the season happened in Miami on Sunday when Tagovailoa was shoved down at the end of a play. He clearly hit his head on the ground, then he was visibly wobbly and needed assistance getting off the field. Anyone who has spent a little time watching football saw this as a concussion, but to the shock of many, Tagovailoa soon returned and finished the game. Now the team is saying it’s a back injury and he is questionable for Thursday night.

Regardless of what happens here, the Dolphins would likely not fare as well with backup quarterback Teddy Bridgewater, who is too passive to make the speed of Tyreek Hill and Jaylen Waddle work.

But there are other reasons to like the Bengals on defense on this short week at home besides Tua’s health:

Maybe the best reason to like the Bengals is that Miami’s defense has been shredded by Lamar Jackson and Josh Allen the last two weeks, and Joe Burrow has the weapons around him to deal with a defense that has one takeaway in those games, and they have only six sacks on the season. If Burrow is kept upright, the Bengals should be able to win this game at home, so let’s go with the Bengals to cover for your first NFL bet of the week this Thursday.

Remember to keep up with our NFL picks page for more betting tips.

Another reason to like the Bengals to win and the under to hit is that the Dolphins just defended 90 Buffalo plays in Sunday’s heat, and now they have to go travel on a short week to play the Bengals. This offense has not been scoring a ton of points, but Cincinnati leads the NFL with 227 offensive plays. They can wear the Dolphins down in this one with Joe Mixon’s rushing and that great trio of receivers for Burrow to throw to.

Cincinnati’s defense has been playing backup-level quarterbacks, but it has only surrendered three touchdowns in three games, and all were inside the 10-yard line. This should be a hard game for the Dolphins to hit their big plays in:

Great receivers all over the field, but between the short week and health, this feels more like 24-20 than it does 38-35. Take the under.