The Cowboys will fly to the nation’s capital to take on their NFC East rivals, the Commanders Sunday. Kickoff is slated for 4:25 p.m. ET and the matchup can be seen on FOX.

A lot rides on this game for Dallas including a divisional title and potentially the No. 1 overall seed in the NFC.

America’s team (12-4) needs Philadelphia (13-3) to lose to New York and must win against Washington in order to win the NFC East crown for a second consecutive year. In order to gain the one seed in the NFC it’ll need Philadelphia to lose and San Francisco to fall against Arizona (unlikely).

Washington (7-8-1) has been eliminated from playoff contention after its embarrassing 24-10 loss to Cleveland. After the game, a reporter questioned head coach Ron Rivera who provided a rather shocking answer.

Ron Rivera had no idea that they could be eliminated from playoff contention tonight with a Packers win.pic.twitter.com/5eLov5Emxm

Dallas is coming off of an impressive 27-13 win over Tennessee on Thursday Night Football. The Cowboys have now won back-to-back contests.

Jerry Jones definitely has his sights set on a Super Bowl run after last year’s disappointing first-round elimination at the hands of San Francisco.

The current moneyline odds for this matchup on Caesars Sportsbook are Dallas (-320) vs. Washington (+250). Bookmakers favor the Cowboys as seven-point favorites at +100 odds.

The game total is set at 41 points. Among the public, 52% of spread bets have been placed on the Commanders to cover and 61% of the money is on the silver and blue to win straight up.

Players to watch in the Cowboys vs. Commanders contest

Tony Pollard: The 25-year-old is enjoying a career year and has recorded 186 rush attempts for 988 yards and 12 total touchdowns. Head coach Mike McCarthy will feed him once again and help him reach 1,000 rushing yards for the first time as a pro.

Terry McLaurin: The former Ohio State Buckeye is having a great season with 74 receptions for 1,117 yards and four touchdowns. McLaurin has now reached 1,000 receiving yards for his third year in a row. His 15.1 yards per catch average is ninth in the NFL in 2022-2023. 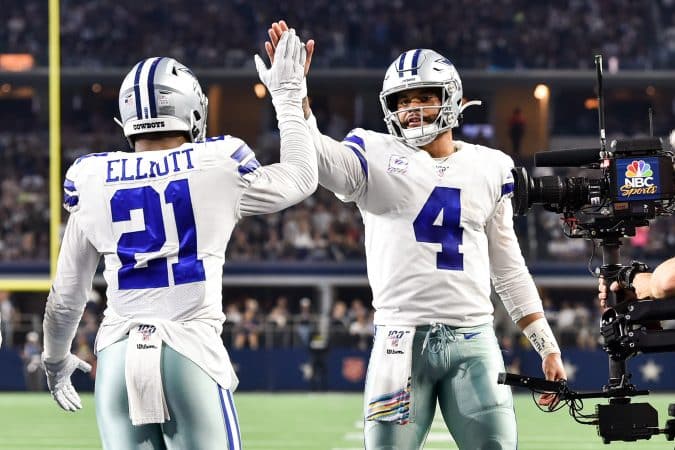 Our NFL bet of the week for the Cowboys vs. Commanders

Rivera has had a quarterback problem in Washington with Taylor Heinicke and Carson Wentz. The head coach made Heinicke the starter after Wentz missed time with an injury and kept him as the QB1 when Wentz became healthy again.

Heinicke went 5-3-1 as the team’s starter but suffered a draw and two defeats in his last three games. Rivera then decided put Wentz back in the driver’s seat, which many pundits and fans believe was a big mistake.

In a must-win game against the Browns which the team lost, Wentz struggled once again throwing 16-of-28 passes for 143 yards and three interceptions. The former No. 2 overall pick was also sacked three times. Wentz is now 2-5 as a starter this season.

Wentz and Heinicke’s stats below show Rivera might have made a mistake making the switch. The locker room reportedly supported Heinicke after he was initially made the starter.

The Cowboys don’t have a quarterback problem. Prescott might be throwing too many interceptions this season (14 which is T-31st in the NFL) but he’s managed to throw for 2,732 yards, 22 touchdowns and boasts a QBR of 63.2 (fifth in the league).

Dan Quinn’s defense spearheaded by linebacker Micah Parsons has also performed well this year. The unit ranks sixth in scoring defense (19.8 points surrendered per contest) and 13th in yards allowed (331.5). It has also registered the third most sacks (51) and averages two takeaways per game (first).

At ESTNN, we believe Carson Wentz will struggle as he usually does and that Dallas will cover an alternate 4-point spread. Caesars Sportsbook is offering -184 odds for the selection.

CeeDee Lamb has recorded at least 100 yards receiving in three straight contests. In those contests, he’s seen 32 targets and made 28 catches.

Ezekiel Elliott has scored a touchdown in nine-straight contests. The former No. 4 overall pick has scored 12 rushing touchdowns in just 14 games. The Ohio State product has 39 rushes and two receptions inside the 20-yard line.

Our pick is to parlay Lamb to have over 100 receiving yards and Elliott to score. The bet is available on DraftKings at +380 combined odds.

Frequently asked questions regarding Dallas vs. Washington in Week 18

Dallas selected Lamb with the 17th overall pick in the first round of the 2020 NFL Draft out of Oklahoma.