Under 45 Cowboys vs. Buccaneers

One of the most popular teams in the nation will give it another shot to go back to the ultimate stage when the Dallas Cowboys hit the road to take Tom Brady and the sluggish Tampa Bay Buccaneers for their 2022 playoff debut.

Todd Bowles’ team was far from the offensive juggernaut they had been during the first two years of the Brady era. In fact, they finished the season with a losing record, which is the only time in 23 years that that’s happened to Brady as a starter.

But even despite all that, and regardless of the injury, the poor OL play, and how sluggish they’ve looked for most of the season, Tom Brady is most definitely the last person you want to see across the field when you’re in the playoffs. Or in any football game, for what it’s worth.

That’s especially true if you’re Mike McCarthy. He could be coaching for his job after vastly underperforming in the playoffs last season and an embarrassing performance vs. the already-eliminated Washington Commanders in Week 18. 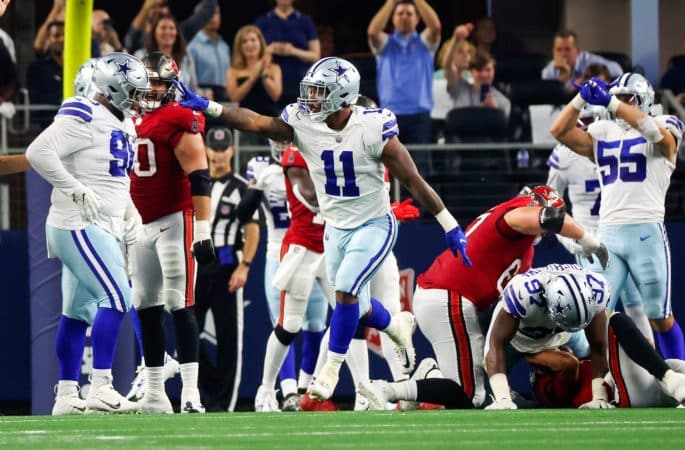 Dak Prescott: Despite playing in just 12 games, Dak Prescott threw 15 picks, most of those his fault and quite questionable. The talent is most definitely there, but he’s been fairly inconsistent this season and will be in the spotlight again on Monday night.

Tom Brady: While all signs point towards him coming back for another season, this could also be Tom Brady’s final game in the NFL, this time for real. So, even those who still don’t like him should make the most of the chance to watch him this time around.

Playoffs Predictions: NFL Bet of the week on Cowboys vs Buccaneers

The opening Cowboys vs Buccaneers spread has the visitors favored by nearly a field goal. We’re talking about the same team that was manhandled by a rookie QB getting his very first NFL snaps last season, so that tells you all you need to know about the 2022 Tampa Bay Buccaneers.

Even at their best, the Bucs weren’t all that great. They only made the playoffs because they play in the league’s worst division, and also because Tom Brady likely has made a pact with the Devil or something. They’re not a good football team.

Of course, trusting the Dallas Cowboys to get the job done in the playoffs, with Mike McCarthy calling the shots, is a massive leap of faith, let alone on the road. But their defense should be able to get to Brady with little-to-no trouble.

Also, this game means more for Dan Quinn, who was on the losing end of that Falcons-Patriots Super Bowl when they blew a 28-3 lead, so you better believe he’s got Brady more than well-studied. It won’t be pretty, but the Cowboys will get it done.

The opening Cowboys vs Buccaneers odds have this game total at just 45 points. That’s more than logical, as the Dallas Cowboys will only have a shot to win this game as long as they keep their offense away from the field, especially with Dak Prescott struggling with turnovers and decision-making.

The Tampa Bay Buccaneers’ offense has been dead in the water for most of the season. They have no running game whatsoever and lack another threat in the passing game other than Mike Evans. Also, their offensive line has been dreadful, to say the least.

The Cowboys, on the other hand, have looked like their best when they’re feeding Tony Pollard. They have to rely on the running game with him and Ezekiel Elliott trying to keep that clock running with some long offensive drives.

Of course, Tom Brady will always bode a threat, and he’s not the kind of guy you want to bet against. But if the Cowboys want to make it past this Monday, they’ll need to make sure he stays on the field and Prescott is more of a VIP guest with sideline tickets.

FAQs about Cowboys vs Buccaneers

They made the playoffs as divisional champions.

He hasn’t made a decision yet.

Visit our player props page to find out.

Yes, visit our NFL odds page and get them.

Yes, all you need to do is check out our NFL picks today page.