Two teams streaking in the opposite direction will take the gridiron by storm when the red-hot Washington Commanders visit the slumping New York Giants for an exciting divisional clash. Notably, this game could have major postseason implications at the end of the season.

Ron Rivera’s side has found its groove without Carson Wentz behind center. And even though Taylor Heinicke isn’t a flawless quarterback by any means, he’s earned his teammates’ respect and has proven to be a better leader and more efficient player in every single aspect.

So long for Brian Daboll’s team’s impressive start to the season. The New York Giants are now 7-4 after starting the year with a 7-1 record. They may have hit a wall and peaked too early, and injuries on both sides of the field have sure taken a toll on their chances.

But the Giants are a resilient and pesky squad, and they’ve fought hard in nearly every matchup this season, so it may only be a matter of time before they straighten the ship and get back to their winning ways. It’s still not too late for the G-Men. 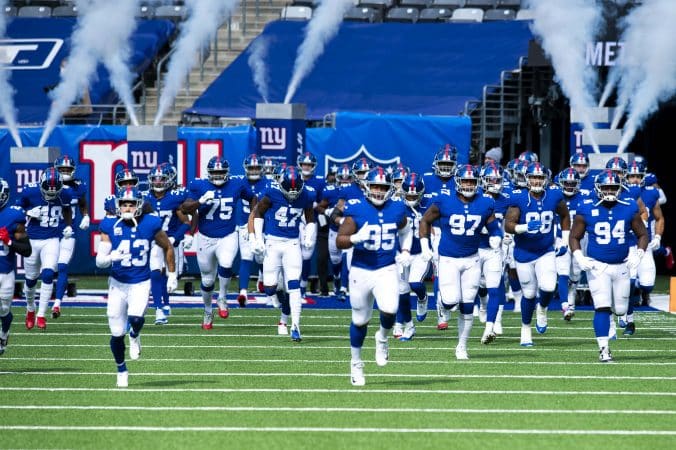 Brian Robinson: The first-year running back has been one of the biggest feel-good stories of the season. He came back after being shot before the start of the season and is only getting more comfortable and efficient as the weeks go by. He’s coming off his best performance of the season and should be another major factor again.

Saquon Barkley: When healthy, Saquon Barkley has proven to be the best running back in the game by a long margin  He’s just unstoppable, especially in the open field. The New York Giants need to feed him early and often if they want to snap their skid, so we expect this to be a heavy afternoon for the Penn State product.

Week 13 Predictions: NFL Bet of the week on Commanders vs Giants

The opening Commanders vs Giants spread has the home side as 2.5-point underdogs. This doesn’t come as a surprise, considering how much they’ve struggled over the past month or so. Some believe their record is misleading, and this is their reality.

But let’s not ignore the fact that these two teams are divisional rivals who know each other pretty well. They know each other’s flaws and have had this game marked in their calendars for months, so this might as well be closer than most people expect.

The Washington Commanders are playing at their best level right now, and having Chase Young back on the gridiron will be great for them as they look to put more pressure on Daniel Jones. But the Giants are better than their recent performances show.

All things considered, this game could go down to the wire, and riding a 2.5-point spread with a visiting team in a divisional game isn’t a winning formula all that often. Give us the points with the better team on their home field.

The opening Commanders vs Giants odds have this game total sitting at just 40.5 points. That would’ve made sense at the beginning of the season when the Washington Commanders couldn’t get a first down to save their lives, but not anymore.

For starters, Daniel Jones and Darius Slayton are slowly becoming a deadly duo and continue to develop chemistry for explosive plays. On the other hand, both teams feature more than enough playmakers on their offensive units.

Brian Robinson has been on a tear as of late, and he could have a field day against the Giants’ injury-riddled defensive front. As for Saquon Barkley, there’s no human force that can stop him when he’s healthy and at his best.

The Commanders have one of the most promising wideout corpses in the league, and Heinicke won’t hesitate to sling the ball down field. We expect this game to have multiple lead changes and easily top the 40.5-point plateau.

FAQs about Commanders vs Giants

Yes, they can still make it.

Of course, check out our player props page to get the best prop bets for the week.