The New York Giants (8-6-1) can almost taste the playoffs for the first time since the 2016 season. They just have to win a home game against a lost Indianapolis Colts (4-10-1) team that is coming off a 20-3 loss to the Chargers. Nick Foles will continue to start for the Colts, but he looked rough on Monday night.

The Giants lost a close one in Minnesota, but the offense showed some promise with Daniel Jones throwing for over 300 yards to one of the league’s bottom-ranked receiving corps.

There are several playoff-clinching scenarios for the Giants this week, but the simplest and perhaps most probable one is to just win this game at home. The Colts have won one game since Jeff Saturday took over as interim coach, and that was against the Raiders, who invent ways to lose games under Josh McDaniels.

For Brian Daboll’s rookie season to be a success, he needs to win this game to secure a winning record and playoff spot. It has been a bumpy ride since the 6-1 start, but this is exactly the kind of opponent the Giants were loading up wins against early in the season. Don’t let this thing come down to Week 18 when the Eagles may or may not try to win their final game.

The NFL Week 17 odds have the Giants as a 5.5-point home favorite with a total of 39 points.

Players to watch in the Colts vs. Giants game

Jelani Woods: The Colts drafted Woods in the third round this year, but they often forget about using him when he has shown some good receiving ability at a position that can be a real asset, especially for veteran quarterbacks. Woods got his first start of the season against the Chargers and made two big catches early, but he only finished with one more catch and 43 yards on the night. He needs to be more involved.

Isaiah Hodgins: The Giants have to manufacture receiving options any way they can with their injuries and disappointments this year in the receiving corps. Hodgins played with Buffalo earlier this season before coming over to the Giants. He has been helpful since his Week 10 debut with 44.1 yards per game. He has also caught a touchdown in three of the last four games, tying him with Richie James for the team lead in touchdown catches. 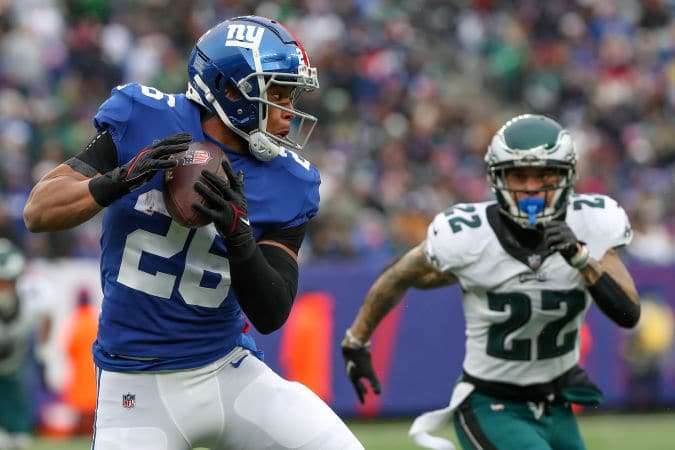 Our Best NFL Bets for the Colts vs. Giants game

We have two NFL Week 17 predictions as the Giants look to clinch their spot in the playoffs.

The Colts vs. Giants spread opened with the Giants as a 3-point home favorite before moving up to 5.5 points going into the weekend.

This game could be close if only because the Giants are not good at scoring a lot of points. But you have to like the idea of blitzing Foles heavily behind one of the worst offensive lines in the league when he looks less mobile than Matt Ryan did. He threw three picks and took seven sacks on Monday, making the Chargers look like the 1985 Bears. Foles should be better in his second start for the Colts, but that’s not saying much.

The Giants do love to blitz with defensive coordinator Wink Martindale, and rookie Kayvon Thibodeaux, the No. 5 pick in the draft, has made a few splash plays this season with two forced fumbles. Maybe he could get a third in this game.

But this could be a good game for Saquon Barkley and the ground game as the Colts do have decent cornerback play that may make it tough on Jones to throw for a lot of yards.

However, this Indy team stinks. The Colts let Dallas rip off 33 unanswered in the fourth quarter, they let the Vikings come back from 33-0 with 39 in the second half, and they just let the Chargers win by 17 points. None of the Chargers’ previous 14 games were wins by more than 10 points. That team winning by 17 is like a regular team winning by 30.

Even if the Giants just win a 23-16 game, that will be good enough for the spread here. Trust the Giants to do that at home to clinch the playoffs with one game left for your NFL bet of the week.

None of the three games Matt Ryan did not start for the Colts this year reached more than 33 points. Ryan had his flaws, but he was still the best option at quarterback for this team. Foles looks lost and it is hard to see him doing that much better in this game on the road against an aggressive defense. The Colts might max out at 16 points here, which is probably being generous.

But the 2022 Giants are a fascinating team in that they have scored between 18 and 24 points in 12 games this season – three more than any team in a season in NFL history and they still have two games left.

The only time the Giants scored more than 24 points was when they scored 27 points in London against the Packers. The lowest they have dipped to was 13 points in Seattle, but you could have bet on them to finish in that 18-24 range and been a winner 80% of the time this year.

The Colts look terrible at times, but it usually is due to turnovers, which they lead the league in. But when they aren’t giving up short fields and return touchdowns, they are hard to score on as Justin Herbert and the Chargers found out. The Colts are still the only team to hold the Chiefs and Eagles under 20 points this year.

With that in mind, look for the Giants to sit in their 18-24 point range and for the under to hit again in this one.

Frequently asked questions about the Colts vs. Giants game in Week 17

The Giants are 11-4 ATS this season, the second-best record in the NFL. The Colts are 6-9 ATS, tied for the fifth-worst record with several teams.

Remember to check out our player prop picks and daily NFL predictions.