The Indianapolis Colts will venture to AT&T to square off against the Dallas Cowboys. The Sunday Night Football matchup is set for 8:20 p.m. ET and NBC will broadcast the event.

The NFC East is shaping up for some late drama between the Cowboys (8-3) and Eagles (10-1) come week 16. Dallas is trying to leapfrog its rival but will need to start by beating the Colts.

At 4-7-1, the Colts aren’t mathematically eliminated from playoff contention but will probably need to win out if they are to sneak in.

Dallas is on a two-game winning streak with impressive wins over the Minnesota Vikings (40-3) and the New York Giants (7-4). The Cowboys and Giants were exchanging blows on Thanksgiving but with 8:53 remaining in the fourth quarter, America’s team took a two-score lead (28-13) and control of the game. New York scored a garbage-time touchdown but ultimately fell 28-20.

On the contrary, Indianapolis has lost two games in a row against the Eagles (17-16) and Steelers (24-17). Jeff Saturday’s bright start as a first-time NFL coach has darkened since his win over Las Vegas in Week 10.

Oddsmakers have the odds set in favor of the Cowboys winning as 10.5-point favorites on the spread and -540 on the moneyline, compared to the Colts at +420. Currently, 54% of bets have been placed on Dallas to cover and 95% of the money is on them to win outright.

Players to watch in the Colts vs. Cowboys contest

Michael Pittman Jr.: The third-year wide receiver seems to get better each year. This season, the 2020 second-round pick has 74 receptions (sixth) for 739 yards (14th) and two touchdowns.

CeeDee Lamb: After Amari Cooper was traded to the Browns in the offseason for a fifth-round pick, Lamb became the primary weapon on the outside for Jerry Jones’ team. The former Oklahoma Sooner has 64 catches (10th) for 857 yards (seventh) and five touchdowns this campaign. 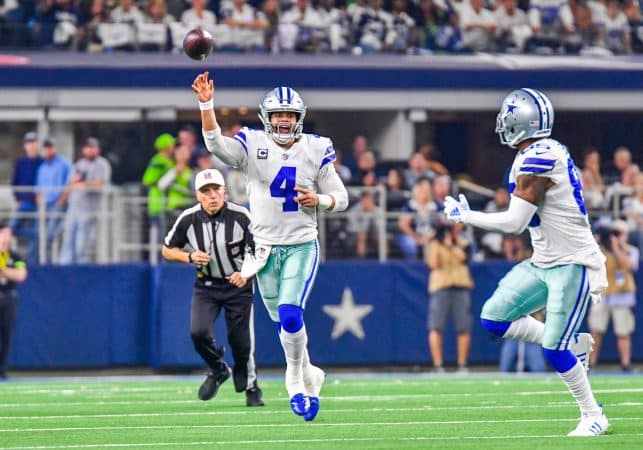 Our NFL bet of the week for the Colts vs. Cowboys

The Colts’ poor record is not indicative of how the team has played this season. In nine of the 12 games they’ve played, they’ve either lost by less than a touchdown, tied or won. The biggest problem Indy has is the ability to close out games.

Primetime matchups have often been close this season. Dallas clearly holds more talent on both sides of the ball but a 14-point spread certainly gives the Colts some room to maneuver.

The Cowboys have only won four of their 11 contests by 14 points or more. In two of their previous three games, they’ve failed to cover the spread.

Since his return from a thumb injury, Dak Prescott has played well for the Cowboys and holds a 4-1 record. The former Mississippi State Bulldog holds the sixth-best quarterback rating in the NFL: 61.9.

Frank Reich benched Ryan for second-year pro, Sam Ehlinger, after the team’s 19-10 loss to Indianapolis. The coach was relieved of his duties after two-straight losses and Saturday was brought in. Saturday reimplemented Ryan as the starter and the team is able to at least keep games tight.

Dan Quinn’s Dallas defense has played at a Super Bowl level thus far. The unit is allowing the second-fewest points per game (17) and is limiting opponents to just 308.9 yards each matchup (6th). Micah Parsons and his fellow pass rushers have registered the most sacks in the NFL (45).

At ESTNN, we believe the Cowboys will win but won’t cover the alternate 14-point spread offered by DraftKings. The sportsbook is offering -169 odds for the bet.

The former Ohio State Buckeye started the year slow scoring only one touchdown in his first five games. Elliott then started to get hot scoring three touchdowns in two games before getting injured and missing nearly a month.

Elliott resumed his good form in his return against Minnesota by breaking the plane twice. Last week, he found the end zone yet again versus the Giants. The 27-year-old has scored six touchdowns in his last four games and has recorded six red zone touches the previous two weeks.

The game script fits the bill for Elliott this week since the Cowboys will likely be in the lead for the majority of the game. We believe it’s wise to take the former fourth-overall pick to score this week at -103 odds on Caesars Sportsbook.

Frequently asked questions regarding Indianapolis vs. Dallas in week 13

Tony Romo played 14 seasons with the Cowboys from 2003-2016. The Eastern Illinois product finished with four Pro Bowls during his tenure.