The 2022 NFL regular season is nearing its conclusion. We have just two weeks before the playoffs, and the AFC and NFC playoff pictures have started to take shape. However, on the AFC side, one of the teams that won't feature in the playoffs is the Cleveland Browns. The Browns were eliminated from playoff contention last weekend, after a disappointing 17-10 loss to the New Orleans Saints. Furthermore, QB Deshaun Watson posted the lowest completion percentage of his career last weekend, (48.4%) as he made just 15 of 31 passes, with no touchdowns and one interception.

Bonus disclaimer: OH only. 21+. New users and first wager only. Must register with eligible promo code. Bet amount of qualifying wager returned only if wager is settled as a loss. Maximum bet credit $1,500; must be used within 14 days of receipt. See Caesars.com/promos for full terms. Void where prohibited. Know When To Stop Before You Start.® Gambling problem? Call 1-800-GAMBLER

Bearing that in mind, Kevin Stefanski's men are currently at the bottom of the AFC North; they trail the third-placed Steelers by one game, and the division leading Bengals by five games. Indeed, Cleveland will go up against the Washington Commanders — a team that's battling for a spot in the playoffs, in week 17. This will be an interesting matchup, as the Browns are slight underdogs in this game. That said, let's take a look at the Cleveland Browns betting lines for this week.

Like we mentioned earlier, the Browns aren't the favourites in their week 17 clash against the Washington Commanders. This isn't a surprise however, especially considering the Commanders are still in the NFC playoff hunt, while the Browns have nothing left to play for. On that note, Cleveland are two point underdogs; they are valued at +110, while Washington can be backed at -125.

Next, we would like to mention that the Browns have a 7-8 record against the spread this season, and they failed to cover in two of their last three matches. Therefore, looking at the Browns spread this week, Cleveland +2 pays at -110, while Washington -2 is obviously  also worth -110. There's also the Browns over under this week, with the line at 40.5. In this case, both the over and under pay at -110.

What are the Cleveland Browns odds to win the Super Bowl?

To be fair, the Cleveland Browns won't participate in the playoffs come January, so it's impossible for them to win the Super Bowl this season. However, we would like to point out that they opened at 30/1 before the season started. Granted, the Browns weren't exactly one of the favourites to win the Super Bowl. This is partly because Cleveland didn't have their starting QB through the first 11 weeks of the season due to a suspension.

Interestingly, you can also bet on player props for the Browns vs Commanders match. These are specific bets on the performance of players in a match. For instance, there are quarterback props for both teams' respective QBs, with different lines. Browns QB Deshaun Watson has a 216.5 over/under line when it comes to passing yards for this match.

If Watson passes for up to 217 yards in this match, the under bettors lose. In like manner, those who bet on the over will lose if he passes for less than 217 yards. On the other hand, Washington Commanders QB Carson Wentz has a 214.5 over/under line for this game.

The player props market is very wide, and there are many options you can explore. These include bets on passing yards, passing touchdowns, longest pass made, and even interceptions. Moreover, player prop bets aren't limited to just the quarterback; as fans can also bet on player receiving yards, receptions made, player rushing yards, number of field goals made, and even defensive props for solo + assisted tackles. 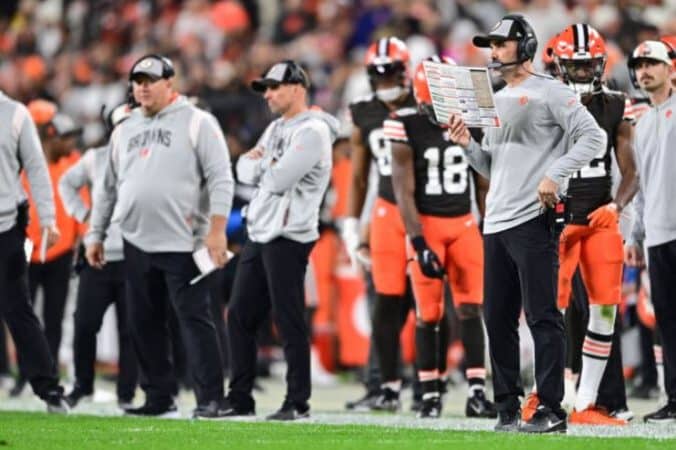 Analysis of the Cleveland Browns vs Washington Commanders match

Despite the Browns' disappointing campaign, there have been some bright spots, especially on offense. Kevin Stefanski's men are the fifth best rushing team in the NFL this season; they are averaging 147.3 yards per game on the ground. One player to keep an eye out for is Nick Chubb. With 1344 rushing yards this season, Chubb is the third-best rusher in the NFL, behind Josh Jacobs and Derrick Henry. It's important to mention that Nick Chubb is averaging almost 90 yards rushing per game. He has rushed for over 90 yards in his last two matches, and over 80 in four of his last five games.

However, the Commanders have done fairly well when it comes to stopping the run. They allowed 114.4 rushing yards per game, the 13th best record in the NFL. That said, Chubb can be backed at 8/9 to rush for over 67.5 yards this weekend.

Fans can make long-term wagers, on events or outcomes that will end in the future; these are called future bets. Just like prop bets, futures have a wide range of options, which include:

Admittedly, the Cleveland Browns won't be in the playoffs this season, so you can't place bets on most of these events. However, there are still futures you can bet on, like:

Heading into the 2021 season, the Browns were coming off an impressive 11-5 campaign, as they made the playoffs for the first time since 2002. This was Kevin Stefanski's first season as head coach; and Cleveland made it to the divisional round, after beating the Pittsburgh Steelers in the Wildcard.

Fans had high hopes for this team, and some pundits predicted the Browns could go all the way to the Super Bowl in 2021. Interestingly, Cleveland got off to a solid 3-1 start, with their only loss coming against Patrick Mahomes and the Kansas City Chiefs, who had won the AFC title the previous season. Things went downhill for the Browns however; they lost eight of their next 12 matches, and finished their 2021 campaign with a losing record.

Furthermore, Cleveland made some interesting off-season moves; which included signing star quarterback Deshaun Watson on a five-year, $230m deal, giving up three first round draft picks, a third round pick and two fourth round picks along the way. Did Cleveland give up too much for Watson? That remains to be seen.

Betting on the Cleveland Browns

Money line bets, also called straight up bets, are the easiest of wagers in American sports. This usually involves betting on the winner of a sporting event. For instance, if the Browns have a divisional match-up against the Baltimore Ravens, and the odds are as follows:

In this case, a $100 bet on the Browns would pay out a total of $205, while betting on the Ravens with the same amount would net $180, including the initial stake. Of course, money line bets usually include overtime.

On the other hand, spread betting is a little more complicated than the money line. Much like handicap betting, the spread depends on the number of points a team wins or loses by. For instance, if the Browns have to make a difficult trip to Kansas City to play the Chiefs, Cleveland would likely be significant underdogs. In a scenario with these odds:

In this case, the Browns would cover the +9 spread even if they lose — provided they don't lose by more than 9 points. Likewise, Cleveland would fail to cover the spread if they lost by more than 9 points, say a 27-14 loss. It's also important to note that spread bets can end in a push. For instance, if the Browns lost by exactly nine points in this case, it would be a push, and the initial stake would be refunded.

Over/under bets are pretty simple, they depend on the total number of points scored in a match. For instance, if the Cleveland Browns have a divisional match-up against the neighboring Cincinnati Bengals, and the over/over odds are as follows:

Can the Browns make the playoffs this season?

Unfortunately, the Cleveland Browns will not participate in the NFL playoffs in January, as they were knocked out of contention after their week 16 loss to the Saints.

Where do the Cleveland Browns play their home games?

The Firstenergy stadium hosts Cleveland's home matches. This stadium opened as the Cleveland Browns stadium, but was renamed for sponsorship reasons.

Which division do the Cleveland Browns play in?

The Cleveland Browns play in the AFC North division, along with the Baltimore Ravens, Cincinnati Bengals and Pittsburgh Steelers.

Have the Browns ever played in a Super Bowl?