Scoring Prop: Both Teams to Score 20+

The Kansas City Chiefs can finish 14-3 and possibly claim the AFC’s No. 1 seed depending on what the league does with Buffalo’s last two games. Standing in the way are the Las Vegas Raiders, who definitely earn an award for the most creative losses in the league this year. This team has blown as many fourth-quarter leads (six) as it has won games.

One of the few games where the Raiders did not have a fourth-quarter lead was in Week 5 at Kansas City, but they did lead 17-0 in the first half. That was a wild game that turned once the referees called a horrific penalty on the Chiefs that fired up both the crowd and players. Travis Kelce caught four touchdowns despite only gaining 25 receiving yards, producing one of the craziest stat lines in NFL history.

The Raiders still could have won the game with a field goal, but Davante Adams failed to haul in a pass near the sideline that proved costly. The Chiefs held on for a 30-29 win.

Since then, the Raiders have benched Derek Carr for Jarrett Stidham, who threw for 365 yards and three touchdowns against the top-ranked defense of the 49ers. If Stidham can do that against that defense, he gives the Raiders a fighting chance in this one to spoil Kansas City’s top seed bid.

Players to watch in the Chiefs vs. Raiders game

Travis Kelce: Not only did Kelce manage to score four touchdowns on 25 yards against the Raiders, but he kept doing it on the same route. You would think this team would catch on, but coaching is not their strong point. Still, Kelce has gone five games in a row without a touchdown, and a sixth would be his longest drought ever with Patrick Mahomes. Look for him to score in this game at least once.

Davante Adams: The only player with more touchdown catches than Kelce this year is Davante Adams, who has 14. Incredibly, Adams is the first player in the 21st century to have 10 receiving touchdowns of 25-plus yards in a single season. He has done his part in coming to the Raiders, but the team has not fared well at closing games. Look for Adams to likely get a 15th touchdown in this game as he should become the third receiver to go over 1,500 receiving yards this season along with Justin Jefferson (1,771) and Tyreek Hill (1,687). 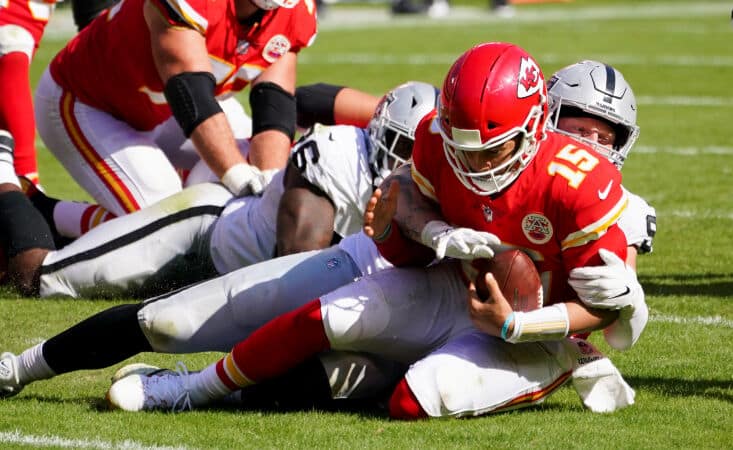 Our Best NFL Bets for the Chiefs vs. Raiders game

We have two NFL Week 18 predictions as the Chiefs look to wrap up a great regular season.

This is an intriguing one after the way Stidham played last week. If the 49ers just crushed the Raiders and made Stidham look terrible, this would be an easy pick for the Chiefs. But things did not go that way at all, and while Stidham got some incredible catches out of Adams down the field, that is something Adams can do. Adams had a huge game against the Chiefs as many No. 1 receivers have this year.

But the Chiefs are usually more focused on the road where Mahomes actually has better stats in his career than he does at home where he can get more careless with the ball. Six of the seven games this season where the Chiefs scored 30 points have been on the road, including all three games with over 40 points. The Chiefs scored 41 in their visit to Vegas last season.

But the Chiefs have also allowed four of their five highest point totals on the road, and the one time they did at home, it was these Raiders with 29 points. The Raiders got a career night out of Josh Jacobs, who is about to win his first rushing title.

The Raiders have weapons and apparently Stidham knows how to use them. This should be a high-scoring game, but it is hard to predict the Chiefs to beat anyone by double digits right now, especially teams that can score and play it close.

The Raiders lost 24-0 in New Orleans, their only loss by more than seven points all year, and their other nine losses have been by a combined 33 points. Take the Raiders to cover for your NFL bet of the week.

This feels like a good value pick given the last matchup was 30-29. But there are plenty of other reasons too:

Frequently asked questions about the Chiefs vs. Raiders game in Week 18

The game is being played at Allegiant Stadium in Las Vegas, Nevada.

The Chiefs are 5-10-1 ATS, which is tied with Chicago for the second-worst record this year. The Raiders are more solid at 8-8 ATS (1-0 as a home underdog).

Dating back to his first NFL start against the Broncos in 2017, Patrick Mahomes is 15-0 with the Chiefs against AFC West rivals on the road. The Chiefs have scored at least 23 points in all 15 games too. With one more win here, the Chiefs will surpass the 2011-15 Broncos for the longest road divisional winning streak in NFL history.

Remember to check out our player prop picks and daily NFL predictions.