Chargers (+3) to cover vs. the Raiders Alternate Spread

The Los Angeles Chargers will head to Allegiant Stadium to battle the Las Vegas Raiders. The divisional matchup is set for 4:25 p.m. ET and CBS will broadcast the matchup.

The Raiders’ playoff hopes hang by a thread at 4-7 but the team has managed to win back-to-back contests over the Broncos and Seahawks. Josh Jacobs capped off a historic day on the ground with an 86-yard touchdown run in overtime to help Las Vegas defeat Seattle.

The Chargers (6-5) are coming off a narrow 25-24 win over the Cardinals. Quarterback Justin Herbert found Austin Ekeler in the end zone with 15 seconds remaining in the fourth quarter and trailed 24-23. Head coach Brandon Staley opted to be bold and go for two, which was successful as Herbert hit Gerald Everett for the 2-point conversion.

The Chargers are one spot out of the playoffs on the bubble and trail the Jets (7-4) by one game. Las Vegas needs to essentially win out and hope for teams to lose as it sits in 12th.

Oddsmakers at BetMGM Sportsbook are favoring the Chargers by one point. On the moneyline, Los Angeles is -115 and Las Vegas sits at -115. The public has put 52% of their bets on the Chargers to cover and 58% of the money is on the Raiders to win straight up.

Players to watch in the Chargers vs. Raiders contest

Austin Ekeler: The Chargers’ offense flows through the dynamic tailback. The 27-year-old has 1,051 total yards this season and a combined 12 touchdowns through the air and on the ground.

Josh Jacobs: The former Alabama running back put on a historic performance against the Seahawks last week. Jacobs recorded 303 total yards for the contest and scored two touchdowns. The 24-year-old leads the NFL in rushing with 1,159 yards and is averaging 5.4 yards per attempt. 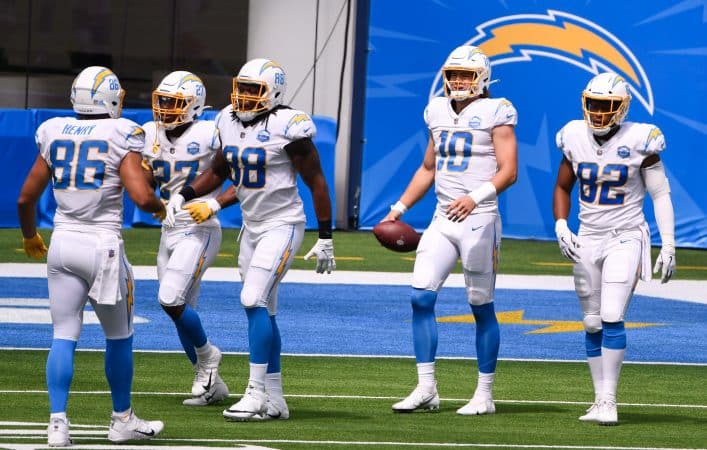 Our NFL bet of the week for the Chargers vs. Raiders

Staley’s squad beat Josh McDaniels’ Raiders in the first meeting of the season 24-19, in week one. Since then, the Chargers have gone toe to toe with some of the league’s top teams including the Chiefs and 49ers.

Herbert is a key reason the team is able to stay so competitive and win games. The third-year pro’s stats are among the best in the league.

At ESTNN, we think this contest will be tight. BetMGM is offering LA to cover an alternate 3-point spread at -155 odds on its sportsbook.

For the second-straight week, we are advising bettors to take Herbert’s over 1.5 touchdown passes prop. Herbert successfully did so against the Cardinals (three) and has a good opportunity to do so against Vegas’ weak secondary.

The Raiders are allowing 253 passing yards per game (26th) and have trouble creating turnovers with only four picks in 11 games (fifth-worst). The game log below shows how other quarterbacks have fared against Las Vegas.

In 2021, Herbert threw at least two scores in 12-of-17 contests. This season he’s done so in 6-of-11 and has done so for two weeks in a row. The Oregon product has hit the three-touchdown threshold on three occasions as well.

Our pick is to take the over 1.5-touchdown passes prop on FanDuel at -198 odds. If you’re interested in learning about more prop bets for week 13, read our NFL player props page.

Philip Rivers started 224 regular season games for the organization and also took part in 11 postseason contests. Both are franchise records. Rivers played from 2006-2019.