Over 47 Chargers vs. Jaguars

Two of the newest faces in the league will square off in the postseason for the first time. Justin Herbert and Trevor Lawrence will go toe-to-toe when the Los Angeles Jaguars travel to Florida to face the AFC South champions Jacksonville Jaguars in what promises to be an exciting matchup.

The Chargers entered the season as one of the strongest candidates to win it all. However, poor coaching and a plethora of injuries made them have a much more difficult time than what most analysts predicted. Still, they managed to finish the season on a seemingly high note.

The same can be said of Doug Pederson’s Jaguars. They drew plenty of criticism after their questionable spending spree in the offseason, yet they proved the naysayers wrong by taking the division home. They finished the season quite strong, and Trevor Lawrence has turned plenty of heads.

Now, both young QBs will look to take yet another step forward in their development. Nonetheless, both teams have found success also thanks to their defense and playmakers on both sides of the football, so this should be a nice football game to watch. 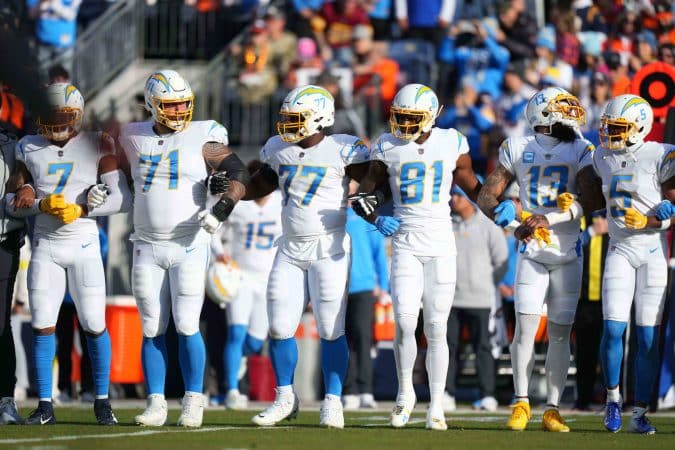 Justin Herbert: Justin Herbert has delivered and thrown dimes despite his wideouts missing plenty of time throughout the season. He’s an athletic freak, and one of the most entertaining players to watch in the league right now.

Trevor Lawrence: Trevor Lawrence is finally living up to the hype and expectations. The former first-overall pick isn’t coming off his best performance of the season, but he’s starting to look like the franchise cornerstone the Jaguars thought he’d be.

Playoffs Predictions: NFL Bet of the week on Chargers vs Jaguars

The opening Chargers vs Jaguars spread have the visitors as favored by nearly a field goal. That makes perfect sense, considering they boast the most experience and a more talented team, even though their edge may not be as big as some analysts predict.

Truth be told, the Jaguars have been the most resilient and better-coached team throughout the season. Even in the losses, they managed to compete hard until the very end, unlike the Chargers, who struggled to come back after going down early.

But then again, this is a game of adjustments, and the Chargers have had more time to get ready for this matchup than the Jaguars, a team that needed to wait until the fourth quarter of Week 18 before punching their postseason ticket.

Also, the Chargers have more and better playmakers, at least on the offensive side of the field. Justin Herbert will be running for his life all day long, but he has three big-play threats in Austin Ekeler, Keenan Allen, and Mike Williams.

The opening Chargers vs Jaguars odds have this game sitting at 47 points. That makes sense, as both teams are more than capable of marching up and down the field and putting up plenty of points on the scoreboard in no time.

That’s also the case when you have two elite passers like Herbert and Lawrence. They can sling the football 60+ yards down the field, even on the run, so there’s always a big-play threat when these guys set their feet on the gridiron.

The Jaguars have become stronger thanks to their defense, and you know they’re going to force multiple turnovers, especially against an offensive line that has given Herbert little time to operate. But the Chargers can also do the same, and Lawrence has struggled with fumbles all season.

All things considered, we believe this game will go down to the wire and feature multiple lead changes. Both teams can score, and emotions will be at an all-time high, so we expect this to be a shootout between two former college football standouts.

FAQs about Chargers vs Jaguars

No, but they both play in the AFC.

Yes, and you can find them on our NFL odds page.

Check out our player pops page to get the best prop bets for this week.

Yes, you can find them on our NFL picks today page.