Chargers (-2.5) to cover vs. the Colts Alternate Spread

The Chargers will travel to Lucas Oil Stadium to take on the Colts in primetime on Monday Night Football. Kickoff is slated for 8:15 p.m. ET and the matchup can be seen on ESPN.

Los Angeles (8-6) currently sits in the sixth seed of the AFC standings. Staley and his men will aim to win out and lock in a playoff spot for the first time in his and quarterback Justin Herbert’s careers.

The Colts (4-9-1) have been eliminated from reaching the playoffs but will play for pride. Head coach Jeff Saturday opted to bench starting quarterback Matt Ryan for veteran Nick Foles.

The Chargers enter the game on a high note after defeating the Tennessee Titans last week 17-14. Herbert led a 52-yard drive at the end of the game which was capped off by a Cameron Dicker 43-yard game-winning field goal.

🗣️ New to the Pro Football Hall of Fame@chargers QB Justin Herbert’s hand towel & playsheet wristband that he was using during last Sunday’s win against Tennessee, when he became the first QB in NFL history to pass for 4,000 yards in each of his first 3 seasons.

After beating the Raiders in his debut, Saturday has now lost four-consecutive contests. Last weekend, the Colts blew the biggest lead (33-0 at half) in NFL history to the Vikings.

Oddsmakers at FanDuel Sportsbook give the Chargers a 4.5-point edge over the Colts. On the moneyline, Los Angeles is -210 and Indianapolis is +176.

The game total for the contest is set at 45.5 points. Bettors have put 62% of their bets on the Chargers to cover and 60% of the money on them to win straight up.

Players to watch in the Chargers vs. Colts contest

Austin Ekeler: The “Swiss army knife” has recorded 14 total touchdowns and 1,327 total yards through 14 games. Ekeler has reached the end zone in four of his last five games and hasn’t needed to be the focal point of the offense since Mike Williams and Keenan Allen returned from injury.

Nick Foles: Indianapolis’ new starter will always be remembered for his 2018 Super Bowl victory with the Eagles. The last time Foles saw action was in 2021 with Chicago when he threw for 250 yards and a touchdown in a win over Seattle. 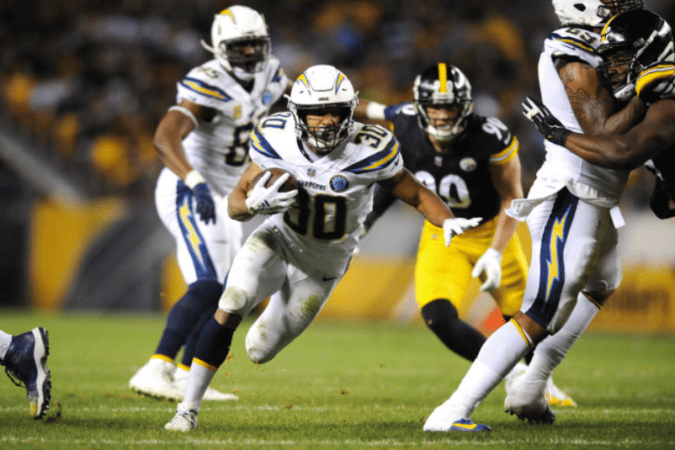 Our NFL bet of the week for the Chargers vs. Colts

The Chargers have now won back-to-back games and control their own destiny if they wish to make the postseason. Three of the team’s last four wins have come by six points or less.

Throughout the season there have been impactful injuries to LA on both sides of the ball. Wide receivers Keenan Allen and Mike Williams were forced to miss time but are now completely healthy. Defensive end Joey Bosa remains out with a groin injury but is expected to be ready for the playoffs.

Herbert has managed to play well and keep the team competitive throughout the season despite missing some of his favorite weapons. His stats below show how well the third-year pro has performed.

Indianapolis has lost seven of its last eight games and has failed to cover in five of its previous six outings. Los Angeles is 8-5-1 against the spread this year and are 12-2 ATS in their last 14 road games in Indy.

Our pick at ESTNN is to take the Chargers to cover an alternate 2.5-point spread. FanDuel Sportsbook is offering -186 odds for the wager.

Los Angeles seems to have finally found a long-term answer at kicker with Cameron Dicker. The 22-year-old has made 16-of-17 field goals this season which converts to 94.1% (T-2nd).

“Dicker the kicker” has made two or more field goals in six out of eight contests and with both teams reeling on defense, there will be plenty of opportunities for field goals.

Our advice is to bet on Dicker to make more than 1.5 field goals. The wager has -120 odds on DraftKings sportsbook.

Frequently asked questions regarding Los Angeles vs. Indianapolis in Week 16

Los Angeles selected Herbert with the sixth-overall pick in the 2020 NFL Draft out of Oregon.