The Chargers will travel to the Mile High City to take on their division rivals the Broncos on Sunday. Kickoff is slated for 4:25 p.m. ET and the matchup can be seen on CBS.

Los Angeles (10-6) currently sits in the fifth seed in the AFC and has clinched a postseason berth. Staley’s team can’t win its division and is playing for seeding with Baltimore (10-6) standing in the sixth seed.

There’s a good possibility the Chargers decide to rest many of their starters as they shift their focus toward Wildcard weekend. It’ll be the first playoff game in quarterback Justin Herbert’s young career.

Denver (4-12) is playing for pride and will try and beat Los Angeles so it doesn’t remain winless against conference opponents this season. After trading for Russell Wilson and hiring Nathaniel Hackett in the offseason, the Broncos have had a disaster of a year resulting in Hackett’s firing.

The Chargers are on a four-game winning streak and are coming off a 31-10 demolition of the Rams. The Broncos have lost seven of their last eight contests and head into the week after a narrow 27-24 loss away to the Chiefs.

The current moneyline odds for this matchup on BetMGM Sportsbook are Los Angeles (+145) vs. Denver (-175). Oddsmakers favor the Broncos as 3.5-point favorites at +100 odds.

The total for the matchup is set at 40 points. Among the public, 53% of spread bets have been placed on the Broncos to cover and 66% of the money is on the Chargers to win straight up.

Players to watch in the Chargers vs. Broncos contest

Joshua Palmer: The 23-year-old wideout has seen plenty of action this season with Keenan Allen and Mike Williams being on and off the gridiron with injuries. Palmer is the WR3 with the two healthy and should see plenty of action when Staley rests the two for a significant part of the game. The Tennessee product has accrued 68 receptions for 730 yards and three touchdowns.

Jerry Jeudy: The former Alabama Star began the season quietly but has impressed over the last few weeks. In three of his last four games, Jeudy has recorded 73 or more yards. The 15th overall pick has recorded 28 catches in his previous four outings as well. 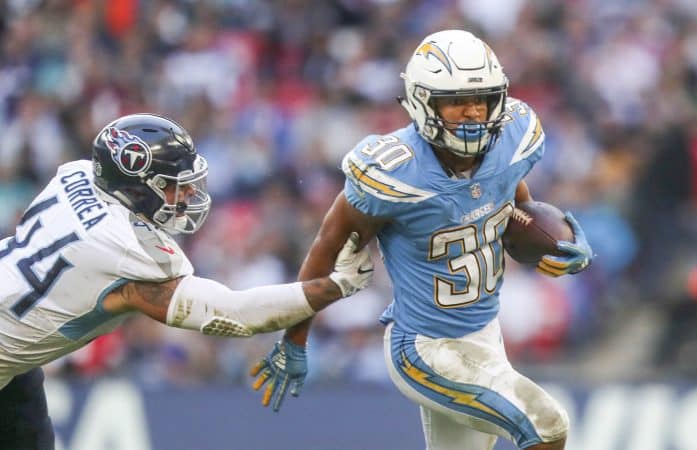 Our NFL bet of the week for the Chargers vs. Broncos

The Broncos are on the verge of making history Sunday, but not the good kind. Denver has lost nine games by just one score this season and will be the first team in NFL history to lose 10 if they fall to the Chargers by eight points or less.

Games have been so tight for Denver that five of their losses have been by a field goal. It would be nice for interim head coach Jerry Rosburg to avoid that feat and get Denver its first win over the Chargers since 2020.

It’s been a disaster offensively for Wilson as his offense ranks last in scoring (16 points per game) and 24th in total offense (316 yards per game). The defense has been the opposite and is a top-10 unit. It ranks sixth in yards allowed (318) and 10th in scoring defense (20.7 PPG).

@DangeRussWilson and the #Broncos O-Line have crumbled under the pressure this season👀😬 (via @NFL_Stats)#NFL #BroncosCountry #RussellWilson pic.twitter.com/TkRyvbGBNR

Wilson has had by far his worse year in his 11th season as a professional. The former Seahawk’s stats below showcase just how poorly he’s performed.

The Chargers’ starters probably won’t see much more than a half of play. They’ll still be dangerous while on the field with Pro Bowlers Justin Herbert, Austin Ekeler and Keenan Allen leading the way.

The last time the two teams met, Los Angeles squeaked out a 19-16 victory. Dustin Hopkins kicked a 39-yard field goal with 2:38 remaining in the fourth quarter to seal the win.

The Broncos are 4-1 against the spread in their previous five games and are 8-1 outright against the Chargers in their last nine matchups when playing them at home.

Our pick is to take the Broncos on the moneyline at BetMGM. The sportsbook is providing -175 odds for the wager.

The words “over” and “Broncos” have certainly not gone hand in hand for the majority of this season. Although, recently, Denver has given us a reason to believe 40 points might be too low of a total for this contest.

In three of the Broncos’ last four games, the total has easily cleared 40 points. The average total throughout that span has averaged out to 54.26 points per game.

Six of the last eight Los Angeles games have had 40 or more points as well. Even if Staley rests the starters, the Chargers are deep and have weapons on their bench.

At ESTNN, we believe it’s wise to take the over 40-point total on DraftKings at -110 odds. If you’re interested in learning about more prop bets for week 18, read our NFL player props page.

Frequently asked questions regarding Los Angeles vs. Denver in Week 18

The Chargers selected Williams with the seventh overall pick in the first round of the 2017 NFL Draft out of Clemson.