The Arizona Cardinals (4-11) blew a 10-point lead in the fourth quarter to the Buccaneers in Week 16, the latest loss in a disappointing season. But at least Colt McCoy will be back from a concussion to resume duties at quarterback for the injured Kyler Murray. If McCoy had been playing instead of Trace McSorley on Christmas, the Cardinals likely win that game.

The Atlanta Falcons (5-10) have been eliminated from the NFC South race after losing in Baltimore in Desmond Ridder’s second start. Ridder showed improvement and was able to throw for over 200 yards this time, but Drake London lost another fumble on a completed pass for him, and the offense had some really bad ideas for running plays on fourth down in the fourth quarter.

With the playoffs and No. 1 pick in the draft out of reach for both teams, this is just a matter of getting better and getting reps in for young players. The NFL Week 17 odds have the Falcons as a 3-point home favorite with a total of 42 points.

Players to watch in the Cardinals vs. Falcons game

J.J. Watt: One of the best defenders of all time, J.J. Watt announced earlier this week that he will retire after this season. That means he just played his last home game. Watt has 111.5 sacks and has won Defensive Player of the Year three times. He will be a first ballot Hall of Famer for sure, so enjoy his last couple of games while you can. Watt just needs half a sack to notch another double-digit sack season and his first since 2018.

Tyler Allgeier: He needs 183 rushing yards in the last two games to break 1,000 yards on the season, which would be impressive for a fifth-round pick. Allgeier could finish as the leading rusher in his rookie draft class too. The Falcons certainly love to run the ball more than most teams, but Allgeier has earned his share of carries in a loaded backfield that also features Cordarrelle Patterson. Look for the Falcons to get him closer to 1,000 in this one. 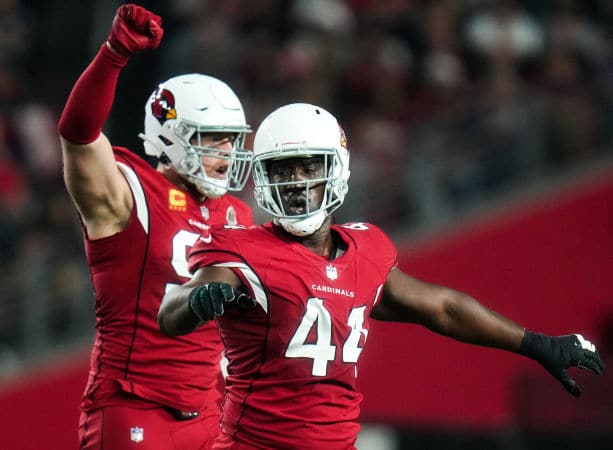 Our Best NFL Bets for the Cardinals vs. Falcons game

We have two NFL Week 17 predictions for this matchup of NFC teams.

The Cardinals vs. Falcons spread opened with the Falcons as a 3-point home favorite. It has consistently stayed at that mark with only a few sportsbooks going up to 3.5 points.

It is a good thing the Cardinals are getting Colt McCoy back, but he has not been very effective at putting up points this year. The Cardinals have not surpassed 15 points in the last three appearances for McCoy. One of the best ways to attack Atlanta is through the air, but the Cardinals are not a dominant passing team with McCoy under center.

Worse, McCoy is still 0-22 in his career as a starter when his team allows 20 or more points. Now the Falcons may not be a lock to get to 20, but they have done it seven times this season.

The other reason to pick Atlanta is that this team loves to run the football, surpassing 100 yards in all but one game this year (90 rushing yards vs. Rams). The Cardinals are 0-10 when allowing 100 rushing yards this year, and only two of those losses were by three points (the rest were considerably worse). This team has a hard time keeping it close with a team that can run well, and the Falcons can do that with Allgeier and Patterson.

The Cardinals have eight turnovers in the last three games while the Falcons have only turned it over once in each of the last four games despite a losing streak. The game will likely be close since neither team is really capable of running up a big lead this year, but we are going to trust the Falcons to play better at home and lean on the ground to beat Arizona.

Friday Night Update: It appears Colt McCoy is suffering concussoin symptoms and David Blough will start for Arizona. This only strengthens our pick of Atlanta.

Be sure to read our NFL picks page for more betting tips.

These teams started the season with some decent skill players on their depth charts, but between disappointing performances and injuries, we are seeing them scrape by in low-scoring games as we move into January and the final two games.

Six of the last seven Atlanta games have finished under 42 points. The Falcons have only scored more than 18 points in one of their last seven games.

All three of Arizona’s games since the bye week and Murray injury have finished under 42 points. The Cardinals have not scored more than 16 points in four of their last five games. Despite ranking 30th in points allowed this season, Arizona has not allowed more than 24 points on the road outside of one game this season (34 in Minnesota). Three of the four games where Arizona held a team under 20 points were on the road, and the other game was last week against Tampa Bay.

Without many points coming through the passing game for these teams, the under is a great choice for your NFL bet of the week.

Frequently asked questions about the Cardinals vs. Falcons game in Week 17

The game is being played at Mercedes-Benz Stadium in Atlanta, Georgia.

Since 2019, Kingsbury’s Cardinals are 16-6-2 ATS (72.7%) as a road underdog, the third-best record in the league. This has been his strong suit in his career as playing at home is where the Cardinals have been terrible. But most of those games were with Kyler Murray at quarterback instead of a backup like Colt McCoy, who is 4-10 in his last 14 starts.