The NCAA tournament is back in the good old format and the excitement is at the highest possible level as usual. March is the period of the year when everyone is following their favorite team hoping to go all the way but the tournament won’t be as exciting if there aren’t major upsets.

The first two rounds of the tournament has seen the defending champion already being eliminated. Baylor managed to get back from a 25-point second half deficit against North Carolina to send the game to overtime but fall short in the extra period after the Tar Heels regrouped and got the job done.

The Tar Heels will face UCLA in the Sweet 16 after the Bruins defeated Saint Mary’s by a 16-point differential.

Gonzaga is still the top favorite to win the tournament but the top ranked team in the country was challenged in the second round as the Memphis Tigers had a double-digit lead at halftime. Drew Timme led the Zags comeback scoring 21 of his 25 points in the second half to avoid huge upset.

The Bulldogs will go against one of the dark-horse candidates, the Arkansas Razorbacks in the Sweet 16 after they went past New Mexico State who stunned UConn in the opening round.

The second ranked team in the country, the Arizona Wildcats, were also with their back against the wall as TCU proved to be a real treat in the second round having a three-point lead in the last minute of the game. Still, the Wildcats survived as Bennedict Mathurin made a three to send the game in overtime. There, it was all Arizona as the favorite managed to dominate the extra five minutes and advance to the Sweet 16 where they will face the Houston Cougars. 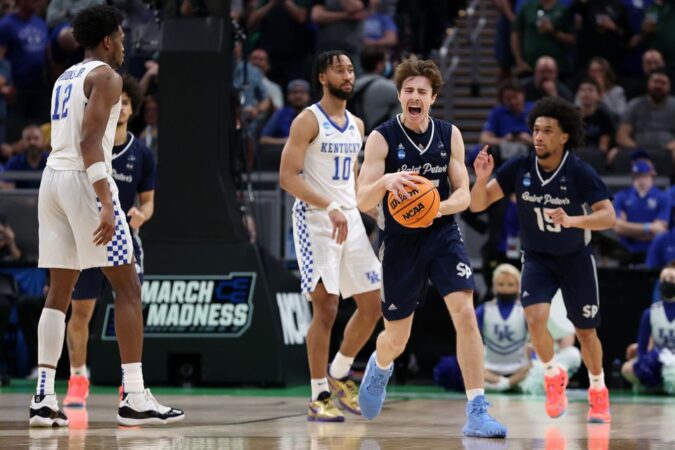 The Cinderella story of the first two rounds is definitely St. Peter’s as the Peacocks upset Kentucky in the opening round and did the same against Murray State. Doug Edert is the face of the tournament so far as the 6-2 guard made some crucial plays to help the Peacocks reach their first Sweet 16 in school history.

St. Peter’s will play Purdue in the Sweet 16 as the Boilermakers had two confident wins in the opening rounds.

Duke didn’t have any problems reaching the Sweet 16 winning by double-digit against Michigan State and Cal Fullerton. Coach Mike Krzyzewski is in his final season with the Blue Devils and an eventual loss would mean that he is done for good.

Duke will play Texas Tech in the next phase, a team that is ready to push the Blue Devils to the limit.

Michigan didn’t have a promising regular season but Juwan Howard’s team defeated Tennessee to reach the Sweet 16 where they will meet Villanova who won by a total of 30 points in the first two rounds.

Kansas is among the top 3 candidates to win the tournament this year and they showed their full strength in the first two rounds. They will face Providence who went past another first-round sensation, Richmond.

The Miami Hurricanes are another team that came out of nowhere to the Sweet 16. The U defeated USC in a tight game in the opening round and then stunned Auburn. The Hurricanes will play Iowa State who defeated Wisconsin in the first round.

So, we know that you are already thinking about placing your bets for the Sweet 16 phase of the NCAA tournament and using the Caesars Sportsbook Promo Code USBETCZR for $1,100 on NCAA Sweet 16 will make your experience even more exciting.

What do you get with the Caesars Sportsbook promo code?

When it comes to risk-free bet offers, Caesars’ offer is certainly one of the best, with a very generous offer getting your new sportsbook account off to a great start with the Sweet 16.

How to use the Caesars Promo Code

BET ON MARCH MADNESS WITH caesars>

The Sweet 16 program starts on Friday, March 25th, so hurry up and use the Caesars Sportsbook Promo Code for March Madness. Eight games will be on the schedule for the weekend and if you mixed the promo code with a little luck and a basketball knowledge, you may win what every bettor dreams of.