The Tampa Bay Buccaneers will travel to Santa Clara to take on the San Francisco 49ers on Sunday. Kickoff is scheduled for 4:25 p.m. ET and the contest can be seen on FOX.

Tom Brady will hope to capture a win against his hometown team and move Tampa (6-6) to a winning record. The Bucs currently lead their division and are slated to host a Wildcard postseason game as the No. 4 seed in the NFC.

San Francisco (8-4) are in a tight NFC West race. The Niners currently sit one game ahead of Seattle (7-5).

The Buccaneers looked as if they were headed for a disappointing loss against their rivals, New Orleans before Brady orchestrated a nearly impossible comeback. The Saints led 16-3 with 3:01 remaining on the clock. Brady put together back-to-back scoring drives capped off with a 6-yard touchdown pass to Rachaad White with three seconds left on the clock.

According to ESPN’s algorithm, the Saints had a 99% chance of winning when they led by 13 points with just over three minutes. The comeback victory was the largest of Brady’s decorated career.

The 49ers are coming off an impressive 33-17 win over the Dolphins but lost starting quarterback Jimmy Garoppolo during the matchup due to injury. The 31-year-old will miss the rest of the regular season and will be replaced by rookie Brock Purdy.

Oddsmakers at FanDuel Sportsbook are favoring the 49ers by 3.5 points. On the moneyline, Tampa Bay is +154 and San Francisco is -184. Gamblers have put 56% of their bets on the 49ers to cover and 99% of the money on them to win straight up.

Players to watch in the Buccaneers vs. 49ers contest

Mike Evans.: The Pro Bowl wide receiver leads the Bucs with 761 yards off 55 receptions and has scored three touchdowns this season. He has slowed down though and has failed to record more than 59 yards in each of his previous four contests. He’ll need to put on a good performance if Tampa is to upset San Francisco come Sunday.

Brock Purdy: In four years at Iowa State, the rookie threw for 12,170 yards, 81 touchdowns and 33 interceptions. The Gilbert, AZ native will have a lot of pressure to move the chains for the Niners’ offense and represent them in a positive way in the postseason. 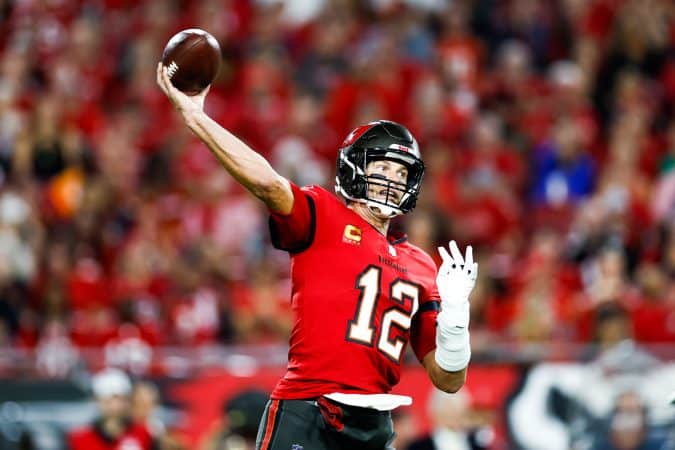 Our NFL bet of the week for the Buccaneers vs. 49ers

Kyle Shanahan and his 49ers are in the midst of a five-game winning streak and are easily one of the hottest teams in the league. Throughout the streak, they’ve beaten both LA organizations, the Cardinals, Saints and Dolphins.

If Garoppolo was starting, we would probably advise taking San Francisco to cover. Instead, the last pick in this year’s draft, Brock Purdy (Mr. Irrelevant) will be.

The Iowa State product looked decent when called upon against the Dolphins in his debut. Purdy completed 29-of-46 passes for 276 yards, two touchdowns and two interceptions. He finished with a quarterback rating of 55.

The 262nd pick won’t be facing a mediocre Miami defense this week though. He’ll be lining up against a Bucs’ defense ranking fifth in the NFL in points surrendered (18.3 per week) and eighth in total defense (313.8 yards per game).

Tampa has also recorded the fourth-most sacks (38). The 49ers have a great defense of their own, ranking both first in total yards (283.9 surrendered per game) and in points per game (15.8).

At ESTNN, we expect this game to be a tight defensive battle. We’ll take Tom Brady and the Bucs covering an alternate spread of 5.5 points at -154 odds on FanDuel Sportsbook.

Brady’s slot receiver is once again the top-targeted wideout in the Tampa offense with 99 in 12 contests. The 26-year-old has seen at least double-digit targets in seven of his previous nine games and has 13 in each of his last two games.

The 54.5 receiving yard prop at DraftKings seems too low and very valuable. Godwin has recorded 63 or more yards in four of the last five outings. He has beaten the number in 70 percent of games this season as well.

This year, Godwin is averaging 64.8 receiving yards each week. Our pick is to take the over 54.5 on DraftKings at -145 odds.

Mike Evans is the franchise’s all-time leader in receiving. The former Texas A&M Aggie is first followed by Mark Carrier and Kevin House.