The Pittsburgh Steelers are 8-8 and the Cleveland Browns are 7-9 heading into the final game of the regular season. If Cleveland pulls off the sweep, it will finish ahead of the Steelers in the standings for the first time since the 1989 season. That is how long it has been since the Browns had a better year than Pittsburgh.

It looked like a foregone conclusion when the Steelers were 2-6 with a 29-17 loss to the Browns back in Week 3. But so much has changed since then. The Browns lost too many close games early in the year, then saw the offense crater once Deshaun Watson replaced Jacoby Brissett at quarterback.

The Steelers switched to rookie Kenny Pickett the week after the Cleveland loss, and after he was throwing a lot of interceptions against good teams, he calmed down after the bye week and has been intercepted once as the Steelers have gone 6-2 and faced an easier schedule. Pickett’s play is still not going to make anyone forget the early days of Ben Roethlisberger, but he has provided some excitement down the stretch with game-winning touchdown drives in the last two weeks against the Raiders and Ravens to get to this point.

Mike Tomlin prides himself on never having a losing season, and he can secure another winning season with a win at home here against a hated rival. It would be the 19th season in a row for the Steelers to avoid a losing record, which would tie the 2001-19 New England Patriots for the second longest streak in NFL history. Remarkable stuff.

The NFL Week 18 odds have the Steelers as a 2.5-point home favorite with a total of 40.5 points. Pittsburgh needs to win, needs New England to lose in Buffalo, and needs the Jets to beat Miami to make the playoffs as the No. 7 seed. The Steelers needed more improbable things to happen last year and they did, but is the most likely leg of them all to hit a Pittsburgh win?

Players to watch in the Browns vs. Steelers game

Nick Chubb: Remember when Chubb scored all the time? He has not found the end zone in the five games since Watson took over at quarterback, and he is barely hanging onto his 5.0 yards per carry average this season, a mark he has hit in every season of his career. Pittsburgh has been a tough opponent for Chubb. He only has three touchdowns in nine games against them, and he has never rushed for more than 76 yards in his four visits to Pittsburgh.

Diontae Johnson: It’s now or never, Diontae. The receiver has zero touchdown catches this season, giving him the most targets (137) since 1992 and the most catches by a wide receiver (84) in NFL history with zero touchdowns to his name. It’s hardly all his fault as the Steelers have just 11 touchdown passes this season, and not many of those are to wide receivers. But we’ll see how much of a priority the Steelers put on ending this streak this week. 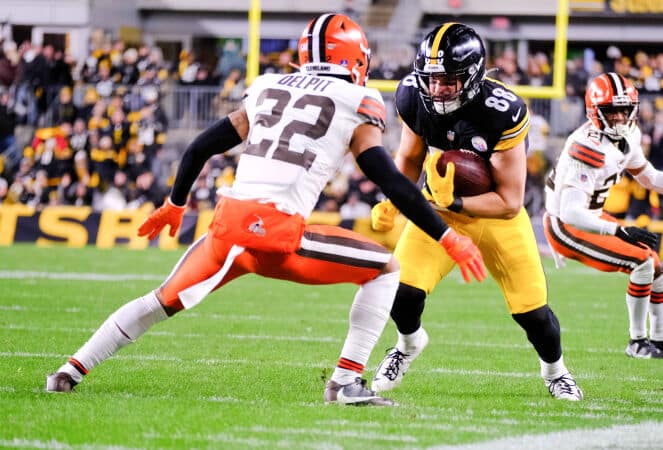 Our Best NFL Bets for the Browns vs. Steelers game

We have two NFL Week 18 predictions for this AFC North rematch.

The Browns vs. Steelers spread opened with the Steelers as a 2.5-point home favorite and it has remained consistent throughout the week.

Are the Steelers a threat to anyone if they sneak into the playoffs? No, but there are still things to play for here, and pride in beating Cleveland is not to be ignored in this rivalry. Tomlin is going to want that winning record regardless if it means no playoffs. He also has arguably the better roster in this matchup as the Steelers did not have T.J. Watt available in Week 3 when they lost in Cleveland.

The Cleveland game was the nation’s introduction to George Pickens when he made that brilliant one-handed catch on Thursday Night Football. That helped Mitch Trubisky to one of his best halves of the season, but the Steelers faded in the second half, something we have seen with this offense a few times this year.

But we’ve also seen the offense come through at the end of the game the last two weeks, and the Browns are no strangers to blowing fourth-quarter leads this year, having done so three times already. The Browns are 3-5 in close games this year while the Steelers are 7-6.

Last week’s second half in Washington aside, Watson has been a major disappointment for the Browns. We know he is prone to taking bad sacks, and that could be trouble against T.J. Watt and company. The Pittsburgh defense has been great since the bye week save for one game against the Bengals. But the Browns are not the Bengals. They have more in common with the Atlanta, Indianapolis, Carolina, and Baltimore teams the Steelers have defeated down the stretch here.

Trust the Steelers to play well at home and get this win for coach Tomlin for your NFL bet of the week. Let the streaks live in Pittsburgh.

Be sure to bookmark our NFL picks page for more betting tips.

The last game between these teams should have ended 23-17, or under 40.5 points, but the Browns just had to score a junk touchdown on a fumble on the final snap for a 29-17 finish. It’s the kind of nightmare finish for under bettors that you see a couple times a season. Hopefully these teams got it out of their system then.

Touchdowns have been hard to come by for both offenses in recent weeks. Watson led the Browns to three offensive touchdowns in his first 18 quarters this year before getting three in Washington in the second half last week after some embarrassing tackling and coverage by the Commanders against Amari Cooper. The Steelers are more disciplined than that, though they do have some struggles in the secondary. They just haven’t faced many good quarterbacks able to take advantage of it, and the Watson we have seen in 2022 is not up to the level of Josh Allen (Bills), Joe Burrow (Bengals), or Jalen Hurts (Eagles). Those were really the only three offenses to embarrass this Pittsburgh defense this year.

In fact, Pittsburgh has held nine of its last 11 opponents under 19 points this season. Only the Eagles (35) and Bengals (37) topped that number. This is one of the main reasons the Steelers have turned around their 2-6 record. The offense has only produced one touchdown drive in each of the last two games, but that gets overlooked when it comes at the end of the game to win it.

Maybe the Steelers work their late-game magic for a third week in a row in this one. But 20-17 would be an optimistic prediction for an entertaining, low-scoring game between these teams. It could be uglier than that, so we will take the under.

Frequently asked questions about the Browns vs. Steelers game in Week 18

Since 2020 under Kevin Stefanski, the Browns are 10-7 ATS as a road underdog, which is about an average record in that split.

Be sure to visit our player prop picks and daily NFL predictions.