The Washington Commanders (7-7-1) are making a bold move to go back to quarterback Carson Wentz, benching Taylor Heinicke after the team was 5-3-1 in his starts. Heinicke’s QBR was 12.6 points higher than Wentz’s QBR this season.

Cleveland (6-9) has already been eliminated from the playoffs, but Washington is hoping the tie helps them out in the standings when all is done. But the team better find a way to win here after going back to Wentz after Heinicke had a couple miscues against the best defense in the league (49ers) on the road.

The NFL Week 17 odds have the Commanders as a 2-point home favorite with a total of 41 points.

Players to watch in the Browns vs. Commanders game

Myles Garrett: He only needs 3.0 more sacks to set a career high for the second year in a row after 16.0 sacks in 2021. This season has not played out the way Garrett hoped it would but matching up with Carson Wentz is a gift to any pass rusher these days. Garrett could have a big game in this one and is always a threat for a strip-sack.

Terry McLaurin: The wide receiver has made his first Pro Bowl in four years, but we will see if he can keep up the steady connection with Wentz as his quarterback. McLaurin averaged 61.2 yards per game with Wentz starting compared to 80.6 in Heinicke’s nine starts.  The Browns have a solid corner in Denzel Ward, which could be a fun matchup to watch in this one. 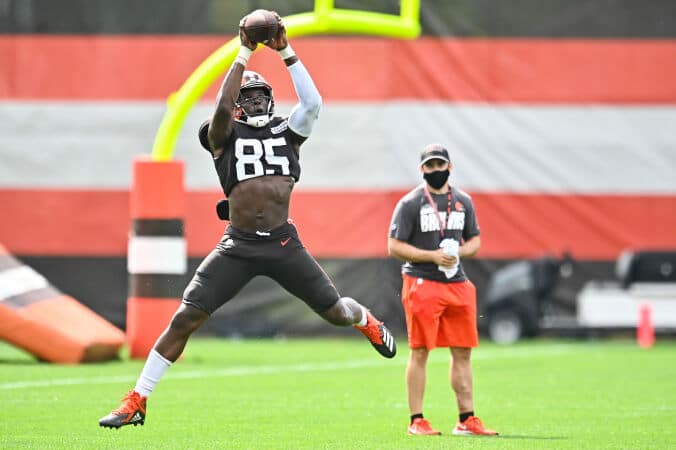 Our Best NFL Bets for the Browns vs. Commanders game

We have two NFL Week 17 predictions for this matchup with Washington trying to get a wild card spot.

The Browns vs. Commanders spread opened with the Commanders as a 1.5-point home favorite. It has gone up to 2 or 2.5 points at many sportsbooks.

With Brissett at quarterback, you could actually count on this Cleveland team to win games with its offense. Nick Chubb was pursuing the rushing title, Amari Cooper was doing a good job in his team debut, and tight end David Njoku was having a rare breakout season in Year 6.

But whether you want to call it rust or a bad fit, Watson has just not picked up this offense yet in four games. The weather was lousy last week, but that still didn’t stop the Saints, a dome team, from putting up more points than the Browns in Cleveland.

Even Chubb’s rushing effectiveness has tanked since Watson took over. He is averaging 4.01 yards per carry over these four games, bringing his season average down to 4.9 yards. It would be the first season of Chubb’s career where he did not average at least 5.0 yards per carry.

Chase Young returned for Washington’s defense last week too, and it was a solid unit to begin with. The Browns are going to have their hands full there, and the expected low score is why the Commanders should be a good pick to pull this one out.

These teams are similar in structure with the Commanders relying on a two-headed running back combo in Antonio Gibson and Brian Robinson, and the wide receiving corps is actually deeper in Washington. Then Young is hoping to be the Myles Garrett of the defense, but he has to stay healthy first.

But Washington has to make sure the ball is coming out on time with Wentz, and he is not making the killer mistakes that led to his benching. Cleveland’s defense is below average, and the Browns are 1-8 when they allow more than 17 points this season. This is the kind of opponent he can beat.

Let’s go with the home team with more to play for to cover for your NFL bet of the week.

Be sure to bookmark our NFL picks page for more betting tips.

The last time we saw Wentz start a game, it ended 12-7 in Chicago. He won’t have a broken finger like he did that night, but his last four starts have not gone over 38 points.

Washington’s previous four games before the 37-20 loss in San Francisco did not break 40 points either. This team has largely been involved in close, low-scoring games this season.

The Browns had some shootouts earlier in the season, but ever since Thanksgiving and the changing of the weather, the highest-scoring Cleveland game was 27-14 in Houston, a game that featured three return touchdowns by the Browns and zero offensive touchdowns in Watson’s team debut.

The last three Cleveland games since haven’t even been able to reach 35 points. A score like 20-17 seems more than reasonable as a best-case scenario for a matchup like this. We can confidently bet the under on this matchup.

Frequently asked questions about the Browns vs. Commanders game in Week 17

Since 2020 under Rivera, Washington is 7-6 ATS as a favorite. That may not sound like much but it is the fifth-best record in the league in that time.

Since 2020 under Stefanski, the Browns are 12-10 ATS as an underdog, which ranks 21st in the NFL during that time.