The Cincinnati Bengals (8-4) are shooting up the power rankings, the AFC standings, the Super Bowl odds, and maybe even the MVP race for Joe Burrow after knocking off the Chiefs for the third time in the year 2022.

But the fact remains that Burrow is 0-4 against the Cleveland Browns in his career, and the Bengals played their worst game of the season on Halloween in a 32-13 loss in Cleveland. Now we get to see the rematch with Burrow having Ja’Marr Chase back at wide receiver.

The Browns are also different with Deshaun Watson at quarterback, but his debut did not go well in Houston. The Browns won the game 27-14 but the offense failed to score a touchdown. The Browns relied on three return touchdowns (two defensive returns, one punt return) to lead the way in Watson’s first game since the 2020 season ended.

Watson can blame it on rust, but he has to be sharp against a hot Cincinnati team that is healthy and rolling. Watson is 2-22 in his career when his opponent scores more than 25 points. The Bengals have not scored fewer than 27 points at home since that shocking Week 1 loss to the Steelers.

The NFL Week 14 odds have the Bengals as a 5.5-point home favorite with a total of 46.5 points. Can an Ohio kid like Burrow finally get a win over the Browns?

Players to watch in the Browns vs. Bengals game

Myles Garrett: One of the biggest factors in Burrow not beating Cleveland is the dominance of Myles Garrett. He has 6.0 sacks and a couple forced fumbles in four games against Burrow. He also tipped a ball on the opening drive last time that was intercepted. Elite pass rushers frustrate the Bengals’ line the most, and Garrett has been a beast in these matchups.

Ja’Marr Chase: He makes the whole offense better with his ability to turn short catches into big plays and what he does down the field as well. Burrow has only faced the Browns one time with Chase, and it was early in his career where he had some mistakes with a fumble in last year’s 41-16 loss. But the Bengals are healthy at receiver and Chase was sorely missed in the last meeting by Burrow. 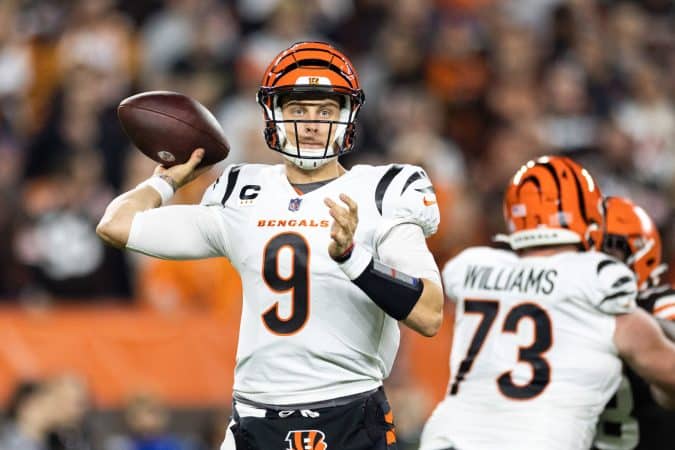 Our Best NFL Bets for the Browns vs. Bengals game

We have two NFL Week 14 predictions for this important rematch in the AFC North.

The Browns vs. Bengals spread opened with the Bengals as a 3.5-point home favorite. It has gone up to 5.5 at many sportsbooks with some even going up another half point.

In contrast with Kansas City, the Browns arguably have the better designed team to deal with the Bengals. The Chiefs go as Patrick Mahomes does, but the Bengals can get into a shootout with them and have been able to get enough pressure on Mahomes in the fourth quarter of those games.

But Cleveland has the dominant edge rusher in Myles Garrett to get after Burrow, who has taken 17 sacks in four games against the Browns. They have a solid corner in Denzel Ward who can handle one of these great wideouts. Then on offense, they have a dominant back in Nick Chubb, who has run wild on the Bengals.

But the hidden factor in Kevin Stefanski’s success has been getting great quarterback play out of Baker Mayfield and Jacoby Brissett against these Bengals. Sometimes it’s just play-action dominance and hitting big plays, but the Browns are carving up the Bengals without Pro Bowl-level quarterbacks.

Mayfield and Brissett have combined to complete 73.4% of their passes with 10.8 yards per attempt and a 134.7 passer rating against Burrow’s defense. The Browns have averaged 36.3 points per game in those four contests. Most quarterbacks would go 0-4 if their defense played like that.

But after what we saw last week from Watson, is he ready to have a game like this? We could see it happening next year for sure or maybe in January after he gets some experience. But he was not good last week and the Browns would have had an easier time with Brissett still starting.

The same can be said about this game. Stefanski may be 4-0 against Burrow without great quarterbacks but look for him to lose this first meeting with Watson under center. The Bengals are playing great football and getting in playoff mode after beating the Titans and Chiefs the last two weeks. Cleveland’s defense is not as good as Tennessee’s nor is the offense on par with the Chiefs. This is Burrow’s chance to shine at home and get his first win over Cleveland for your NFL bet of the week.

Nick Chubb is inevitable, but the Texans seemed to go away from him last week after a safety when he was in no man’s land getting the ball in his own end zone. But if given more opportunities, he would have easily cleared 100 yards against Houston.

Chubb has hit 80 rushing yards in 9-of-12 games this year. In the three games he did not reach 80, the Browns allowed 31-plus points and were largely playing from behind in the second half.

But we know Cleveland has played well and scored a lot against the Bengals. Chubb has rushed for 100 yards and two touchdowns in each of his last three games against Cincinnati’s starters. This has been one of his best opponents.

After not finding the end zone last week, look for better offense this week as Stefanski has a great read on Cincinnati’s coaching staff, which has featured the same head coach and coordinators since 2019.

Watson needs help in this road game, and Chubb’s rushing is the best friend he can have outside of the defense putting on another masterclass against Burrow. But Chubb is the player to trust here.

Frequently asked questions about the Browns vs. Bengals game in Week 14

The game is being played at Paycor Stadium in Cincinnati, Ohio