The Denver Broncos (3-8) are in for another tough one against the Baltimore Ravens (7-4), who are also coming off a bad loss in Jacksonville. The Ravens helped Jacksonville end a 41-game losing streak when allowing more than 20 points in the 28-27 upset last week.

The Ravens have led by multiple scores in all 11 games this season, but last week was already the fourth time the team blew a multi-score lead after halftime. The offense and special teams have also contributed to most of these blown leads, so it is not just about the defense.

But the defense should be under the spotlight this week as it has no reason not to play very well in this game. The Ravens held Denver to a touchdown in last year’s 23-7 win, and the Broncos are doing even worse this year with 14.3 points per game despite adding Russell Wilson.

But Wilson may have just had his worst game yet with 4.1 yards per attempt and 142 yards passing in Carolina, both season lows. Wilson has not played in Baltimore since the 2015 season when he threw five touchdown passes. Wilson has four touchdown passes since Week 5 this year.

Players to watch in the Broncos vs. Ravens game

Latavius Murray: He was the lone bright spot for the offense last week with 92 rushing yards in his first start of the season after the Broncos cut Melvin Gordon. Murray played for the Ravens in 2021 and probably wishes he was still there instead of this mess in Denver. But at least he is the lead back now.

Mark Andrews: With the Ravens having some struggles at receiver, it would be good if Andrews found the end zone again. He has not scored since Week 6. He has 63 and 50 yards in his two games since return from a brief injury. The Broncos have played well on defense this year, but they can be had over the middle. Andrews should have a good game. He had 67 yards against Denver last year. 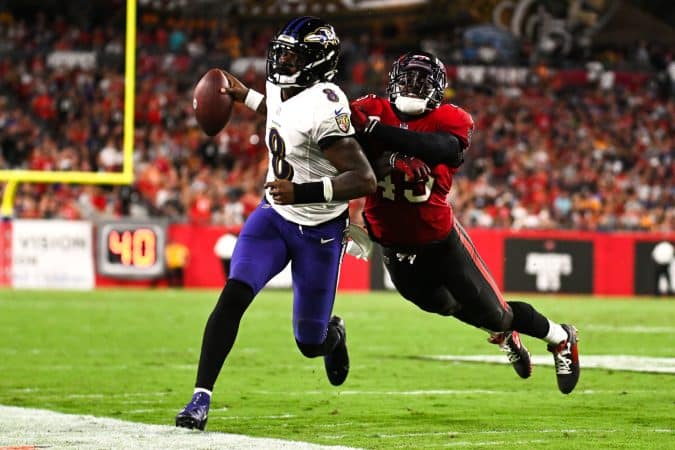 Our Best NFL Bets for the Broncos vs. Ravens game

We have two NFL Week 13 predictions for this AFC matchup that we thought was going to feature two contenders.

The Broncos vs. Ravens spread opened with the Ravens as a 6.5-point home favorite. The line has moved up to 8.5 points, but is that too high?

Your pick here probably depends on if you think it’s only going to get worse in Denver before it gets better. That was certainly ugly in Carolina last week, but we’ve seen the Buccaneers and Tom Brady lose 21-3 in Carolina this year too. Stuff happens.

The fact is last week was the first Denver game all season that was not within one score in the fourth quarter. Most of this team’s games have been very close and that is a credit to the defense.

With Baltimore, we know many of that team’s games have been close in the fourth quarter because the Ravens cannot seem to hold leads anymore this year. They just blew a 19-10 fourth-quarter lead in Jacksonville to a team that never makes comebacks like that.

There has been plenty of social media distractions for these teams this week with Lamar Jackson’s deleted tweet directing an insult at a fan, and the alleged fallout over Wilson’s teammates barely showing up for his birthday. The fact is neither is playing that great right now, but Jackson is doing better and should get the win at home.

But can Wilson do enough to get a backdoor cover in a low-scoring game? Absolutely. The Ravens are not sharp enough on offense to think this will be some 20-plus point blowout.

The most profitable pick (spread or total) to bet on the NFL this season has been the under in Denver games. It is 10-1, and after last week, it does not seem to matter how low the number is set. The Broncos will find a way to deliver by not delivering.

The under is also 7-4 in Baltimore games, so that’s pretty good too. We have seen Lamar Jackson throw just seven touchdowns in his last eight games while averaging 6.33 yards per attempt. That is more than a full yard below his career average.

That still beats what we are seeing from Wilson, who is struggling to lead this offense so much that the Broncos have their fewest points scored through 11 games since the 1966 season.

Denver’s defense is better than Baltimore’s, and that should be enough to keep the game close enough and low scoring for 60 minutes. We like that combo of the Denver cover and under hitting, but the under 39.5 points is our NFL bet of the week here.

Frequently asked questions about the Broncos vs. Ravens game in Week 13

The game is being played at M&T Bank Stadium in Baltimore, Maryland.

Only half the Denver team shows up on game days, so they were just being consistent!

Be sure to bookmark our player prop picks and daily NFL predictions.