Check out the Boston Celtics vs. Milwaukee Bucks Game 6 live streaming options. The Milwaukee Bucks were down by double-digits in Game 5 but managed to win with an outstanding performance in the last minute of the game in the second round of the Eastern Conference in the NBA Playoffs. Now the Boston Celtics are under pressure to win on the road, if they fail to do so, the season is over for them.

How to watch Celtics vs. Bucks Game 6

The NBA League Pass is real enjoyment for every die-hard NBA fan. You can watch all the games live, share the screen and watch multiple games at once. You can also rewind or watch the game whenever you have time for it. With the NBA League Pass, you also have access to recaps and game highlights as well as many other videos.

Catch your games at home or on the go with Hulu. This platform streams live NBA games for a new price of $69.99/month.

The Boston Celtics had a very good regular season finishing second in the Eastern Conference. They started the Playoffs incredibly well dominating the Brooklyn Nets in the opening round and winning 4-0. Next in line was the defending champion Milwaukee Bucks and things do not look good for the Celtics at the moment. The Bucks managed to steal Game 5 in the last minute in Boston and now the Celtics are going to Milwaukee with their back against the wall. Boston needs to win on Friday night in Fiserv Forum or the season is over for them. The Bucks are definitely favorites to win in this one, mainly because of the home court but they also have the momentum and are a much more experienced team than the young Celtics squad. Anyway, the Celtics have proved that they can win in Milwaukee, as a matter of fact, they have only one loss on the road in these Playoffs.

Jayson Tatum will be the key player for the Celtics. Their leading scorer this season will have to perform well. Tatum had many ups and downs during the Playoffs and is coming off a 34-point performance in Game 5 which was still less than Giannis Antetokounmpo who scored 40 points. Jrue Holiday has been the key man for the Bucks’ success so far in the series. The point guard made two crucial steals in the final minute of Game 5 to lift the Bucks over the Celtics. Holiday has also improved his three-point shooting during the series which definitely has a huge impact on the Bucks.

However, Game 6 will be a real Playoff battle and a fun game to watch for every die-hard NBA fan.

For a more detailed analysis of the Celtics vs. Bucks Game 6 make sure you check out our prediction article. 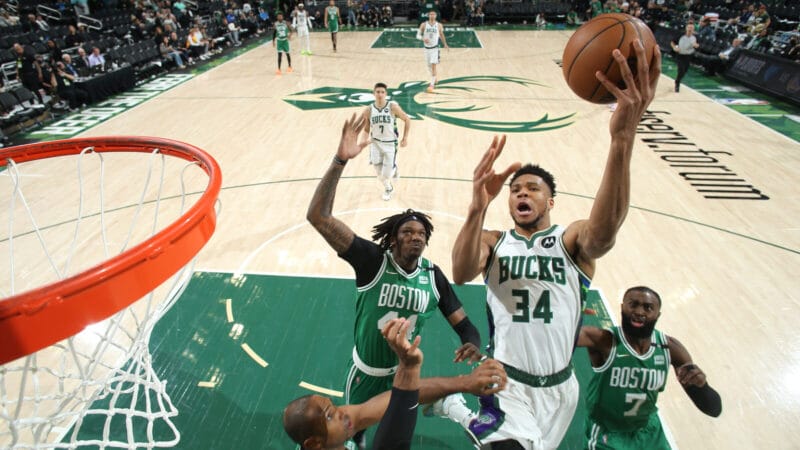 FAQ about Celtics vs. Bucks Game 6

The Milwaukee Bucks lead the series against the Boston Celtics 3-2.

The Milwaukee Bucks are 1.5-point favorites to win Game 6 against the Boston Celtics.

The over/under margin is set at 211 points.

Khris Middleton is still unavailable for the Bucks after he went down in the opening game of the Bucks series against the Chicago Bulls.

Whoever wins this series will play the winner of the series between the Miami Heat and the Philadelphia 76ers in the Eastern Conference Final.