Just when we though that the Heat are done in these Eastern Conference Finals after two bad performances and losses, they found strength to win again in Boston and force Game 7. So, now it all comes down to one game, in Miami, and the winner will get to play the Warriors in 2022 NBA Finals. The 2022 NBA playoffs are nearing the end since we only have NBA Finals left once Game 7 of the Celtics vs Heat series gets played, but these are the most exciting parts of the playoffs.

In any case, the Celtics will have another chance to secure a meeting with the Warriors after they failed to do so in Game 6 at home. Of course, the Heat will now host Game 7 since they were the better seed, but the Celtics did beat them in Miami twice in these series, so they certainly have the confidence and belief that they can do it again. And just like in Game 6, all Boston players should be available for Game 7 too, despite injury issues earlier in the series.

Meanwhile, the Heat were written off by most people ahead of Game 6 since they had issues with injuries and they were pretty poor in the two games prior to Game 6. Lastly, this game was played in Boston, so it’s no wonder that many already saw the Celtics in the NBA Finals. But the Heat came out to play and win, which they did led by the amazing Jimmy Butler. So, now Miami has a chance to secure a duel with the Warriors with a win in Game 7 at home. 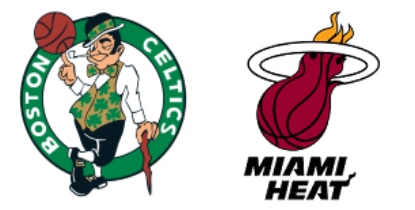 Despite their failure to secure a place in the NBA Finals with a win at home in Game 6, the Celtics are once again favorites for Game 7. The bookies set the spread on Celtics at -2.5 points, so they are clearly not huge favorites, but this is somewhat surprising considering the fact that the Heat are hosting Game 7 as the top seed in the conference.

Meanwhile, the line for total points dropped by a lot compared to the last game, despite Game 6 going over the line. So, the line is now set at 195.5 total points, which might seem extremely low, but these are two teams capable of great defenses and with the next game being Game 7 where winner takes all, it’s clear why the line is set so low.

Before we get on with our betting predictions for the Miami Heat vs Boston Celtics series Game 7, you should check our NBA daily betting picks and NBA playoffs parlay tips.

Now, here are our picks and predictions for Sunday’s NBA matchup between Boston Celtics and Miami Heat:

Boston Celtics to Win on Money Line @ -140 (Odds via FanDuel)

Just like the bookies who still consider the Celtics the favorites to reach the NBA Finals, we are sticking with Boston as well. Yes, we expected them to clinch the series in Game 6 at home, but Miami showed that they are the top seed in the East for a reason and that they won’t go down without a fight, which seemed like the case after Games 4 and 5.

So, the Heat will have the home-court advantage in what is essentially an elimination game for both teams, but we can see the Celtics winning this one. The Celtics showed in these playoffs already that they can leave bad losses behind them and bounce back in the next game, which is exactly what we expect to happen now. Also, the Celtics are complete, while the Heat could once again be without Tyler Herro, which could be the deciding factor in this game.

While we suggested betting on under total points in most of the games in the Celtics vs Heat series, we decided to go a different way for Game 7. First of all ,four of the six games in the Eastern Conference Finals have gone over the line for total points, so Game 7 going over 195.5 total points would hardly be a surprise.

Secondly, the line is simply set too low for our liking. Yes, it is Game 7 and yes, these are two teams that can play lockdown defense as we’ve seen in these playoffs. But despite this, the line is set too low in our opinion and we can see Game 7 going over that line.

As we expected, Jimmy Butler came into Game 6 aggressively after he struggled in the three straight games in the series, which was partially cause by a nagging injury he’s been dealing with. But with the series on the line, Butler once again proved that he is the true leader of this Miami team and he finished the game with 47 points, 9 rebounds, 8 assists, and 4 steals.

That is a very impressive stat line and it was one of Butler’s best performances in his career. So, heading into Game 7, we expect Butler to lead the way for the Heat once again. Even if Tyler Herro ends up suiting up for this game, Butler will still be the primary offensive weapon for Miami and we can see him scoring at least 29 points.