The Buffalo Bills (8-3) are 0-2 in division games this year as they take on the New England Patriots (6-5) in the first of two big matchups late in the season. The Bills were able to win a close one in Detroit on Thanksgiving while the Patriots fell later that same night in Minnesota in a high-scoring loss.

The Patriots beat the Bills 14-10 in Buffalo last year, but it was a game infamous for extreme wind and the Patriots only throwing three passes. When the teams met again in less windy conditions, the Bills destroyed Bill Belichick’s defense, never needing to punt in either game.

In the playoff meeting, the Bills had arguably the greatest offensive performance in NFL history as they scored a touchdown on all seven of their possessions. Josh Allen has destroyed New England with 13 touchdown passes and zero interceptions in his last four meetings with them.

The weather forecast for Thursday night looks fairly normal. Not a wind game, not a snow game, just a little December chill. Are the Patriots going to be toast again? The NFL Week 13 odds have the Bills as a 4-point road favorite with a total of 43.5 points.

Players to watch in the Bills vs. Patriots game

Isaiah McKenzie: He surprisingly became the go-to receiver in Detroit with 96 yards and a touchdown. McKenzie had perhaps the best game of his career last year when Cole Beasley was out, and he had to shine in the slot against New England. McKenzie had 11 catches on 12 targets for 125 yards and a touchdown. Allen trusts him, so we’ll see if he has another big one in him here.

Rhamondre Stevenson: Just when you think he’s going to be the lead back, Belichick starts going back to Damien Harris. But Harris cannot stay healthy, so Stevenson shined against the Vikings with nine catches for 76 yards. He has gone over 50 yards receiving in four of the last five games, showing some real dual-threat ability. He’ll be important here to keep the Bills on the sidelines. 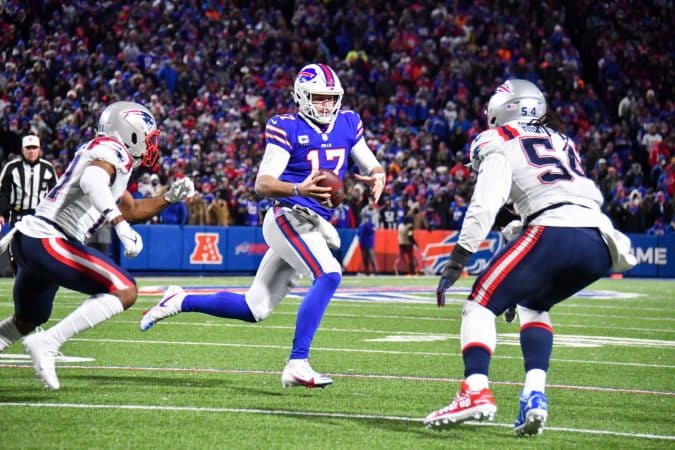 Our Best NFL Bets for the Bills vs. Patriots game

We have two NFL Week 13 predictions for this big AFC East matchup on Thursday.

The Bills vs. Patriots spread opened with the Bills as a 6-point road favorite. The line has moved down to 4 points though. The Bills have only covered the spread once in the five games since their bye week.

We know the Bills won’t have Von Miller in this game, but he at least avoided a season-ending injury. Still, it would be tough if the Bills were down their top three pass rushers, but the news sounds optimistic that Gregory Rousseau (5.0 sacks) and A.J. Epenesa (3.5 sacks) can play. Mac Jones has taken at least three sacks in four straight games.

Look, the Patriots played a fun, high-scoring game in Minnesota seemingly out of nowhere last week, but this team is not built for shootouts. The 2022 Patriots are 0-5 when they allow 20-plus points and 6-0 when they allow under 20 points.

Jones is 2-11 when the Patriots allow more than 17 points. When the weather is fine, Belichick has not proven he can stop this Buffalo offense with Allen playing at a high level. Allen was not super sharp against Cleveland or Detroit, but he made the key plays and the Bills pulled out the win.

Jones has one fourth-quarter comeback in his career. He needs the game to play out a certain way to win, and the Bills are usually too good to let that happen. Plus, it is hard to shake the fact that Buffalo did not punt once in either of the last two games against New England.

Take the Bills to cover for your NFL bet of the week. This team is not going 0-3 in the division and losing to what is now the worst team in the division, New England.

It is fair to assume that Josh Allen is not 100% with the elbow injury, but the Bills have scored 30, 31, and 28 points in the three games since it was announced he has one. That’s pretty good even if the passing game hasn’t looked its best in those games and his MVP odds have fallen way off.

Some of his decision making, especially in the red zone, has been a bigger red flag than his physical condition. If we needed any proof he can still rip the ball, just look at that brilliant throw on a rope 35-to-40 yards down the field to Stefon Diggs to get the Bills in position for the win in Detroit.

Even in single-digit temperatures with snow in the playoffs, Allen had more touchdown passes (five) than incompletions (four) in his last meeting with New England, and we know the 2021 defense was statistically strong in the regular season. Better than this year’s unit that has feasted on Sam Ehlinger and Zach Wilson (twice) in recent weeks.

And he’s done it two years in a row in Buffalo wins of 38-9 and 33-21. Trust him to lead another onslaught this Thursday and score over 25 points.

Frequently asked questions about the Bills vs. Patriots game in Week 13

The game is being played at Gillette Stadium in Foxborough, MA.

You can always check out our player prop picks and daily NFL predictions.