The bonus code USBET can be used during registration but does not change the offer amount in any way. Note that it is entirely optional to enter a bet365 bonus code when you register.

***Applies to pre-game straight bets and parlays (including all options) on the Money Line market for any NBA game up to and including June 19th 2022. Bet restrictions and T&Cs apply. New and eligible customers only.

Use Bet365 Promo Code to bet on Nuggets vs. Warriors game

Steph Curry got back on the court in a new role as a sixth man for the Warriors and that paid off in Game 1 of the first round of the Western Conference Playoffs. Steve Kerr’s team dominated the Nuggets throughout the game for a final 123-107 win. Jordan Poole, who is one of the frontrunners for the Sixth Man of the Year Award, took over Curry’s starting spot and scored 30 to lead the Warriors to a win.

Nikola Jokic was on his recognizable level in Game 1 but he will need more support from his teammates if the Nuggets want to increase their chances of winning Game 2. That help is more needed on the defensive end as the Warriors shot over 52% from the field and 35% from three-point territory in the opening game of the series. The Nuggets defeated the Warriors three times during the regular season and they definitely will put on a fight in Game 2.

Betting with Bet365 offers an Open Account Offer for up to $25 in Bet credits. All you need to do is sign up, deposit $5 or more to your account and Bet365 match your qualifying deposit in Bet Credits for up to $25 when you place qualifying bets to the same value and they are settled. Make sure you use the Bet365 code USBET when signing up for your Bet365 account.

Bet365 is legal in the state of New Jersey and also in Canada, Mexico and Brazil. In Europe, it is legal in 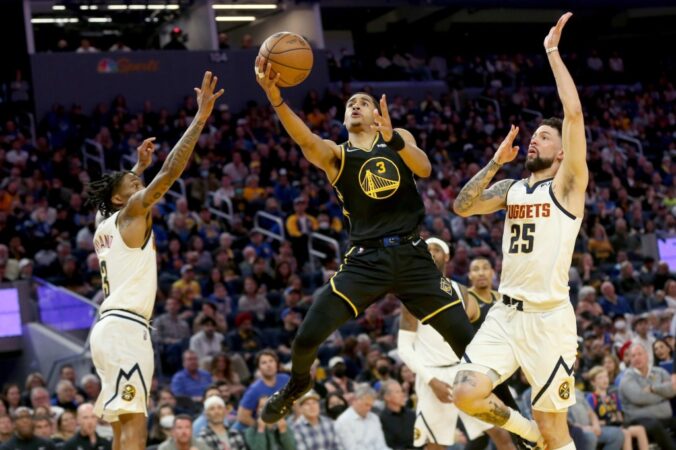 Use Promo Code to get Bet365 Opening Account Offer

Create your account, deposit at least $5 and Bet365 match your qualifying deposit in Bet Credits for up to $25 when you place qualifying bets to the same value and they are settled. This offer is valid for new customers only.
Once you meet the qualifying conditions, you can use your Bet Credits to stake bets without risking your own cash. Bet Credits can be used to bet on the Nuggets vs. Warriors Game 2 or any other game for which you can check our daily expert NBA picks. Any returns from bets placed with Bet Credits are added to your Withdrawable Balance, returns exclude your Bet Credits stake. You can also fund a bet with a combination of Bet Credits and cash.
Get the Bet365 NBA Playoffs Offer How the Early Pay Out Offer works:

Can the Nuggets tie things up in Game 2

The Golden State Warriors are 7-point favorites going into Game 2 of the series after they defeated the Nuggets by 16 points in the opening game. It is hard to believe that the Warriors will have that good of a shooting percentage in Game 2 and that two players will score 5+ three-pointers. The Nuggets will definitely need to pick up their defense in order for that to happen but they have proved many times this season that they are capable of bouncing back. Nikola Jokic was defended well in Game 1 by Draymond Green and Kevon Looney but the reigning MVP will find a way to step up.

This is How to watch Game 2 of the Nuggets vs. Warriors series.