One of the greatest quarterbacks in NFL history, if not the best, Tom Brady will play host to a rising star in Joe Burrow on Sunday. Kickoff is slated for 4:25 p.m. and the matchup is being broadcasted on CBS.

Although Tampa Bay (6-7) owns a losing record, the team still remains atop the NFC South ahead of Carolina, Atlanta, (both 5-8) and New Orleans (4-9). If Brady and company were to win the division, they’d earn the No. 4 seed and host a game in the Wildcard round of the postseason.

The Bengals (9-4) are tied with the Ravens for the best record in the AFC North but are second in the standings due to their head-to-head record. Every game is crucial down the line if they are to win the division.

The first overall seed in the AFC, which will earn a bye, is still within reach since Buffalo is 10-3.

The Buccaneers have been hot and cold all season. After winning two straight games, the team has now dropped two of its previous three games. Last week, they were decimated, 35-7, by the 49ers.

Cincinnati is on a hot streak and has won five-straight games with impressive victories over Kansas City and Tennessee. In Week 14, the team easily took care of Cleveland (23-10).

The current moneyline odds for this matchup on Caesars Sportsbook are Cincinnati (-190) vs. Tampa Bay (+160). Oddsmakers favor the Bengals as 3.5-point favorites at -110 odds. Among the public, 85% of bets have been placed on Cincy to win outright and 62% of the money is on the Bucs to cover the spread.

Players to watch in the Bengals vs. Buccaneers contest

Joe Mixon: Many pundits believed Mixon would make the Pro Bowl this year but he’s had a slower year than expected. The Oklahoma product hasn’t scored in his last two games but does have 701 rushing yards and six touchdowns in 2022.

Mike Evans: The Texas A&M Aggie hasn’t been consistently on the same page with Brady as in past years. Evans’ recent five-game stretch has him averaging only 45.6 yards per game. He’s still on pace to reach 1,000 yards for a ninth-consecutive season. The 29-year-old has never had a year without reaching the 1,000-yard threshold which is an NFL record. 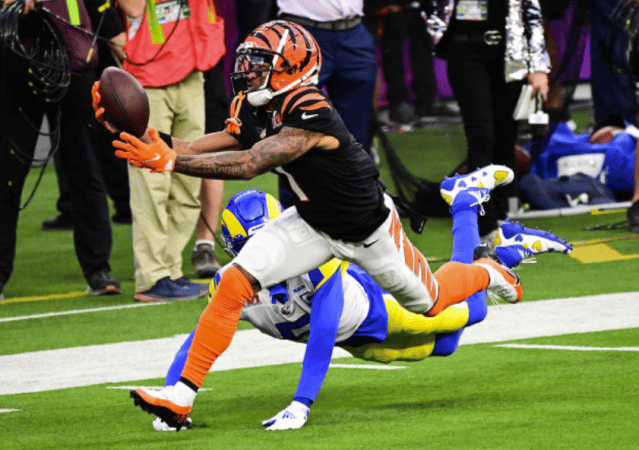 Our NFL bet of the week for the Bengals vs. Buccaneers

As much as Brady and Buccaneers’ fans don’t want to admit it, the offense has been awful and needs major changes if the team wants to be competitive in the playoffs.

The defense has been excellent for Tampa and that’s why they’ve been able to hover around a .500 record in recent weeks. The unit ranks 10th in total defense allowing 320.7 yards to opponents and is ninth in scoring defense (19.5 points per game).

Joe Burrow has risen up the board for MVP candidacy and is the third betting favorite at +750 behind Jalen Hurts (-165) and Patrick Mahomes (+190). Below are the former Heisman Trophy winner’s stats.

Our pick is to take a hot Bengals team that has won 7-of-8 games to cover an alternate 2.5-point spread at DraftKings (-110).

The Pro Bowl wide receiver has lit up secondaries for five touchdowns in his last four games.  Burrow’s best friend and college teammate has also scored in three-straight contests when the Bengals were favored.

Chase has seven red-zone targets inside the 20-yard line this year in nine contests but can score from anywhere on the field thanks to his speed and physicality. Chase will have plenty of opportunities to score Sunday with his average of 10.8 targets per game.

Our advice at ESTNN is to wager that Chase will break the plane Sunday at -110 odds on BetMGM Sportsbook. If you’re interested in learning about more prop bets for week 15, read our NFL player props page.

Frequently asked questions regarding Cincinnati vs. Tampa Bay in week 15

Chase was the fifth-overall pick in the 2021 NFL Draft.