Finally, we are getting the AFC matchup we wanted to see this year with Joe Burrow’s Cincinnati Bengals taking on Josh Allen’s Buffalo Bills in the AFC divisional round on 01/22/23.

We got about nine minutes of this matchup in Week 17 before Buffalo safety Damar Hamlin’s shocking cardiac arrest on the field that led to the game’s cancellation, the first time the NFL cancelled a regular-season game for non-labor issues since 1935.

Hamlin has recovered remarkably well, and there is a chance he will be in attendance this Sunday. The Bills obviously have suffered some losses to the secondary and with star pass rusher Von Miller tearing his ACL on Thanksgiving. But the Bengals have lost three starting offensive linemen late in the season, which seems to be inflating this spread as the Bengals are a very hard team to beat by a lot of points.

The NFL divisional round odds have the Bills as a 5.5-point home favorite with a total of 48.5 points. In those nine minutes in Week 17, we saw the Bengals take a 7-3 lead on a touchdown to Tyler Boyd, and they were driving for more at midfield when the unfortunate event occurred.

But here we are again in what should be an incredible game.

Players to watch in the Bengals vs. Bills game

Jackson Carman: We rarely highlight any one offensive lineman, but this is a unique case where starter Jonah Williams dislocated his kneecap, and Carman had to come in and play his first snaps of the season at left tackle against Baltimore. He is usually a guard and has not done much at that position in two seasons. This is a huge spot for Carman to start at left tackle on the road, but at least he won’t deal with a pass rusher as dominant as Von Miller. This is still a matchup to watch though as Burrow has struggled with sacks in losses.

James Cook: Brother of Dalvin, the rookie back has had some good moments this year. Now we see how much use he’ll get in what could be a passing shootout, but they have also been calling for an inch of snow in Buffalo, so watch out for that. The Bills should try to use their rushing advantage over the Bengals, who will need a great game out of Burrow. The Bills can use Cook or Devin Singletary, and Allen of course can run the ball well himself. That is the edge the Bills can use to their advantage in this one. 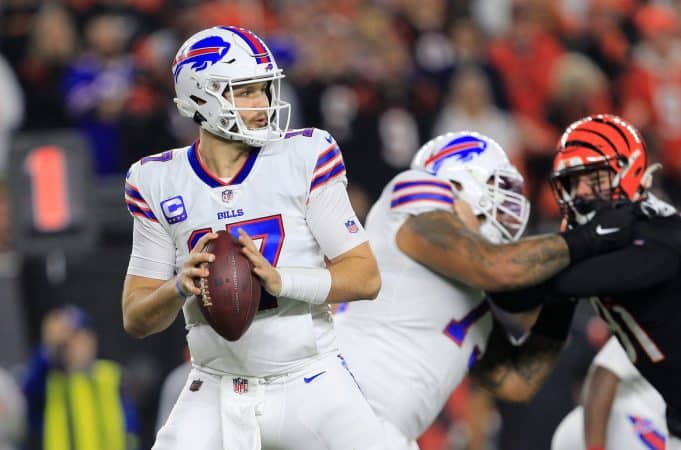 Our Best NFL Bets for the Bengals vs. Bills game

We have two NFL divisional round predictions for this much anticipated matchup of two great quarterbacks.

The Bengals vs. Bills spread opened with the Bills as a 4.5-point home favorite and it has moved around, but it seems to be settling on Bills -5.5 going into the weekend.

Neither of these teams had a great showing last week against backup quarterbacks, but those were division rematches against teams that played them well before. The big thing is they found a way to win as they often do. The Bills have won eight in a row and the Bengals have won nine in a row.

Simply put, this game comes down to sacks vs. turnovers.

Can the Bengals force enough turnovers to make up for the inevitable sacks and pressures faced by Burrow behind his line? The Bengals are incredible at getting takeaways in big games and they did it again last week with a fumble return touchdown off a quarterback sneak. The Bills have 30 turnovers in 17 games, the third most in the league, and they gave up a return touchdown on an Allen fumble to the Dolphins.

These turnovers are a serious problem for the Bills, who turned it over four times at home against the Vikings in their Week 10 loss, their last loss. That is the key to beating Buffalo. Make Allen make insane plays he shouldn’t be making. The Bengals can do that.

There is also the fact that in Buffalo’s seven games against teams with winning records – Steelers excluded since they were 2-6 and starting a rookie in his first start – every game has been decided by 2-to-4 points. The Bills are not blowing out any good teams this year.

That is why I like the Bengals to keep it close and cover this 5.5-point spread for your NFL bet of the week. But the Bills should still win this game, and that is something we will explain more in our next pick.

Both teams are great at scoring, but the Bills are better with the second-highest average (28.4 points per game) and the best third-down conversion rate (50.3%).

The Bills should be able to score 27-to-34 points in this game because they are incredibly balanced with a good running attack that averages 5.2 yards per carry, and they can attack you anywhere on the field with Allen and his receivers.

After Mahomes, Allen is without a doubt the best quarterback the Bengals have faced this year. The Bengals may have the better receivers, but the running game and offensive line are nowhere near as strong in this matchup. Still, the Bengals looked confident and sharp in Week 17 – all nine minutes of it – before the game was suspended. They are not going to have a poor number in this one, and it should be a 27-24 or 30-27 type of game.

Definitely taking the over in this game.

Frequently asked questions about the Bengals vs. Bills game in the divisional round

The game is being played at Hallmark Stadium in Buffalo, New York.